OddsSeeker looked into the history of casinos on film and identified 10 movie myths created about gambling or going to the casino. 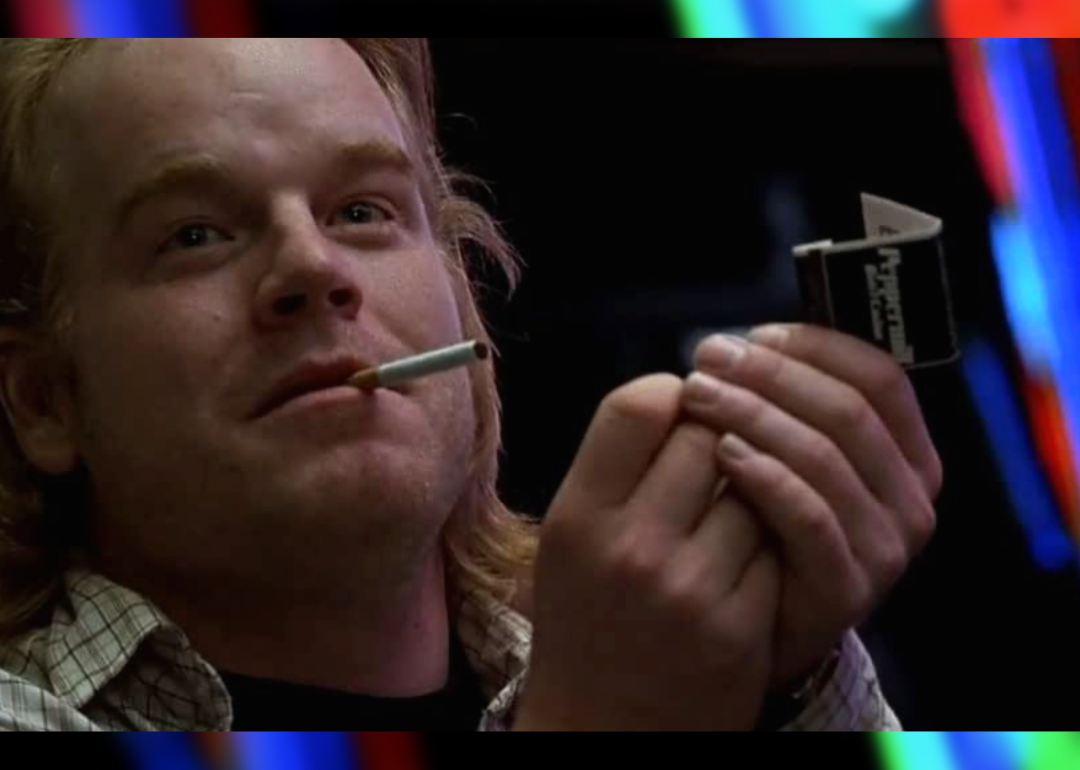 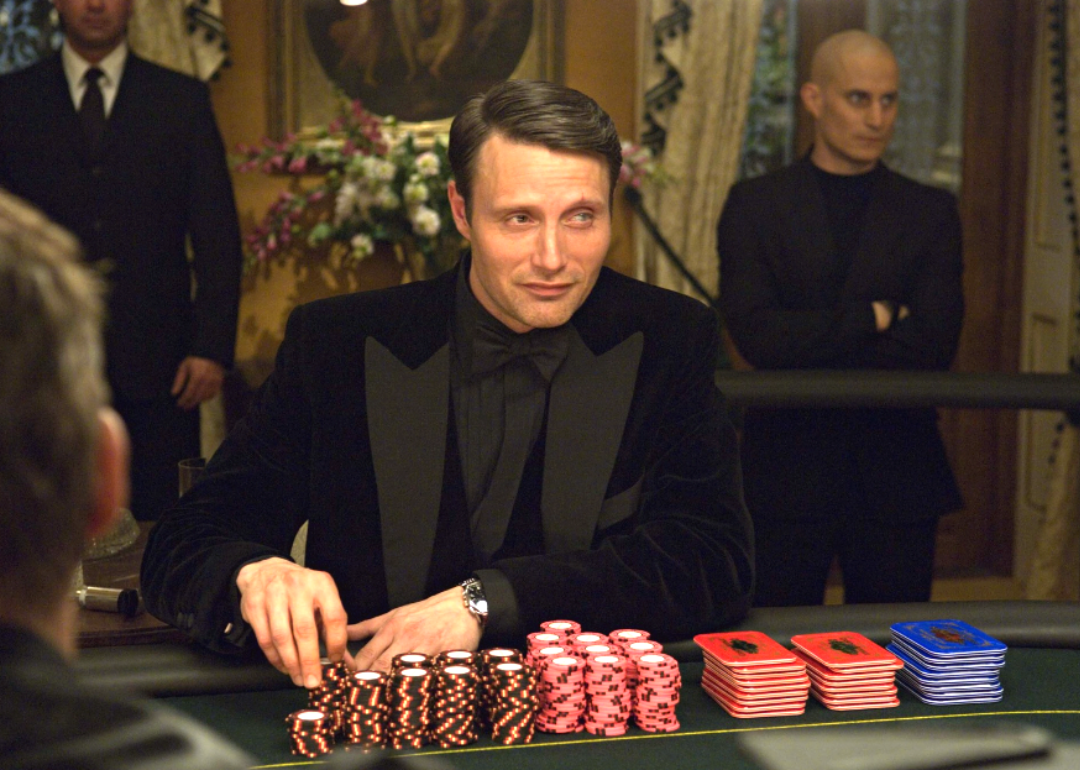 When has Hollywood ever not been a sucker for romance? And what's more romantic than a story about Sin City in all of its smoky, Strip-strutting, immoral glory where a down-on-their-luck underdog gets a second chance? Reality, however, can be much different from Hollywood portrayals of organized crime bosses patrolling smoky, anything-goes gaming floors full of no-limits tables where players hide card-counting devices beneath their slacks.

Though doors were briefly shuttered during the COVID-19 pandemic and patrons took their time returning, casinos are once again pulling in near-record winnings from players after more than two years since the pandemic began.

To shed light on how casinos truly operate, OddsSeeker looked into the history of casinos on film and identified 10 myths created in movies about gambling or going to casinos. In the regulated world of gambling, you would be hard-pressed to find a table that allows the player to bet as much money on a game as they wish. The reason why is summed up in one word—risk.

Casinos place limits on how much can be bet at a table to reduce the probability that one or a handful of players could get lucky and wipe out the entire business's profits—or some considerable portion. Imagine how many casinos could withstand multiple payouts like the one James Bond receives in "Casino Royale" after winning a $115 million pot in a single hand.

Pre-pandemic, the Las Vegas Sands saw $2.7 billion in profit across its 10 casinos, which included the Venetian and Marina Bay Sands in Singapore, according to filings with the U.S. Securities and Exchange Commission. That's $270 million per casino on average in earnings before paying out shareholders. (The company has since sold its U.S. holdings to focus on its casinos in Asia.)

Casinos are run by the mafia Gambling has a long history of being associated with society's seedier personalities when it's portrayed in the media. While there is a history of organized crime bosses skimming profits from casinos in the middle of the 20th century, that is no longer the case.

Casinos were brought out of the shadows and required to be transparent with their earnings in the 1960s by both private financiers as well as state and federal legislators. Howard Hughes is often credited as instrumental in this regard. Hughes, one of the richest individuals in the world during his lifetime, purchased several mafia-linked casinos on the Las Vegas Strip including the Desert Inn.

While stiff penalties at the state level in places like Nevada keep players from acting illegally, the SEC ensures casino businesses stay on the straight and narrow. The federal agency is mostly known for keeping an eye on Wall Street and corporate executives. However, the SEC also oversees gambling businesses to ensure gaming "is conducted honestly, competitively and free of criminal and corruptive elements," according to its website.

Big crowds cheer you on at your table 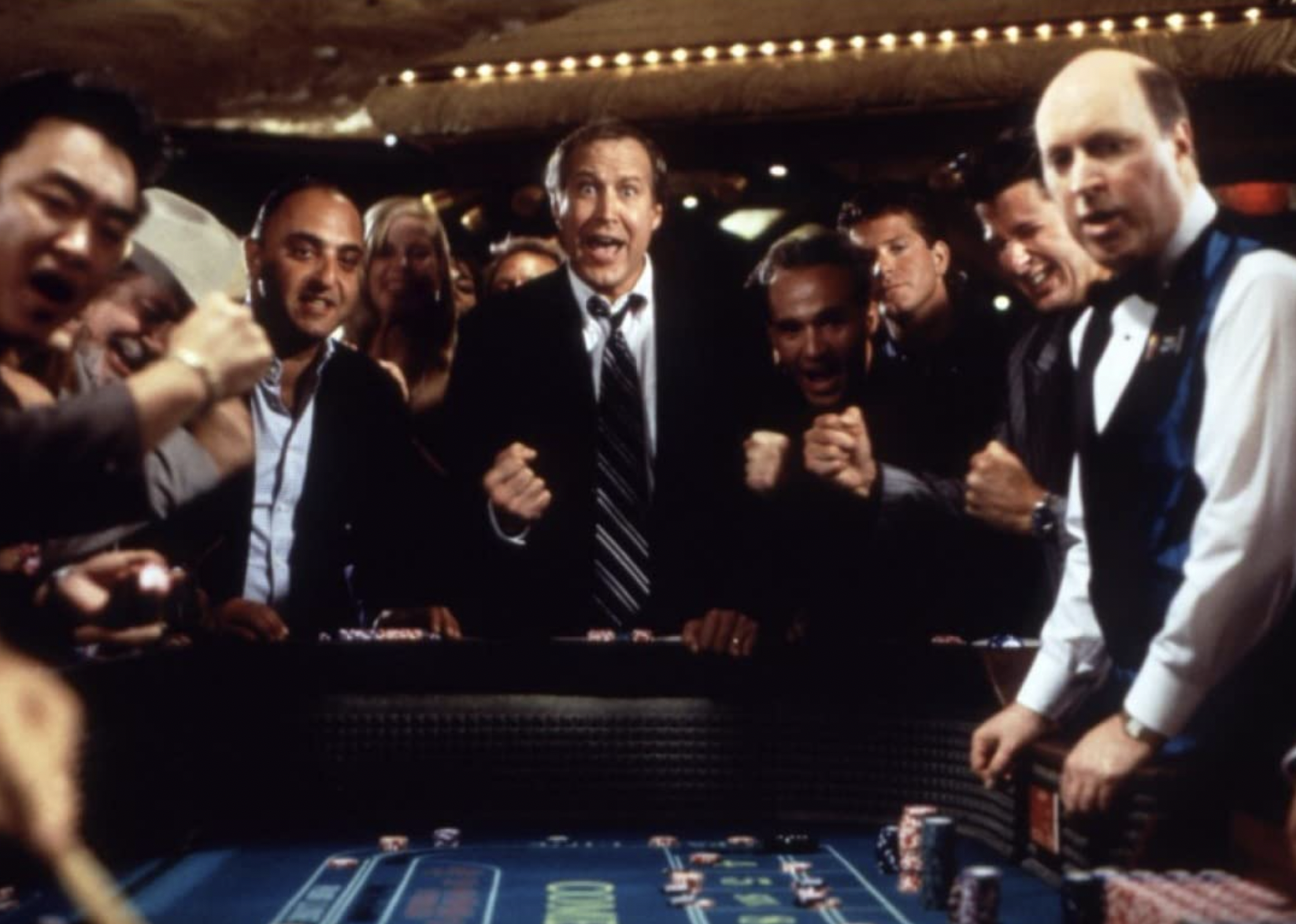 One of the best (and most underdeveloped) gags in National Lampoon's "Vegas Vacation" is when Clark Griswold's son Rusty obtains a fake ID and begins a dumb-luck winning streak that ends at the craps table while crowds egg him on. In reality, crowding around gaming tables makes protecting the integrity of the game much more difficult for casino managers.

The World Series of Poker goes to great lengths in coordinating security personnel and surveillance mechanisms while still allowing spectators to get close to the game. Odds are, though, your two-game win streak isn't going to garner a whole lot of attention from other casino guests. Researchers have found that gamblers win about 13.5% of the time. 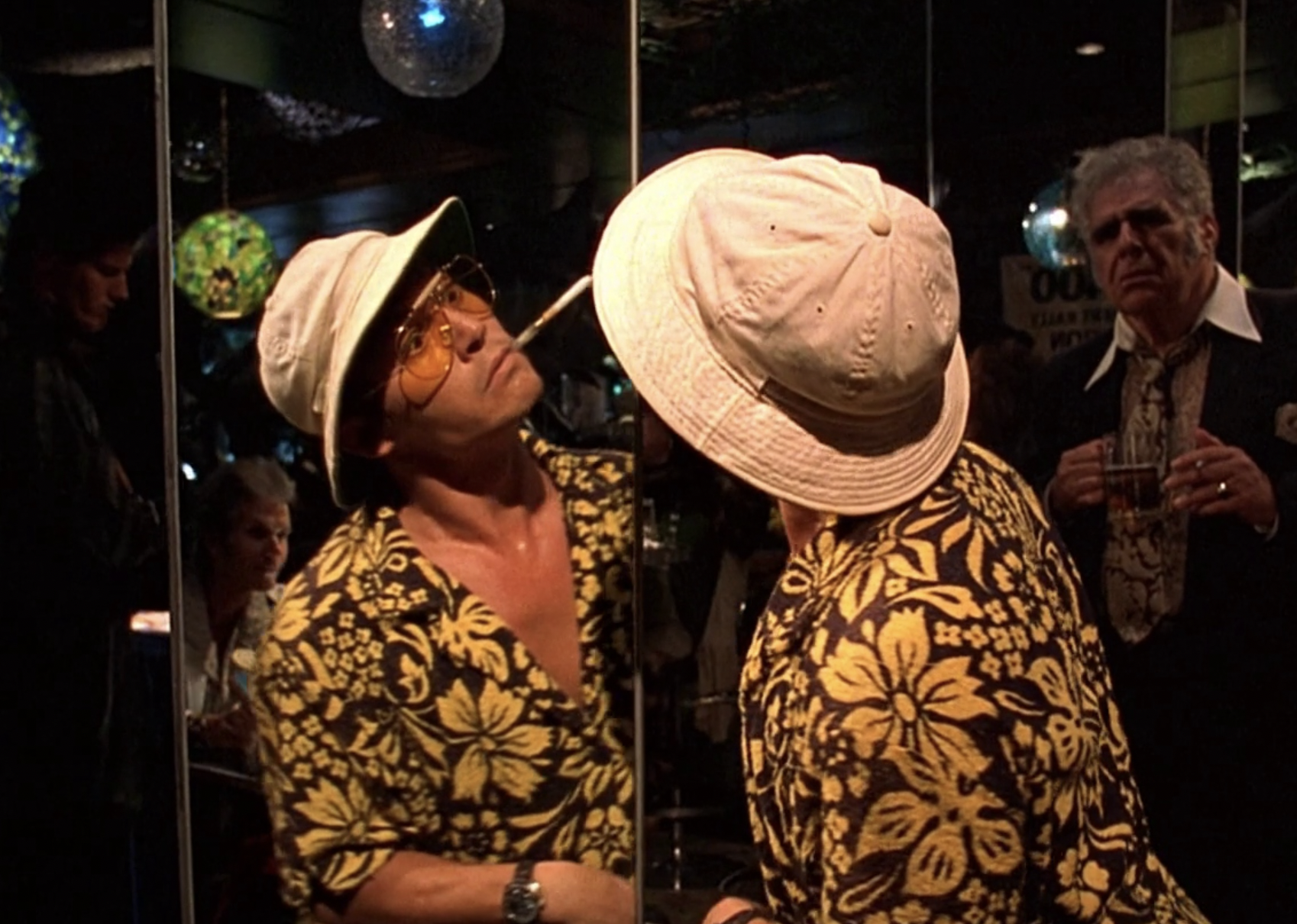 Thankfully for everyone, casinos are not exactly the no-holds-barred temple of debauchery depicted in some movies. Security isn't likely to look the other way while you stumble across a casino floor strung out on any manner of substances, muttering obscenities and demanding a high-end suite with a ripped cigarette hanging from your mouth like Raoul Duke in "Fear and Loathing in Las Vegas."

Running a casino is a risky business seeing as the industry is heavily regulated. Casinos are periodically required to submit detailed financial reports to regulatory bodies, pay licensing fees and gaming taxes, and may even have their backgrounds checked. That means these casinos have a number of rules in place that security won't be shy about reinforcing in conversation.

It takes a genius to count cards Counting cards is a practice often portrayed in films as illegal or immoral—and something only the most beautiful minds are able to do.

In the film "Rain Man," it's implied that Raymond's autism helps him and Charlie anticipate which cards are about to be played. When someone observing their table asks the pair of brothers their secret, Charlie jokingly replies, "cheating."

In reality, the probability of a certain card being played by the dealer is a game of mental math that many enjoy. It's a reason people enjoy games like blackjack and a large part of the attractiveness of card games in general. Though challenging, it isn't illegal unless you try to use a machine or other counting device at the game table. Perhaps one of the truer lines uttered by Robert De Niro's character in "Casino," casino manager Ace Rothstein, comes when he proclaims, "That's the truth about Las Vegas. We're the only winners. The players don't stand a chance."

That extends to card counting, which while not against the law, is not looked kindly upon by pit bosses on the casino floor who know that it gives players capable of it a slight edge over their dealers. A casino is for fun and games, but at the end of the day, it's also a business with operating costs and stakeholders to be paid out.

Some casinos may bar you from playing if they notice you are counting cards and gaining an edge on the dealer. Card counters beware—that win streak at the blackjack table likely won't go unnoticed by the cameras. 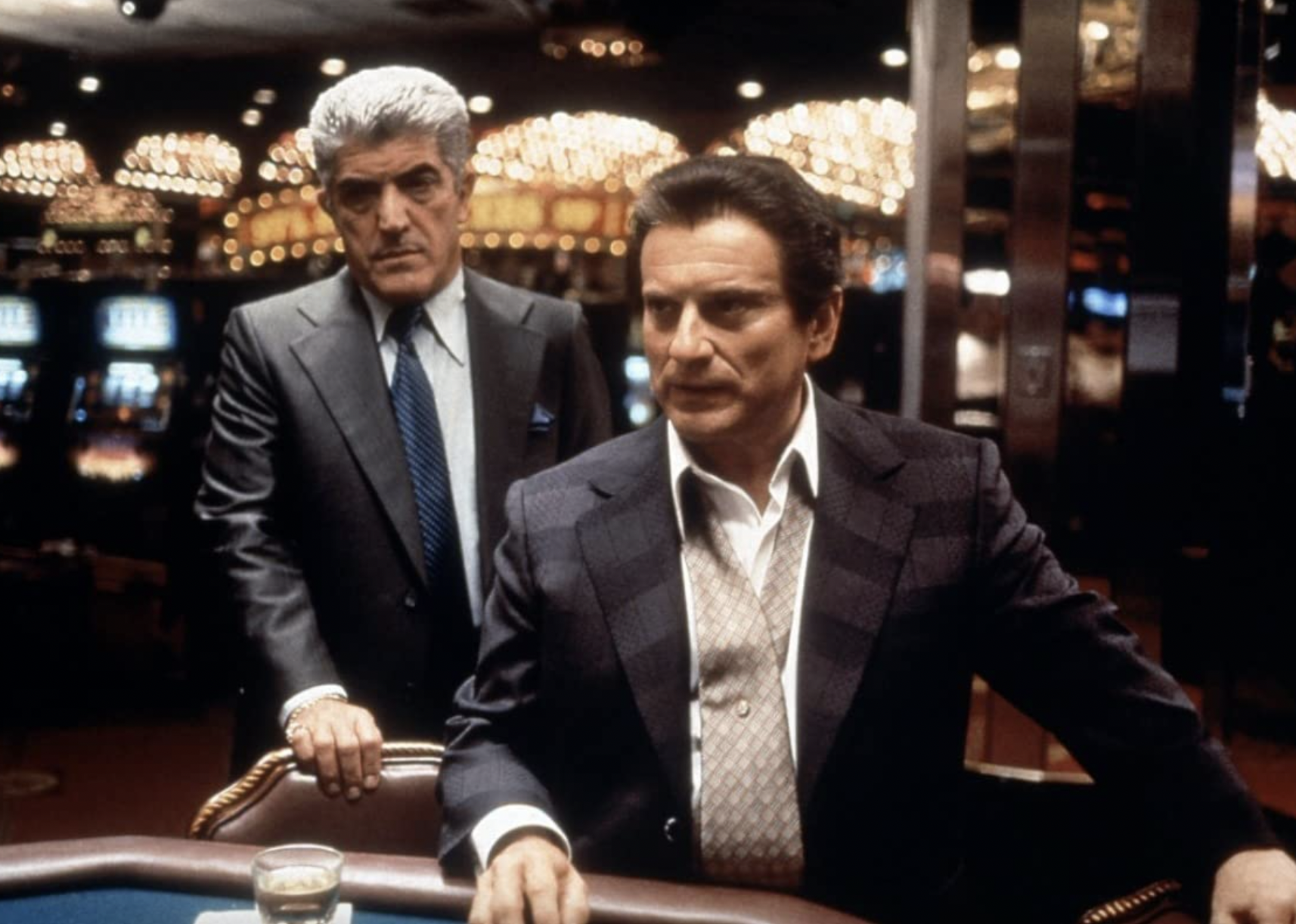 You're not going to get dragged out into a field and beaten with a baseball bat like Joe Pesci's character in "Casino," but gambling businesses do take cheating seriously. According to the FBI, their private security forces are legally allowed to detain patrons they reasonably suspect are cheating at casino games or committing any other crime on the property—and they don't have to Mirandize you either.

Going to the casino is a black-tie affair Bond films like "Casino Royale" perpetuate the myth that men stand around casino floors wearing suits and women walk around in cocktail dresses, but gone are those days. Today, most casinos have no such dress code. It's not abnormal to see patrons at a Las Vegas Strip casino playing poker in a bathing suit and cover-up or T-shirt and shorts. Just remember to check the dress code when visiting a specific nightclub or restaurant, as those tend to have different requirements.

You can fool the surveillance system If you're considering going full "Ocean's Eleven" this weekend at the Bellagio, the Mirage, and the MGM Grand casinos all while fooling the "eye in the sky," you might want to pause and think again.

Casinos are good at surveillance and invest in it because they have to. Gambling is closely scrutinized just about anywhere it is legal, and casinos in the U.S. are keen to move past the image organized crime syndicates of the 1950s unfortunately emblazoned on the industry. It's not just the cameras. Casinos employ physical security staff that must understand the complexities of games and be able to spot cheating.

It's full of smoke

In Paul Thomas Anderson's beloved indie flick "Hard Eight," the late Philip Seymour Hoffman taunts Phillip Baker Hall from across the craps table while lighting a cigarette, but those days may be waning. The Park MGM casino became the first in Las Vegas to be completely smoke-free in 2020. Aside from that, casinos in Nevada do get an exemption from anti-smoking laws. Casino employees in multiple states have been behind a recent push to get smoking outlawed in their workplaces, arguing the enhanced ventilation many casinos offer isn't enough to protect them.

This story originally appeared on OddsSeeker and was produced and distributed in partnership with Stacker Studio.

Women on quarters: Who they are and why it matters

Strategies during unpredictable times: How to make your money matter in the long term

5 ways IT admins can improve password management and security