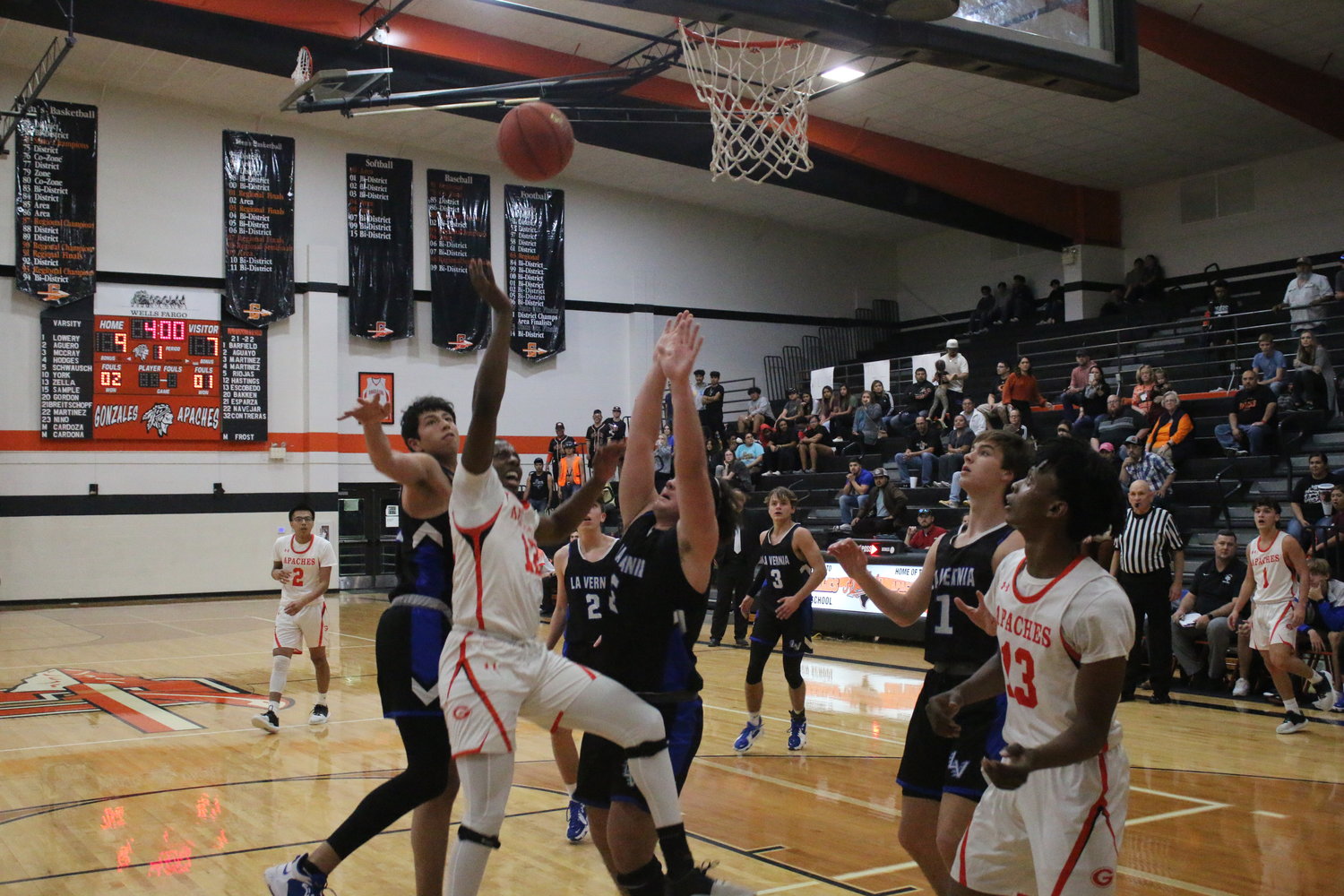 Gonzales’ Jeremiah Hastings gets fouled as he goes up for a shot against La Vernia on Tuesday, Feb. 1. Hastings made the shot and the ensuing free throw to put the Apaches up, 12-7. Gonzales would win the game, 63-57, to get payback against the Bears for an earlier loss.
Lew K. Cohn 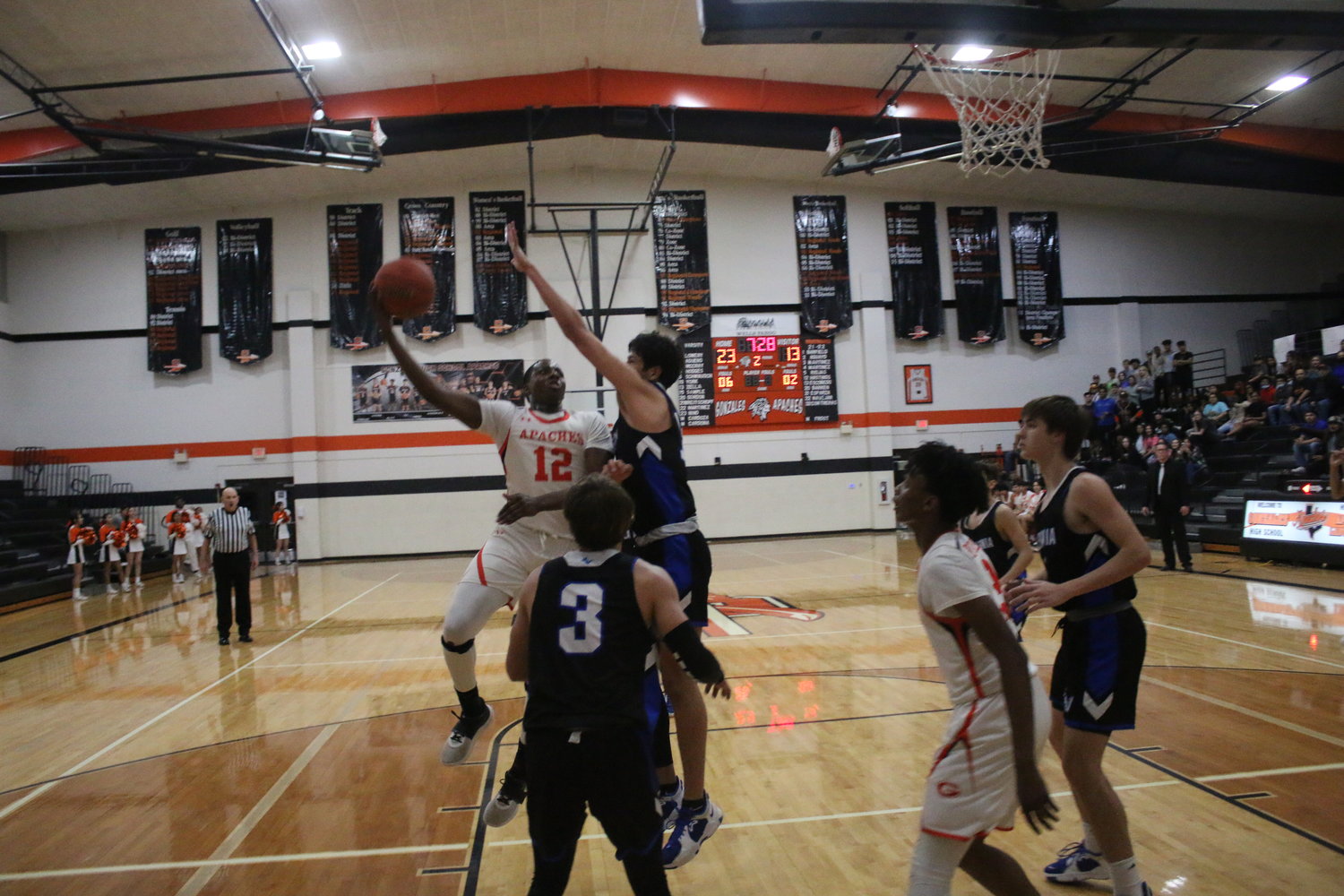 Jeremiah Hastings puts up a hook shot against La Vernia in the second quarter of Tuesday’s 63-57 Gonzales win. Hastings scored 24 points in the game and carried the team on his back at times in the contest.
Lew K. Cohn 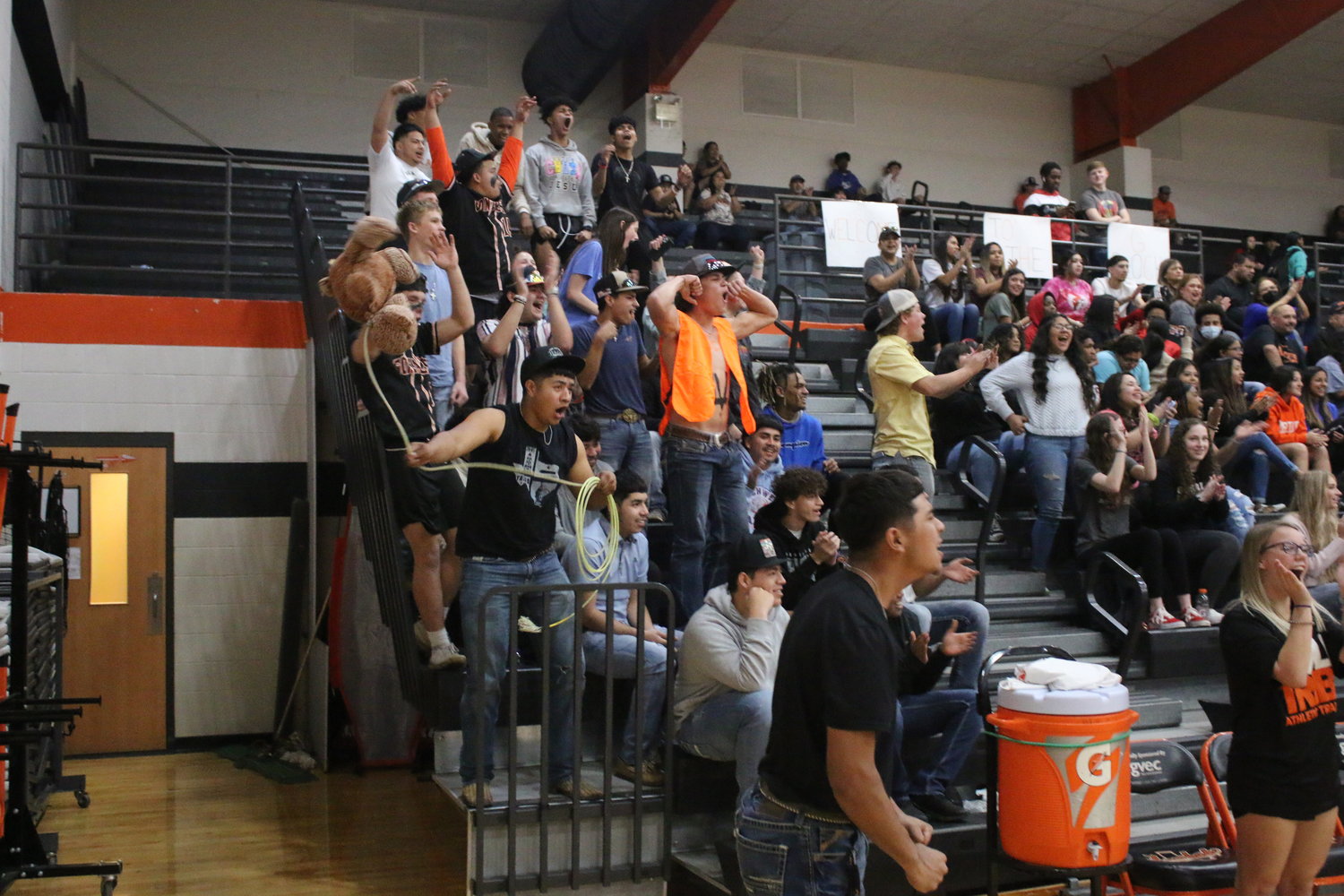 The historical battle of Hastings may have been fought more than 1,000 years ago, but Gonzales’ Jeremiah Hastings fought his own battle against La Vernia Tuesday, Feb. 1, and practically willed the Apaches to a 63-57 victory at home in a heated district contest.

The win moved Gonzales (15-6, 2-3) into sole possession of third place in five-team District 27-4A, while La Vernia is in second place, just a game up. The top four teams advance to the playoffs, so every remaining game for the Apaches is a battle to stay in the hunt for the postseason.

Gonzales came to play in the first period and was shooting the lights out as the Apaches hit four of their seven three-pointers in the first eight minutes of the game. Down 3-2, the Apaches went on a 7-0 run to take a 9-3 lead as Hastings, wearing the No. 12 jersey, muscled his way inside against his opposite number, the Bears’ Dillon DeLeon, who scored nine of his game-high 29 points in the frame. Hastings would score 12 in the opening period.

La Vernia closed to within 9-7 and Hastings completed a three-point play with a basket and an ensuing foul shot to make it 12-7. Minutes later, Angel Martinez hit a three-pointer and then Hastings did the same and the Apaches built up an 18-9 lead. The Bears would score four more points in the period, but not before Xavier Aguayo hit a long-range three from what would be college distance and the Apaches ended the period up 23-13.

In the second period, Gonzales scored the first three points to take their biggest lead in the game at 26-13, but La Vernia started to come back behind DeLeon, who scored 10 points of the Bears’ 14 points in the quarter. A 6-0 run made it 26-19, but Aguayo and Martinez each hit another three and Gonzales went on a 6-2 run to make it 32-21. La Vernia closed out the quarter with a 6-2 run of their own and Apaches were up 34-27 at the half.

The Bears started the third period clawing their way back to a three-point deficit at 40-37. The two teams would swap scores the rest of the frame and Gonzales would hold a 48-45 lead at the end of the third period, setting up a thrilling final stanza.

Early in the fourth, T.J. Riojas was called for a technical and flagrant foul when he swatted away a shot by the Bears’ Ryan Bellino. La Vernia hit three of four free throws (one technical and two for the foul) and the score was tied at 48-48 with the Bears inbounding the ball. The Apaches stopped La Vernia and then would retake the lead at 50-48 as Hastings started to take over once again, refusing to be denied en route to eight more of his team-high 24 points.

La Vernia would take its second and last lead of the game at 53-52, but that sparked an 11-0 run by Gonzales, kicked off with a Brady Barfield three-pointer which put the Apaches up for good at 55-53. Hastings also completed a three-point play. By the time the run ended, Gonzales was up 63-53 with under two minutes to play.

The Bears would get the final four points of the game and plenty of chances in the end as the refs called a number of fouls late on Gonzales, but La Vernia missed seven of 11 free throws in the fourth period and Gonzales held onto a 63-57 win.

In addition to Hastings’ 24, Martinez scored 15 points, while Barfield and Aguayo each had eight. Jacob Bakken scored four, while Alexander Escobedo and Riojas each had two.

Gonzales was originally going to play last-place Navarro on the road Friday, Feb. 4, but that game has been canceled and there has not yet been an announced makeup date. They host district leader Pleasanton on Tuesday, Feb. 8.