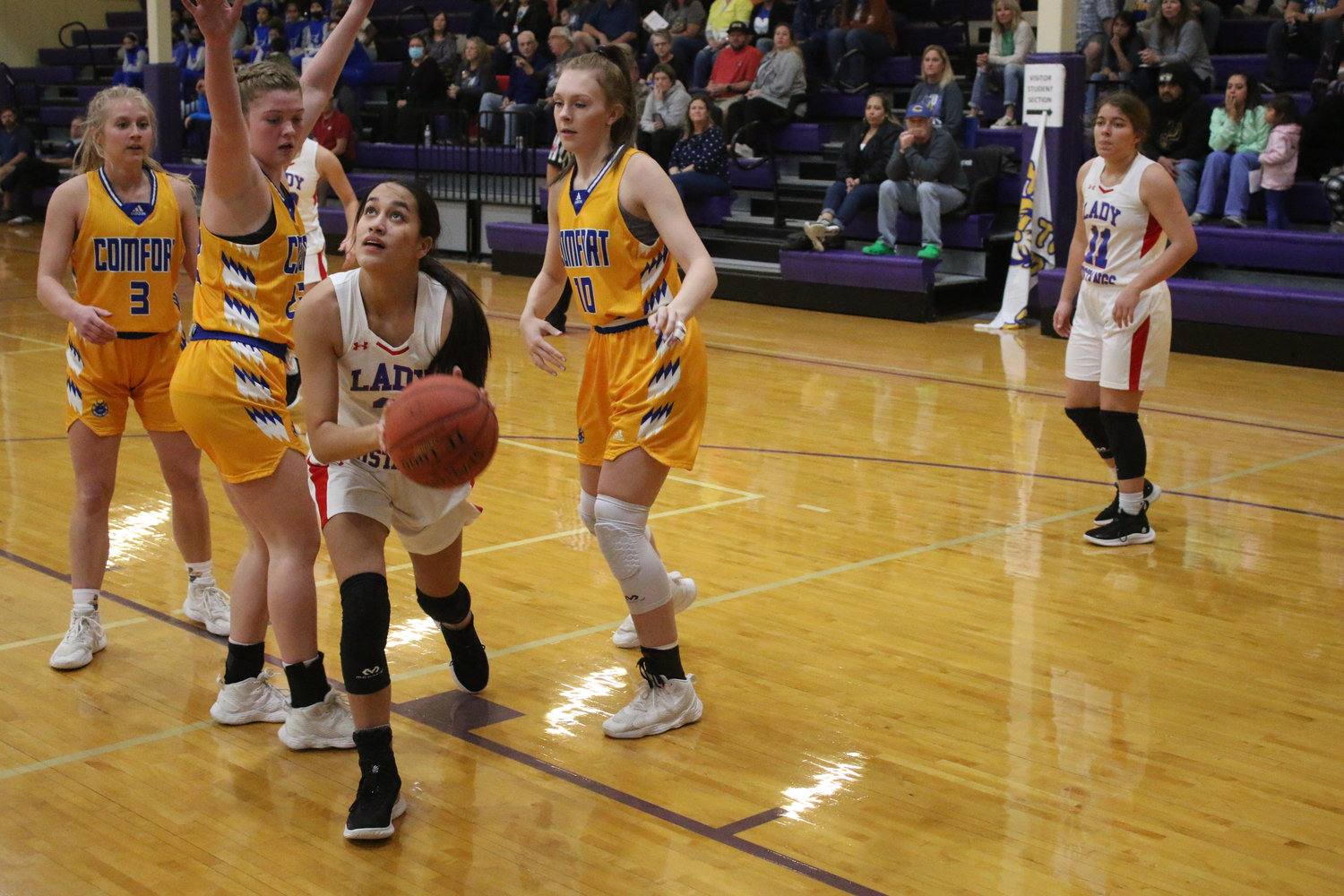 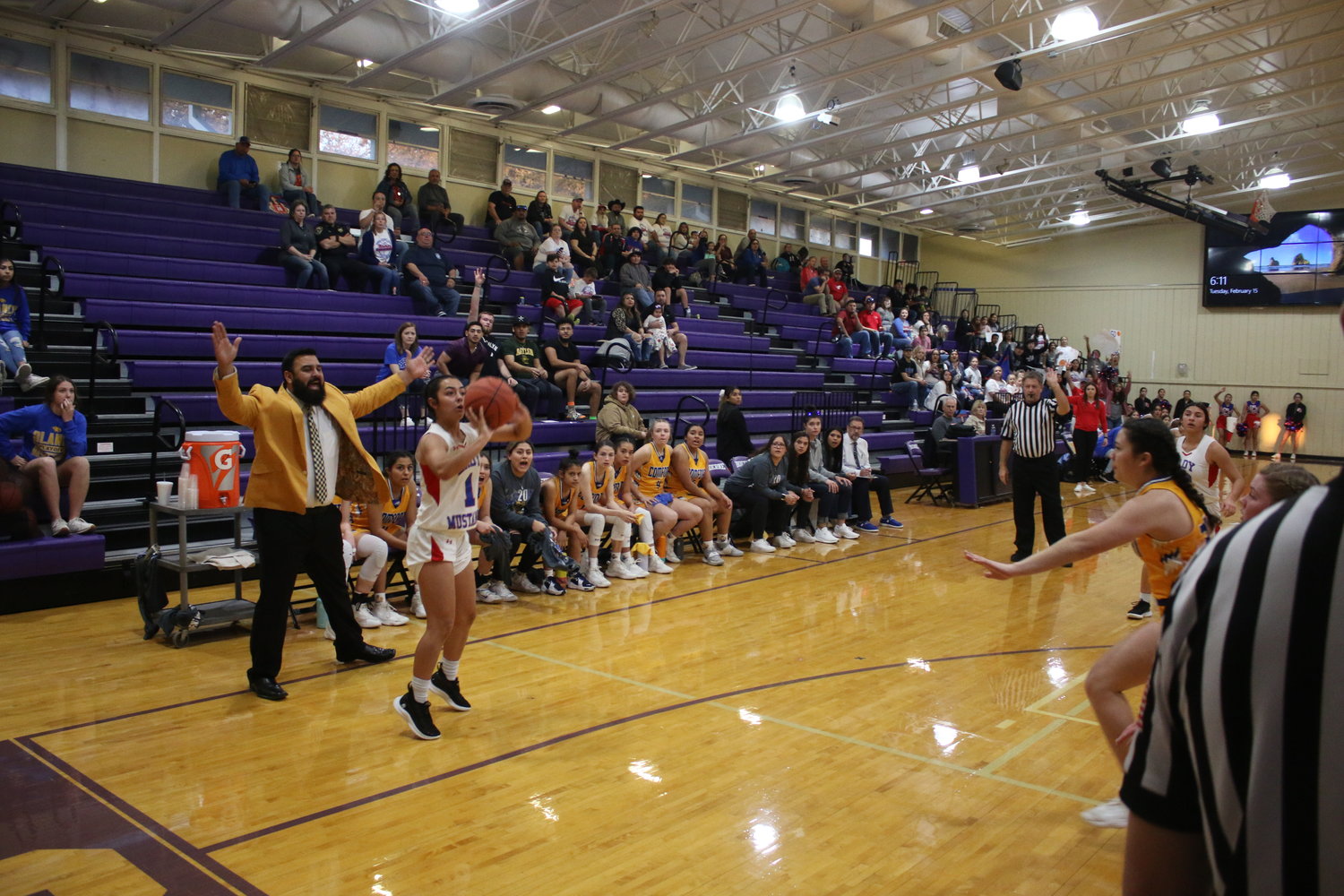 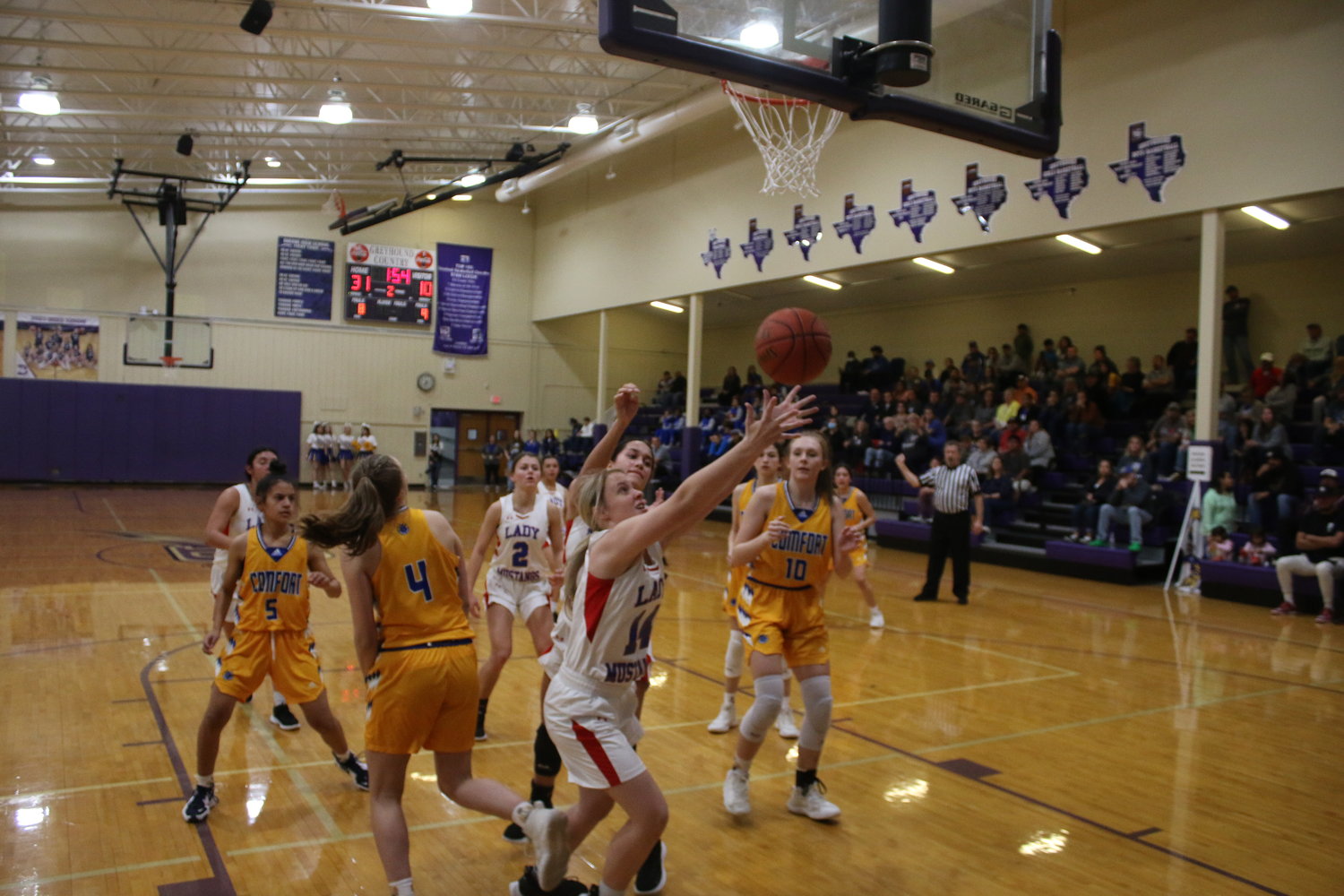 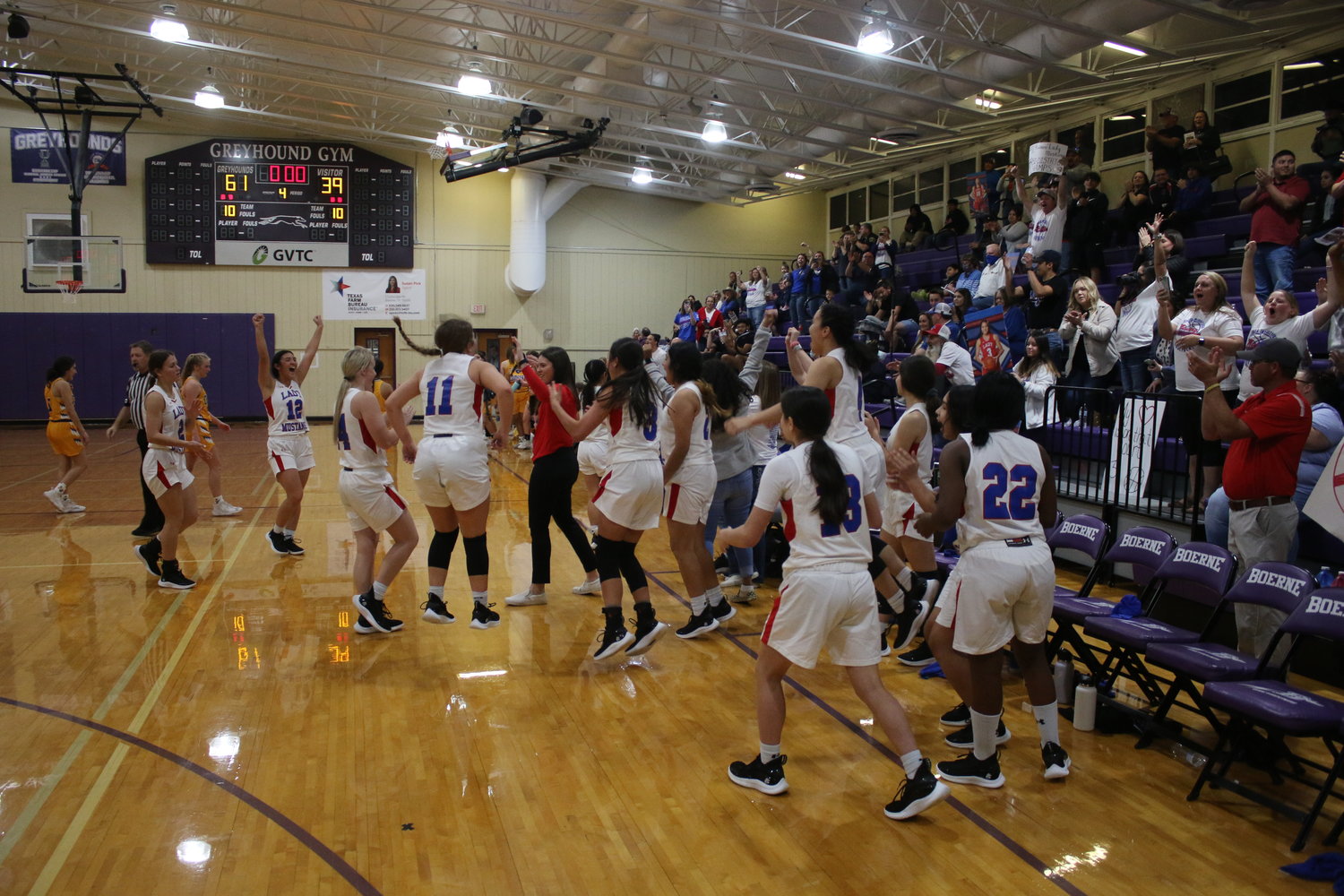 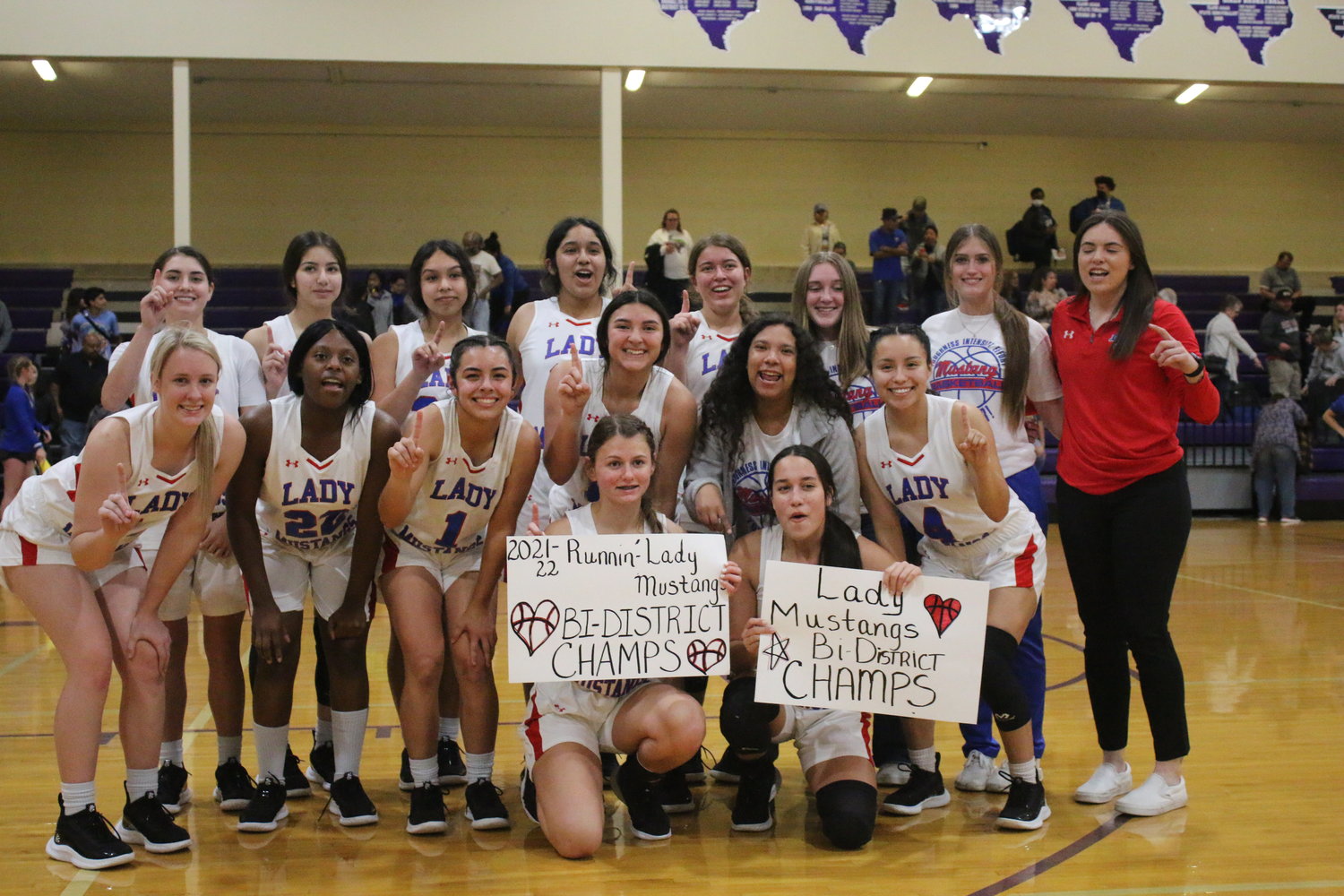 The Comfort Deer were ahead of the Nixon-Smiley Lady Mustangs, 6-2, early in a bi-district playoff game Tuesday, Feb. 15, at Boerne High School, forcing Nixon-Smiley Coach Jordan Estrada to call a timeout less than two minutes into the game to talk to her girls and calm their nerves.

To say the Lady Mustangs responded to their coach would be an understatement.

They didn’t just get mad; they lowered the boom on the Deer and didn’t stop until the final buzzer sounded, stampeding to a 61-39 win that now has them moving on to play District 28-3A champion Lytle in the next round.

That game is set for 6:30 p.m. Friday, Feb. 18, at the Seguin High School gym. There will be a community pep rally in the Nixon Post Office parking lot at 6 p.m. Thursday, Feb. 17, to support the bi-district champion Lady Mustangs.

After the aforementioned timeout, senior Abby Fox was fouled on a shot and hit one of her two ensuing free throws to make it 6-3. Just a minute later, junior Mady Velasquez hit a three-pointer to tie the game at 6-6. After a steal by Nixon-Smiley, Velasquez found herself wide open behind the arc in front of the Comfort Coach Gabe Garza. As Garza frantically gestured to his players to cover her, Velasquez calmly and confidently drained another trey to make it 9-6.

The Lady Mustangs would never trail again after that point. They would finish the period up 13-8 and then would continue to hold the Deer scoreless for a stretch of 3:39 in the second quarter as Nixon-Smiley peeled off 11 unanswered points to make it 24-8. After a Comfort basket, the Lady Mustangs would go on a 10-0 run for the final 2:41 of the half and went into the locker room up 34-10.

“Sometimes, we just need a minute,” Estrada said. “We just need to get our nerves out, get a shot to fall, and then we pick it up from there. They play so hard all the time. That's what keeps us in games and that's what gets us ahead in games like that where it's scrappy. If there's a 50-50 ball, we're gonna win it.

“We played this team in pre-district and it was a close game that we won by three. These girls, after the week we had last week, they were ready to play. They were ready to show everybody that we earned this spot and we deserve to be here.”

In the third period, the Lady Mustang defense continued to force Comfort into errors, and while the Deer managed to score 14 points in the period — more than their entire first-half output — Nixon-Smiley scored 18 as they increased their lead to 28 points at 52-24.

The fourth period saw Nixon-Smiley concentrating more on slowing down the game tempo and working the ball around as the only field goal they hit was a three-pointer by sophomore Kendall Amaya. The Lady Mustangs did hit 6-of-10 free throws in the period. Comfort outscored the Nixon-Smiley, 15-9, in the final period, but by that time, the Deer were already stewed.

The Lady Mustangs’ next opponent, the Lytle Lady Pirates, are 25-9 on the season and won 14 of 16 district games in a nine-team district that includes Poth, Karnes City and Cotulla. The Lady Pirates defeated El Maton Tidehaven, 74-53, Tuesday night. Their big scoring threat is Calyssa Sevier, who has averaged 20.2 points and 8.1 rebounds per game.