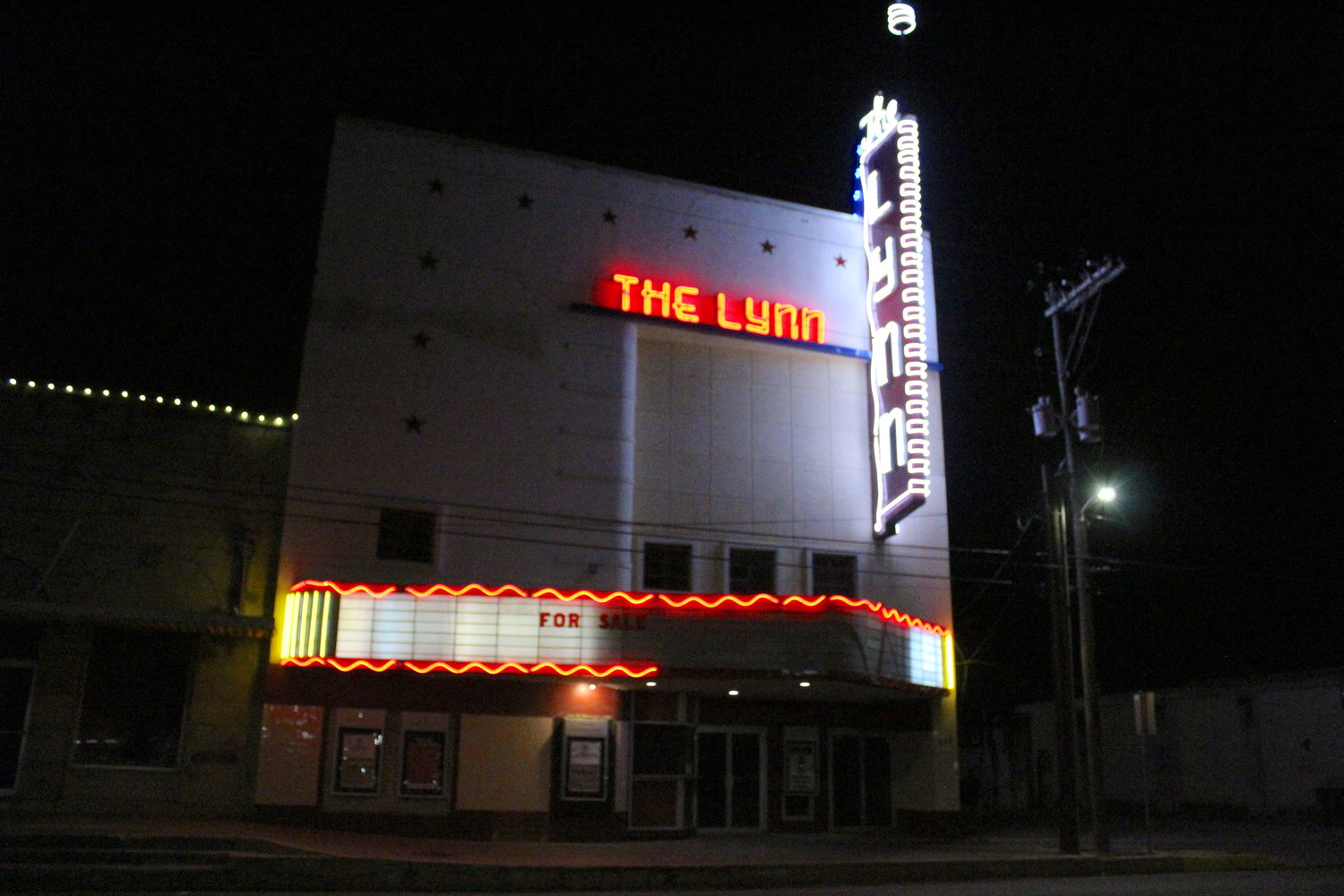 The Lynn Theatre was lit up Thursday, Jan. 19 for the one of the first times since its closure.
Vandy Van Epps 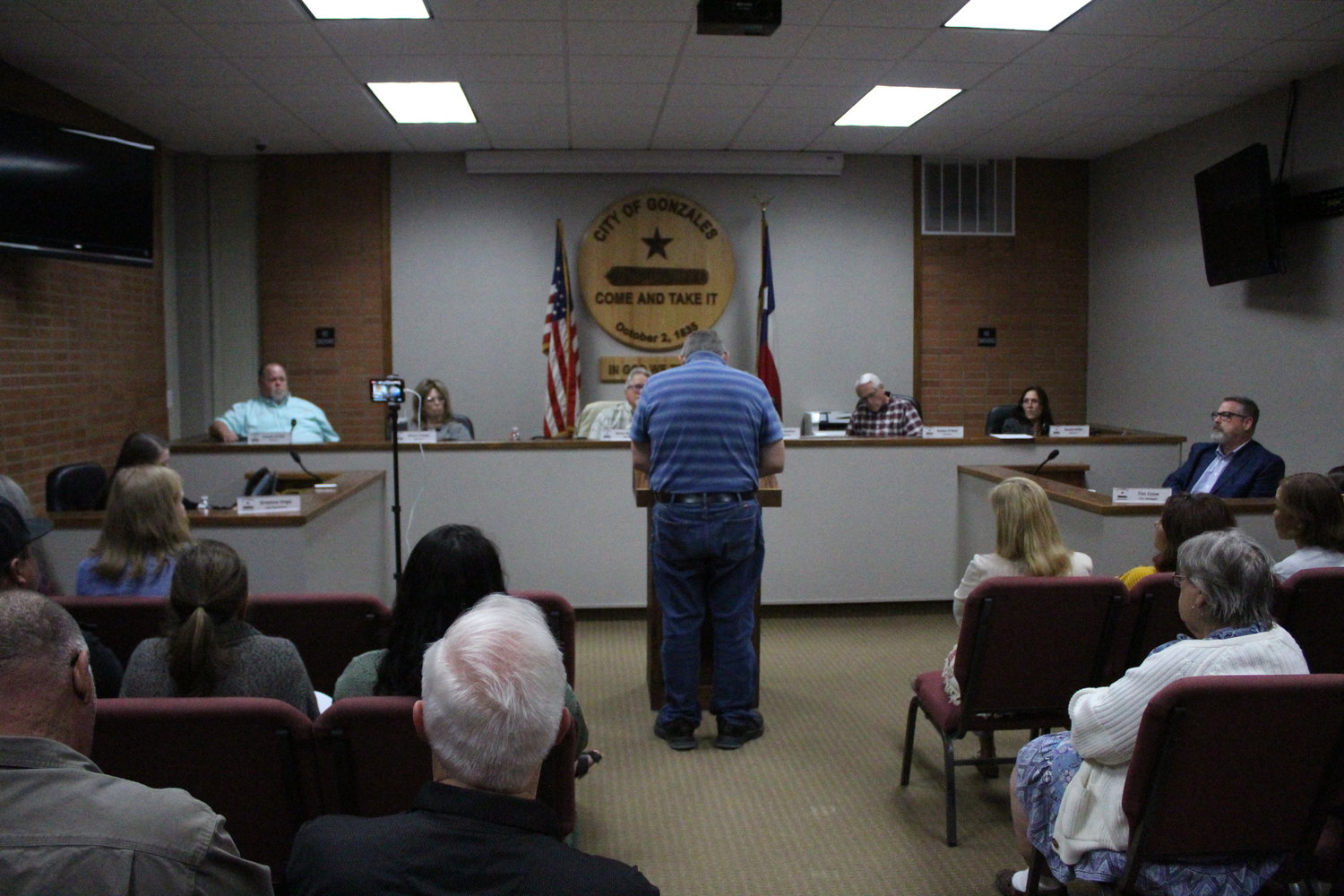 All eyes were on the Gonzales City Council in a packed meeting Thursday, Jan. 19 for the final decision in regards the ownership of the Lynn Theatre.

Members of the community expressed their concerns about how the GEDC voted in its Dec. 19, 2022 meeting to sell the historic movie theater to the partnership of Sydney Allen and Devon Warzecha from Smiley.

“Economic development, goals and actions are usually rooted in the goal of improving life for those living in our community … Recently, there were offers to buy the Lynn Theatre and proposals given to be considered by the GEDC before awarding bids,” said Cathey Crawley, a supporter of the bid by the Durham group, comprised of Doug and Dave Durham, Dennis Kaiser, and Susanna Sontani-Telford.

The Durham group and the Allen-Warzecha group were two of three bidders for the Lynn in the Dec. 19 meeting, at which Allen-Warzecha won the bid to purchase the theater.

Crawley stated two of the three parties bidding didn’t follow the protocol to be on the Dec. 19 meeting’s agenda and were given more than three minutes to speak on their proposals for the Lynn.

“When making their decision, it was shared that this bid was going to the highest bidder, clearly documenting that money was the most important, versus the real intent to have the theater up and going, which could be done by maybe one or more of the others who submitted a bid. This didn't seem fair to us. And we really would like for you to reconsider,” Crawley said.

Gonzales resident James Lawrence, also a supporter of the Durham proposal, said he supports the proposal by the Durhams that would make the Lynn a “first- and second-run movie theater.”

“It is the best option for the city and would best serve downtown, the restaurants and the merchants. It was best serving the citizens of Gonzales and its quality of life. It would best serve our tourist industry,” Lawrence said.

“There was a movement in Europe during the 1930s that was called a Bauhaus movement, which was young architectural students getting together to have a contemporary vision of modernism for the European scene,” Kaiser said.

Kaiser added the Bauhaus movement went national, but today, not many of these buildings still stand.

“This building represents, in its truest form, not only consisting of brick but limestone surrounding stainless steel, and also contemporary implements that had been resourced and also retained as an architectural implement for the South Texas region.” Kaiser said.

Kaiser has seen many of these historic buildings get demolished in the state of Texas, but also in the international movement.

“They remove the seats, they chisel out the slope form on the interior, they make sure that the building becomes just a shell of architecture, which is not implemented for the future generations of this American scene or the Texas scene,” Kaiser said.

“There are so many implements that could be ripped out to where we don't have a future for this building. I implore you to please consider the future of the Lynn theatre for future generations,” Kaiser said.

Allen and Warzecha spoke after the council returned from closed session to talk about their plans for the Lynn.

Allen has major in history, and she understands the history of the Lynn in the city of Gonzales.

“I want to take the Lynn and I would like to make it a destination for this town, not just for us. I want people coming through to want to stop there and go in for any reason that we have going on, even if it's just a look at the history that is there,” Allen said.

Allen wanted to clarify to the council and the audience that their main primary use of the Lynn would be for first-run and second-run movies, but she added she wants to open up for other entertainment opportunities.

Allen pointed out that there is stage behind the screens and she wants to use that as an opportunity to show off the Lynn’s history.

“When we have a comedian come in, I think that will generate a bunch of people and I can get them to come in. I would like them to be able to do their comedy show in the Lynn, roll up the bottom screen, have them stand on that stage and run their show,” Allen said.

Councilwoman Ronda Miller asked Allen and Warzecha what their intentions for the Lynn Theatre were — whether it was “going to be a movie theater or not.”

Warzecha said they want to look into the technology that it is inside the theater before deciding what kind of movies are shown.

Allen clarified to Miller that they are definitely planning to show first-run movies and secondary movies.

GEDC executive director Jennifer Kolb wanted to clarify to the council that this sale of the Lynn is taking into account that the theater would be restricted as an entertainment venue and “the marquee will be preserved.”

“We would like to work with the buyer to have a designated deadline or an option to repurchase should they not be able to perform,” Kolbe said.

The council failed to make a motion to table to sale the Lynn after receiving confirmation from the winning buyers that it would not be open for another two years; Miller and Councilman Joseph Kridler voted to table the sale, while Councilwoman Sherri Koepp and Councilman Bobby O’Neal voted against waiting, with Mayor Steve Sucher giving a tiebreaking vote not to delay the sale.

The council then voted again with Koepp making the motion to approve selling the Lynn to Allen and Warzecka. Koepp and O’Neal voted to approved the sale, while Miller and Kridler voted against the sale. Once again, Sucher was the tiebreaker and voted for the approval of the sale.

Several council members gave words of encouragement for Allen and Warzecha after the final vote was cast.

“You can't create a ripple without the pebble, so you're the pebble,” Koepp said.

O’Neal told Allen and Warzecha to proceed with opening the Lynn Theatre “as soon as possible.”

Miller agreed with O’Neal about that statement, saying the citizens of Gonzales “need something quicker.”

“I just want to say thanks to the Allen and Warzecha family and good job. Keep going. Thank you.” Sucher added.