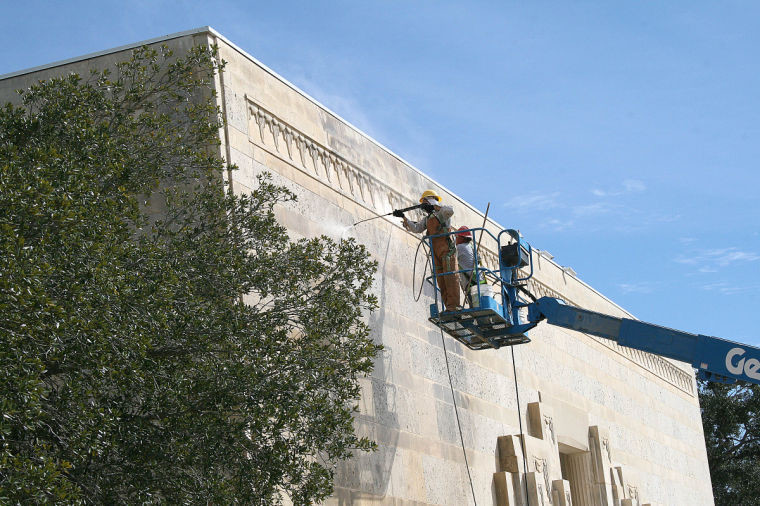 Workers remove discoloration that has tarnished the exterior of the Memorial Museum for decades. The process will take about a month, city officials said.

GONZALES — Work crews already have made visible progress on the exterior cleaning of the Memorial Museum. City Manager Allen Barnes said Wednesday it will take approximately a month for the entire cleaning project.

The building’s exterior will continue to lighten as surface is exposed to sunlight, contractors said.

Work will commence on the repaving of Church Street from St. Andrew to the bypass on Feb. 5, Barnes added.

“Portions of the street will be processed by the piece of equipment we bought last summer, the asphalt zipper,” Barnes said. “They will mill parts of the street that need it and will stabilize them with cement mixed with the millings.  Our paving contractor, Lone Star Paving, will then come in and lay an asphalt overlay and will then paint the lane markings in the street.”

After the preconstruction meeting, Barnes said he will have more information about how long the repaving work will take.

When Church Street is complete, crews will move to St. Paul Street. Once these two streets are finished, roadwork will be put on hold until summer.

City officials added that the fountain in front of city hall have been replaced with energy-saving LED lights.

Barnes said the 1960s-era lighting has not functioned in decades.

Replacing the fountain lights was just one of the projects under way to improve the appearance of the City Hall building.

“We have done some minor redesign of our conference room and the City Council Chambers,” Barnes said. “In the coming weeks we will be replacing the old worn out ceiling and will be replacing some of the paneling that is beyond repair or reconditioning with sheetrock and texture.

Crews also removed the L portion of the counter in the lobby and will redesign the bill paying area.

“We want the City Hall to be what the Citizens of Gonzales expect it to be, an attractive public space,” Barnes said.  “We have done some landscaping by placing Texas Sage and Bluebonnets in the front flower beds and other native species in the reconditioned beds by the drive up window.  I believe we have an obligation to those we work for the keep their building maintained in an attractive way.  Over the next few months we will clean the tile in front lobby, clear the clutter from public spaces and will paint and clean all of the areas of City Hall.  We have a beautiful building and we want to get it back that way and keep it that way.”