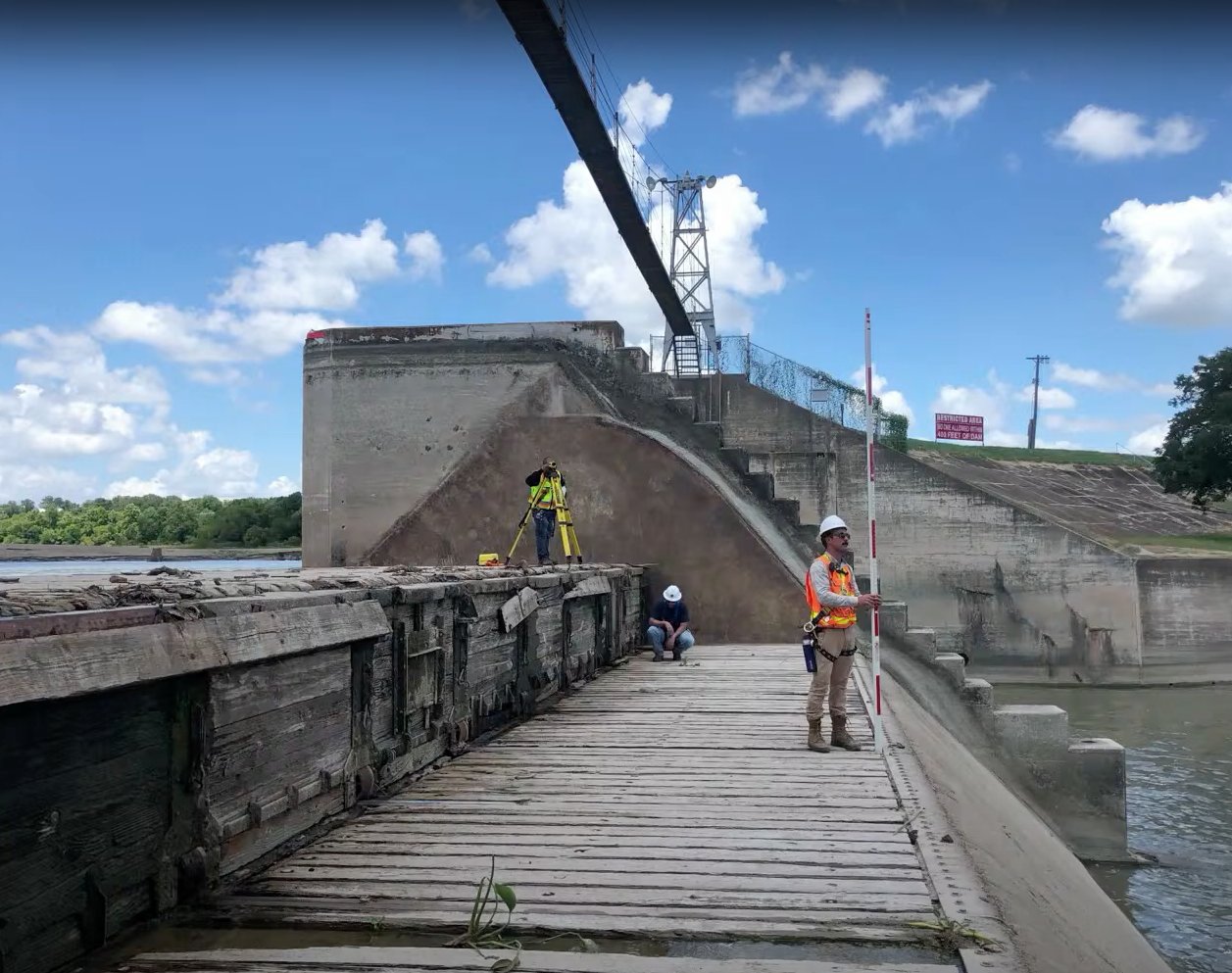 Guadalupe-Blanco River Authority staff and engineers inspect the damage done to Gate No. 2 at the Lake Gonzales spillgate after a tree caused damage during the nighttime hours of Aug. 3. The inspection revealed there are no mechanisms available to repair the spillgate and GBRA is determining how to find funding for a replacement.
Courtesy photo/GBRA
Posted Thursday, September 2, 2021 8:21 am

The GBRA operations staff have been out there to evaluate the gates and we’re really unable to identify any repair mechanisms that can be accomplished in a safe manner that we felt were implementable at this time.”
GBRA Executive Manager of Engineering Charlie Hickman
Special to The Inquirer

An evaluation and inspection of the failed Lake Gonzales hydroelectric spillgate by the Guadalupe-Blanco River Authority and third-party engineering consultants has determined the gate is unrepairable, the GBRA board learned during an Aug. 18 briefing.

GBRA’s Executive Manager of Engineering Charlie Hickman said there are no repair mechanisms available that can be safely accomplished to bring the gate, which failed Aug. 3, back into operation.

“The GBRA operations staff have been out there to evaluate the gates and we’re really unable to identify any repair mechanisms that can be accomplished in a safe manner that we felt were implementable at this time,” Hickman said.

“The recommendation we have still for Lake Gonzales is that we leave the gate in its current condition and pursue as we have done with the other hydroelectric lakes, a funding solution that will allow for a comprehensive repair of the spillgate and not attempt to address the 90-year-old spillgate that is currently installed.”

Without the ability to repair the failed spillgate, funding will need to be identified for the replacement of the spillgates in order to restore the lake. An exhaustive search for potential funding has not returned any viable options to date.

Video captured prior to the failure shows a large tree in the waterway that appears to become lodged on the spillgate when passing flows shortly after midnight on August 3. When operators attempt to raise the gate back up nearly five hours later, the gate fails to respond and continues to rapidly drop. The weight of the tree on top of the spillgate and the resulting increase in water pressure inside the gate is thought to have contributed to the observed issues on the failed spillgate.

All activities that require individuals to be inside or on top of the raised spillgates were halted in the interest of safety following the catastrophic failure at Lake Dunlap in 2019. A third-party assessment of the Lake Dunlap spillgate failure determined that the spillgates at all of the hydroelectric dams were compromised due to the significant deterioration of their structural steel components, deeming them unfit for most maintenance and repair activities. While there are no comprehensive repairs short of replacement to sufficiently address the condition of the more than 90-year old spillgates, any of the minimum repairs that could be attempted for the failed spillgate at Lake Gonzales would require the gate to be raised to allow adequate access, and would necessitate operators to be inside or on top of the raised gate.

Lake Gonzales, along with Meadow Lake and Lake Wood, do not have the tax base and development to support the creation of a Water Control and Improvement District (WCID) - which has served as a solution to funding the necessary replacement of the aging infrastructure for three other Guadalupe Valley Lakes. Further, the Guadalupe Valley Lakes do not serve a purpose in flood control, because they have no room for temporary storage of flood waters, so they do not qualify for any existing state or federal flood relief programs.

Built in the 1930s, the spillgates on the dams that form the Guadalupe Valley Lakes have surpassed their useful life, as evidenced by spillgate failures at Lake Wood in 2016 and Lake Dunlap in 2019. With the hydroelectric dams having operated at an unsustainable deficit for more than a decade, GBRA cannot support the necessary replacement of the spillgates in the absence of state and federal funding assistance and stakeholder partnerships. GBRA has supported efforts made by the lake associations at Lake Dunlap, Lake McQueeney and Lake Placid to create WCIDs to fund the necessary replacement of the spillgates, as well as the annual maintenance and operation.

More information, including the latest updates on the Guadalupe Valley Lakes, is available at GVLakes.com.