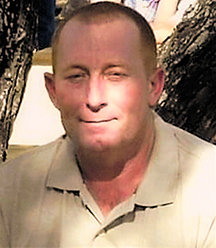 Kevin enjoyed growing up in Kenedy, Texas. He graduated from Kenedy High School with the Class of 1984. While in school he enjoyed playing football and baseball and he was a member of the FFA and 4-H Club.

After high school he attended Technical School in Arizona before moving to Karnes City to work for WT Fiberglass and later Xerxes Fiberglass in Seguin. Kevin changed careers and went to work for Sonny’s Oil Field Supply before joining his father’s company, Perry’s Pumping Service.

Kevin enjoyed fishing the rivers, lakes and coasts of Texas and he enjoyed “hotrods” and tinkering with anything and everything.

He adored his family and cherished spending time with them. He had a delightful sense of humor and loved to joke around. He was strong physically and spiritually and cared deeply for the needs of others.

Graveside services will be held at 11 a.m. Tuesday, June 1, 2021 in Gonzales Memorial Park Cemetery with Rev. Rick Bagwell officiating. Memorials may be made to the charity of one’s choice. Friends may leave their condolences to the family by visiting www.seydlerhillfuneralhome.com. Arrangements are under the care and direction of Seydler-Hill Funeral Home.