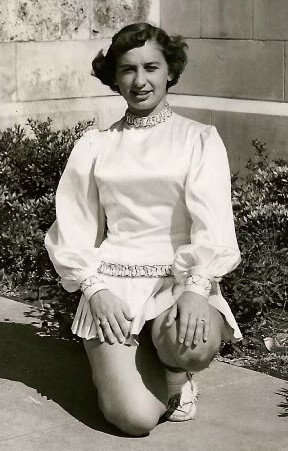 Laura Lee Lloyd Wilson, beloved mother, grandmother, sister, and friend, went to heaven on Wednesday, April 14, 2021 at the age of 86.

She was born on Nov. 7, 1934 to Charlie and Anna (Sestak) Lloyd. She graduated from Gonzales High School in 1953; where she was a cheerleader and class favorite. Laura was blessed with her only child, Jane Ann, and later a grandson, Kolby Kifer.

She was a member of the Gonzales Ladies Golf Association where she served as President for two years. Laura was a founding member of the Monday-Thursday Bridge Club, pioneering bridge playing in Gonzales.

In her early years, she liked to deer hunt, fish, golf and ski; but bridge was her true passion.

Later, she went to work at Ladies First where she went to apparel market with Mona Bivins for many years. Later, she helped open and managed Shear Designs Boutique where she loved visiting with and helping customers. Her funniest and favorite memories were of the many road trips with her four sisters traveling from state to state.

The family wishes to send a thank you to the staff at the Texan Rehabilitation Nursing Facility and a special thank you to Deidra Kuntschik and Lois Wilson for their love and kindness.

Family and friends are invited to attend a visitation at 5 p.m followed by a Rosary at 6 p.m. on Sunday, April 18 at Buffington Funeral Home in Gonzales. Funeral Mass will be Monday, April 19 at 10:00 a.m. at St. James Catholic Church followed by burial at St. James Catholic Cemetery. Pallbearers will be David Bivins, Kolby Kifer, James Lloyd, Jimmy Lloyd, Jeffrey Lloyd, Kelly Geaslin and Kevin Geaslin.

Memorials may be made to the St. James Catholic Daughters.