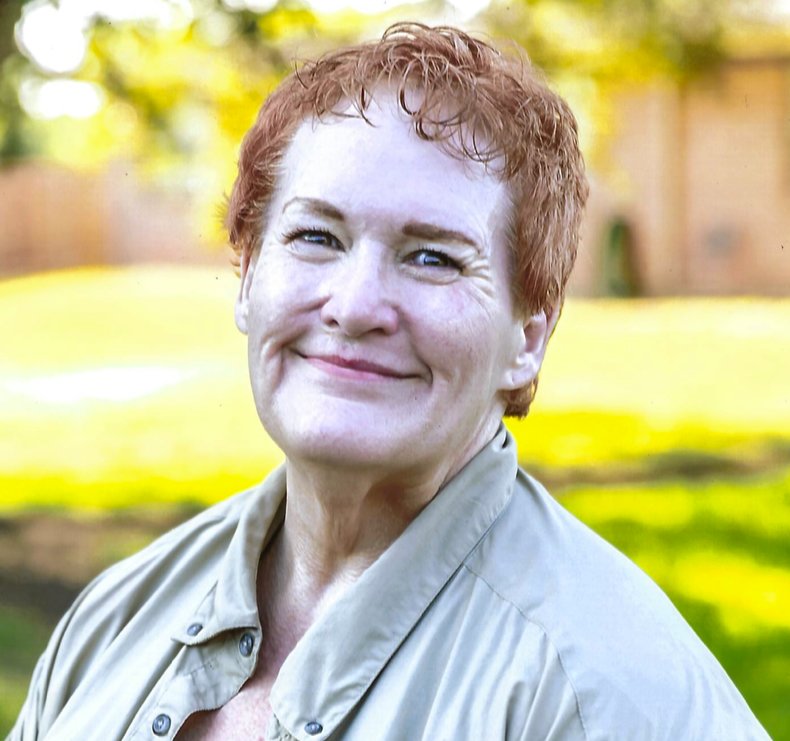 Melanie Kathleen Wright went to join the Church Triumphant Tuesday November 9, 2021. Melanie was born and raised in Gonzales October 16,1961 and graduated from Gonzales High School in 1980. Following her love for music, she pursued a degree in music at Texas Lutheran University. After two years, she discovered her true calling in nursing. Working as a word clerk at the old Warm Springs, she went to LVN school at Victoria College studying under Sister Renalda who demanded nothing but the best from her students. Wanting to pursue a career in Nursing Management, she later graduated with her RN from New York State Regents College in 1994.

Growing up, Melanie loved riding horses with her sister Megan and their friends through town or adventuring to their grandparents house. She and Megan would dress up their Shetland pony Coco with feathers in her hair and say she could then obviously dance like the ponies at the circus. Her horse Lancer, while he would let the cat ride on his back, one day he kicked Melanie and so she kicked him right back and he never kicked her again. Always having a love of animals, her family always joked that her house was the “Home for Wayward Animals” as she would take in cats and even a dog or two along the way. She was a faithful supporter of the Luling Animal Welfare Society (LAWS) and would always encourage any animal lover to consider adopting or supporting them any chance she got.

Her love of music was extremely diverse. She grew up singing in the church choir at the Presbyterian Church of Gonzales and would sometimes play the piano or organ and even direct the choir when called upon. She played in the band all through school, took piano lessons, and loved doing Saxophone duets with her father while her mother accompanied them on the piano. Her favorite genres were everything from Classical, to 80’s rock, Big Bands, and all things in between. She couldn’t believe her daughter grew up loving country music. One of the highlights of her life was going to Austria during her time at TLU and visiting Behtoven’s home and standing at the spot where he realized he was deaf. He could see the bells ringing but could no longer hear them.

No one can say Melanie did not love to work. Her first job she truly credits was working for Miller, Miller & Robinson Law in Gonzales. She later lived in Florida where she worked for the Sarasota Police Department before moving back to Texas to be closer to family again. After her time at Warm Springs, she went to work in the Nursing Home Industry as an LVN and later an RN allowing her the opportunity to serve as the Director of Nurses at several facilities in the Central Texas area. While she loved management, the highlight of her career was all the staff members she had the opportunity to help grow their education and love of the job. She mentored many of her friends in the industry and would study along side them. Having also taught at Victoria College for several years, presented her the opportunity to sit on the board for VC fostering in a new class of healthcare workers. Nothing was more important to her than her residents, their families and the staff she worked with.

Melanie’s faith was strong as she served as an Elder in the Presbyterian church, was a Sunday school and Vacation Bible School Teacher for countless years, and led many youth group trips over the years. Her later adult years, Melanie attended First Presbyterian Church in Seguin where she sang in the choir, attended Women’s Bible study and grew friendships that were unbreakable. Her family is comforted in knowing that she is at peace in Heaven.

Melanie’s charity work was a prevalent light in her life. She loved donating to kids fundraisers at school and helping local bake sales (baking cookies and brownies was her sole cooking talent). She was a member of the Gonzales Pilot Club for over 15 years and served in many officer roles including Club President in 2003-2004. Even before her own fight with cancer, Relay for Life had a special place in her heart. She served on the local planning committee for countless years and would later go on to walk as a survivor. She also found a passion for walking 5K’s both in person and virtual to support various charities even if they took her over an hour, she never gave up or stopped.

Melanie loved her family fiercely and would do anything for anyone she could. She is preceded in death by her grandparents Thomas and Hazel Wright of Gonzales, Louise Gillis of San Antonio, her father Tommy Wright, and her brother Roy Mike Wright of Gonzales.

She is survived by her daughter Lorrell Wright, mother Sheila Wright and Sister Megan Wright Perkins all of Gonzales, her niece Jennifer Wright (husband Victor Luna-Gutierrez) of Austin, nephew Larry Perkins of Gonzales and great-nephews Thomas, Raylan, Brayden, and Brantley. She is also survived by many aunts, uncles, cousins and friends who loved her dearly.

The family would like to extend their sincerest thanks to Dr. Antonio Santiallan-Gomez and his team at Texas Oncology, Dr. John Thomas and the team at Sievers Medical Clinic, Gonzales Memorial Home Health, Texas Nursing and Rehab, and Heart to Heart Hospice for their care and support of Melanie and the family through this journey.

Visitation will be held at the Gonzales Presbyterian Church Sunday November 21, 2021 at 2PM in the fellowship hall. A memorial service and reception will follow at 3PM.

Donations may be made in her memory to the Texan Nursing and Rehab Resident Activity fund or the Hazel Wright Memorial Fund through the Pilot Club of Gonzales.