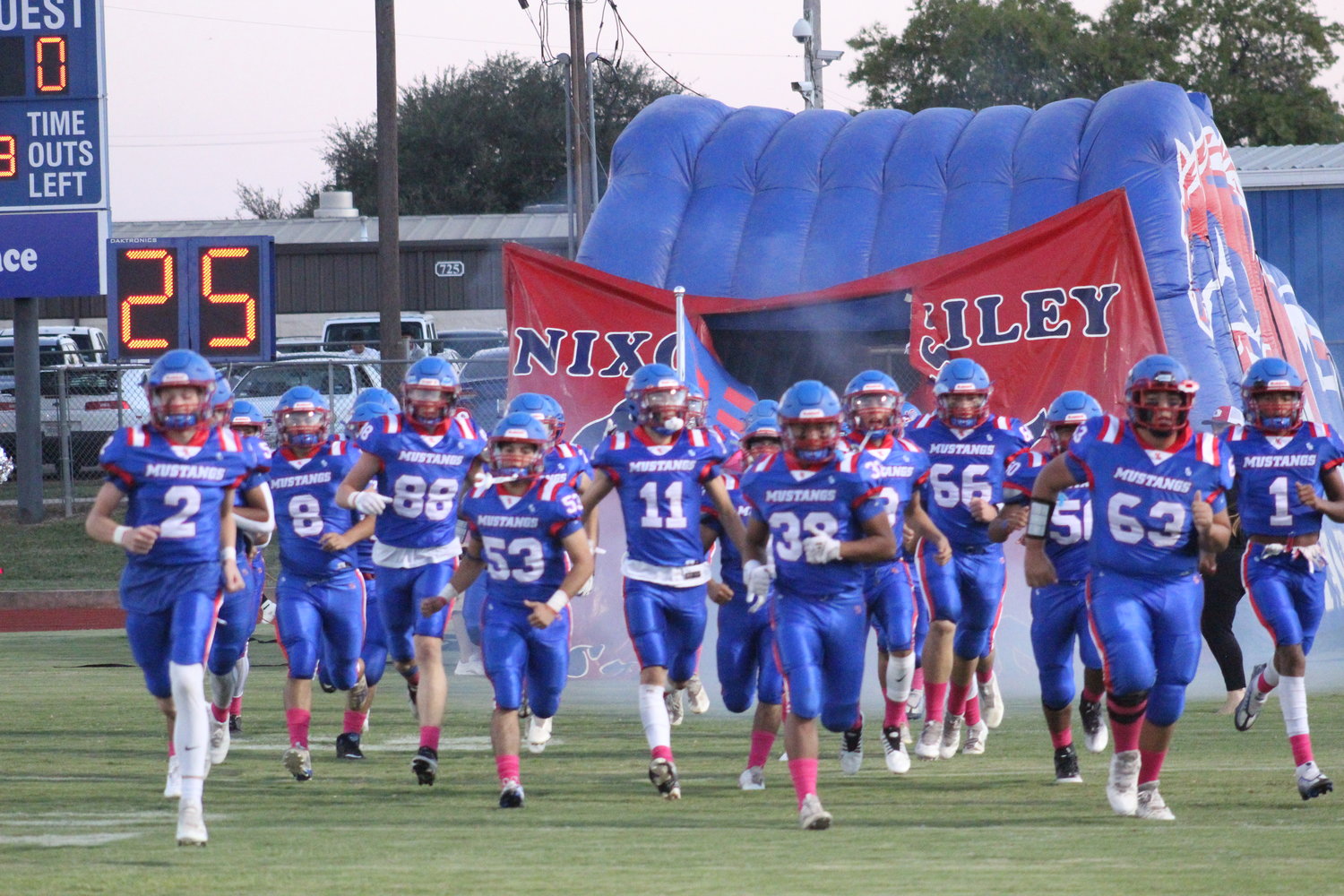 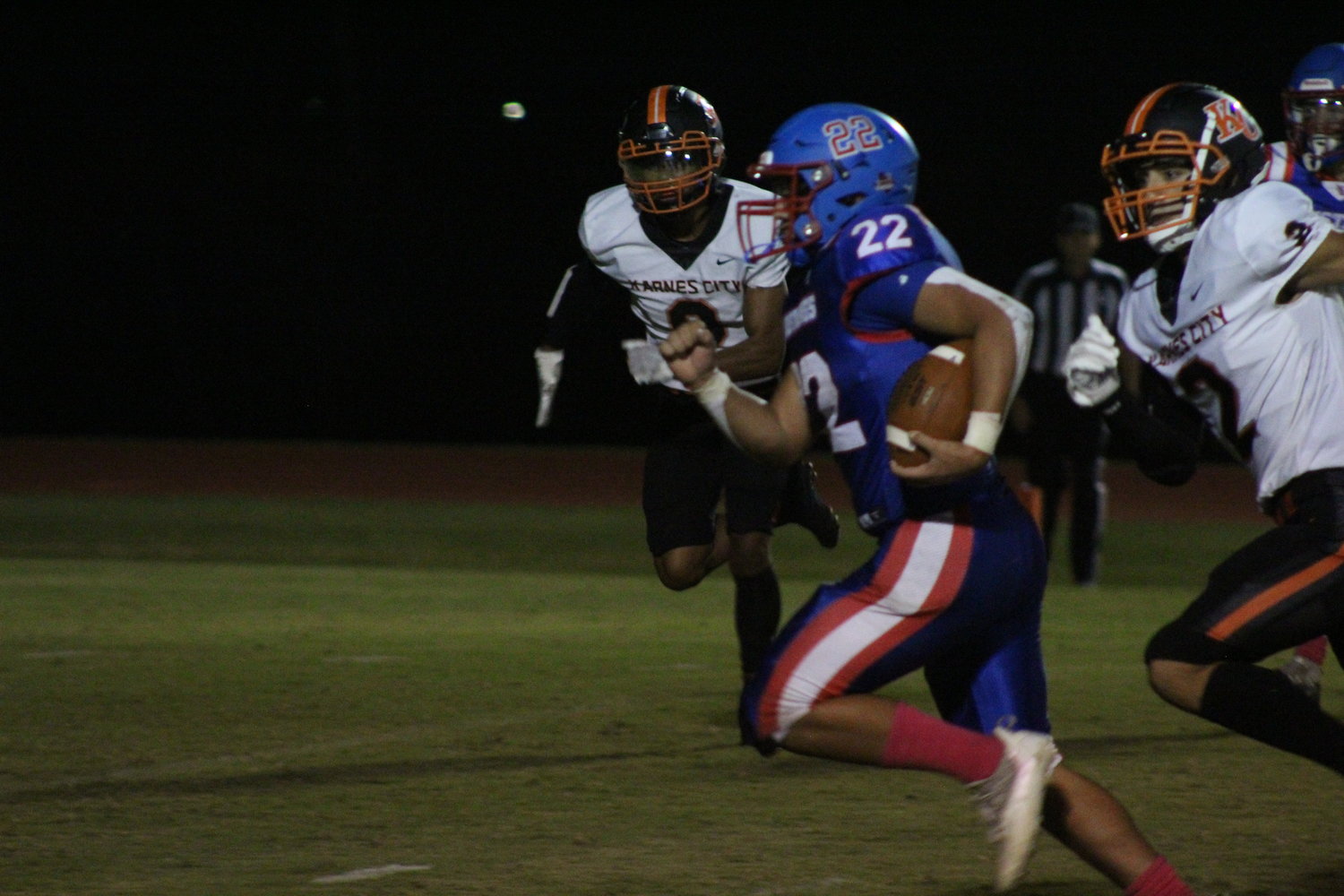 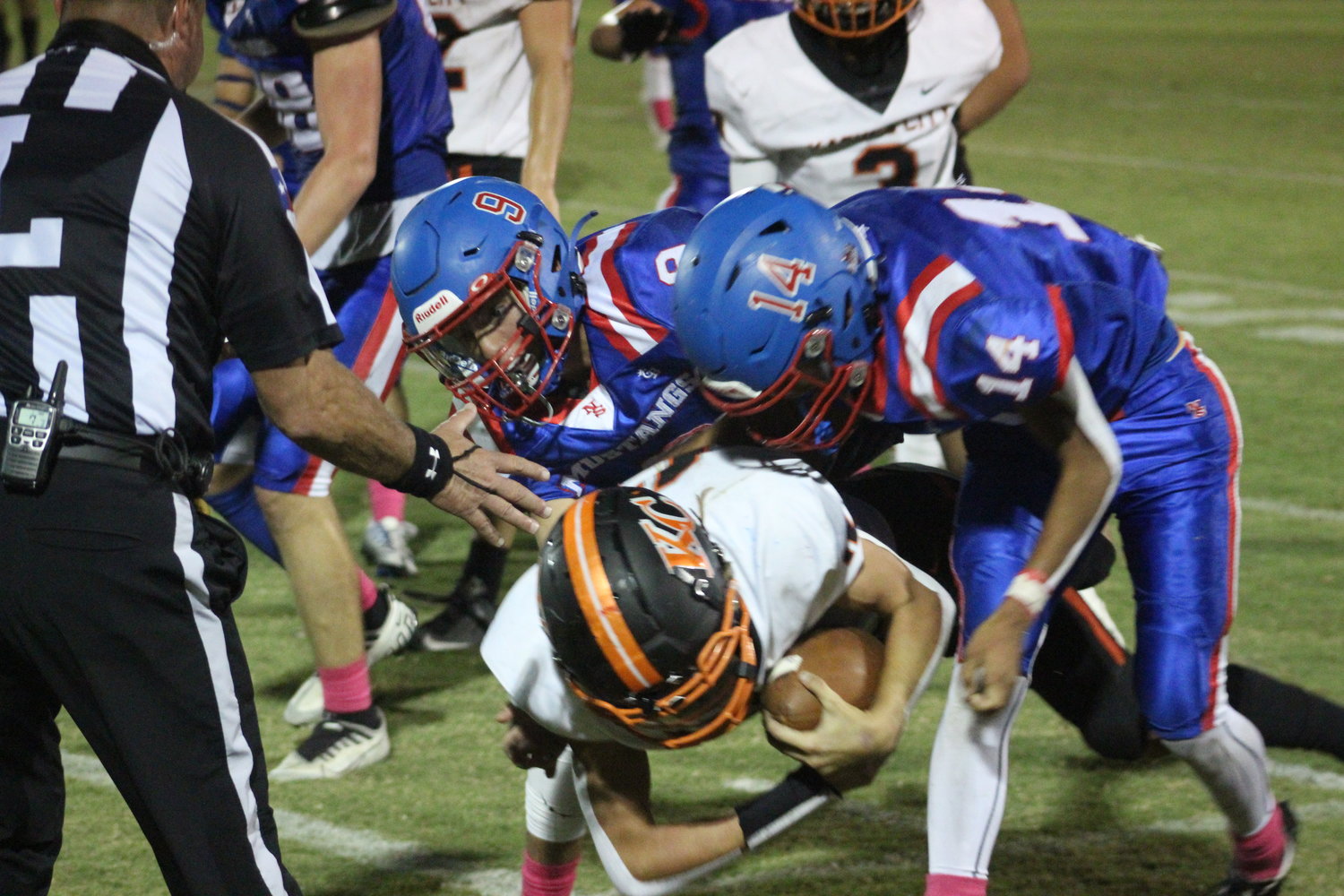 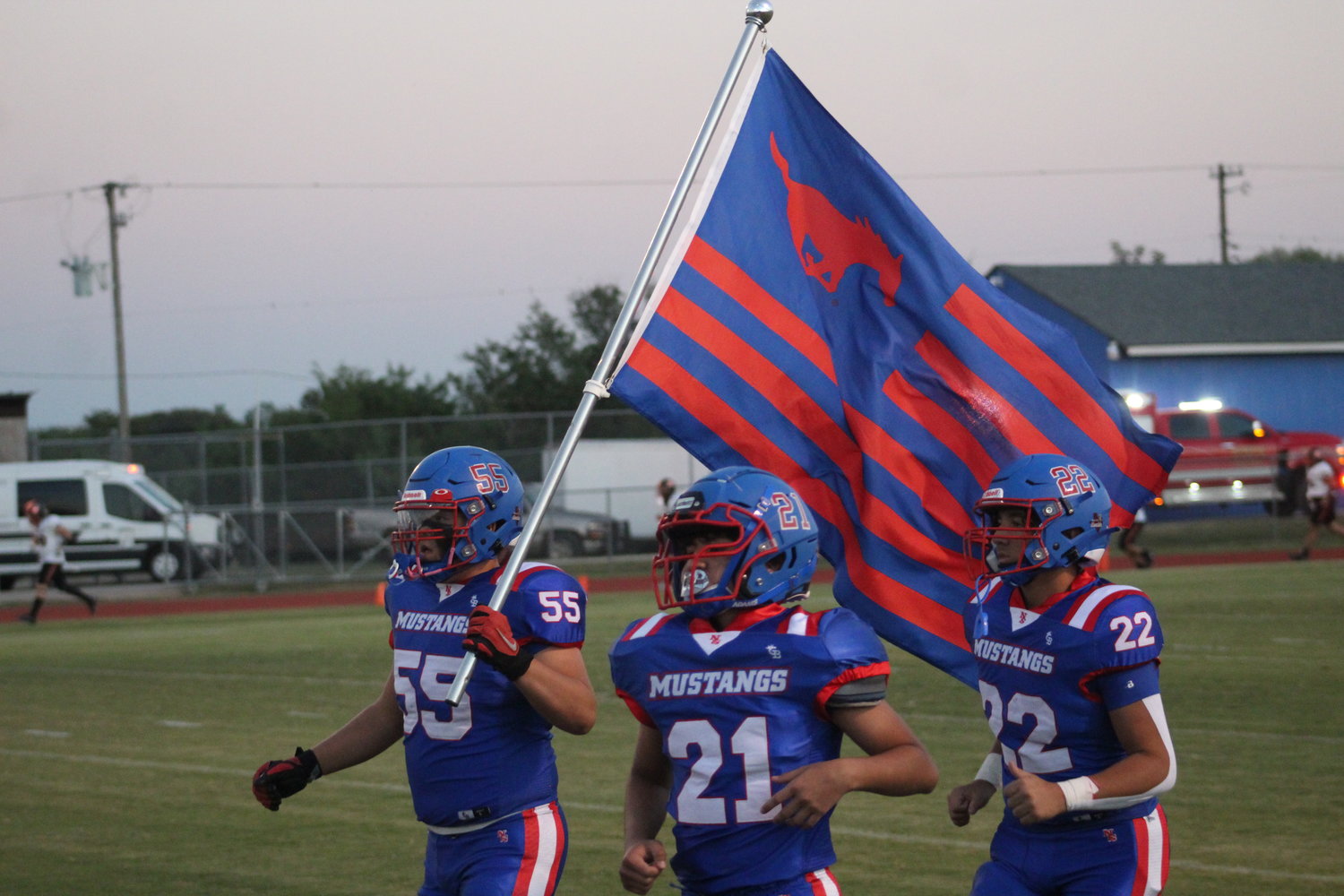 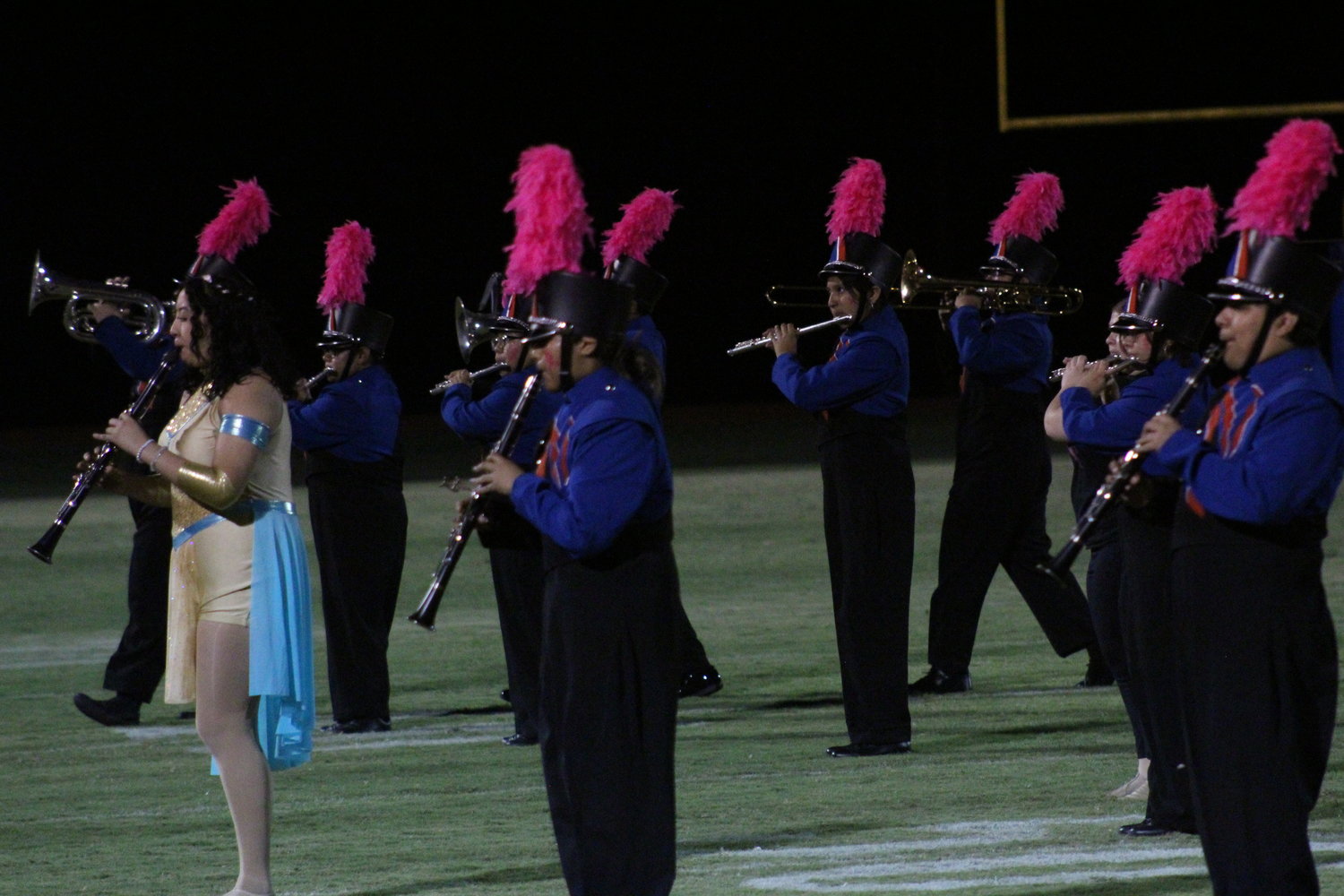 The Nixon-Smiley Mustangs grabbed a huge 20-13 win over the Karnes City Badgers Friday, Sept. 30 at their home game.

The Mustangs defense had a strong performance against Karnes City forcing an interception, three punts, two turnovers on downs and zero second half scores in their win last Friday. Head football coach Troy Moses is very proud of how his defense stepped in during the second half and sealed the win with a turnover on downs in the final second.

“Our kids worked hard. We asked them to fight and play and scratch every play like it is your last. And our kids came through and we made a great play there at the end to stop them on fourth down.” Moses said.

Mustang junior defensive back, Kade Dixon contributed to the defense with an interception from Badger’s quarterback Trey Clark in the second quarter.

The Mustang offense took control of the possession, taking time away from Karnes City with the rushing attack from running backs Juliana Amaya, George Rodriguez and Bradyn Martinez, who all three combined for 40 carries for 210 yards and two touchdowns (Amaya and Rodriguez). Moses said they are a ball control offense, meaning the controlling the time instead of relying on big plays. Moses talked about the penalties on the offense which it’s hard for his team to convert on downs if those penalties happen.

“Our style of play if we get a penalty, it's tough for us to convert those first downs. But if we don't get penalties, we don't make mistakes. there's not a lot you can do to stop us.” Moses said.

Amaya led the team with 19 carries for 102 yards and one rushing touchdown as a freshman running back. Amaya gave a lot of credit to his offensive line and said they did their job in the win over Karnes City. The Nixon-Smiley Mustangs are 2-0 in district for the first time since 2014, and Moses said their team is exactly where they need to be in district.

The Mustangs will travel to Dilley to take on the Wolves for their third district game, and Moses hopes the excitement from the players following this win gets them motivated heading into practice and into the next game.

Luke Moses: four completions of seven attempts for 75 yards and one touchdown

Julian Amaya: 19 carries for 102 yards and one touchdown

George Rodriguez: 9 carries for 55 yards and one touchdown

B. Martinez: two receptions for 50 yards and one touchdown

G. Rodriguez: one reception for 14 yards

Carl White: one reception for 11 yards