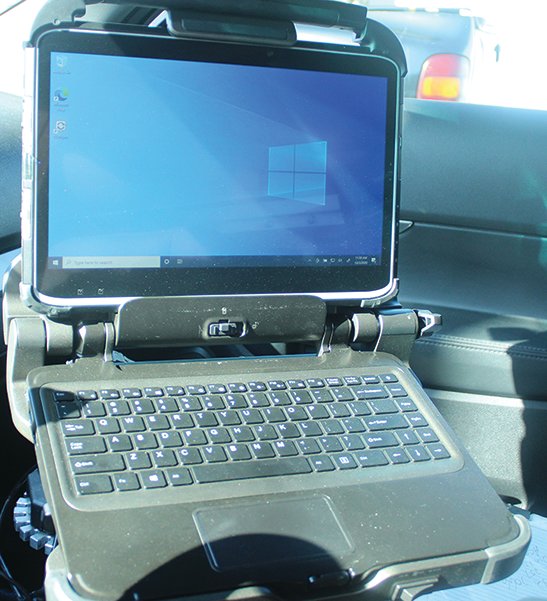 The Nixon Police Department has found a benefit out of the Coronavirus pandemic: a $110,000 CARES grant has funded the purchase of in-vehicle computers for its officers.

Nixon Police Chief Chris Aviles, who was appointed in April 2019, said he is trying to modernize the department. The first step, for him, was securing equipment which would allow officers to remain active in the community — not the office.

“This computer is basically your office away from the actual office,” Aviles said. “And what we're able to do with this computer, is we're basically mobile, but when we go and take a report, we can do it in the field, as opposed to doing the report here at the office and having to come back and deal with the paperwork here.”

With antimicrobial computers and COPsync software, officers in the field can view bulletins from other departments as well as file reports from wherever they are. Aviles said this allows for greater community-focused policing, which helps foster relationships between the department and Nixon residents.

To further the goal of going paperless, as well as work toward limiting physical contact with community members to file reports, the department will be announcing its Citizen Self Reporting System in the near future. This system will allow for police reports to be filed without ever calling or visiting the station. Created by the same developers of COPsync, the CSRS will give Nixon citizens a contactless and accessible method of filing reports for things like lost wallets or stolen items. Aviles said this is the department’s first step into expanding its online presence, to reach the Nixon community in a new way.

Although the department is taking steps to modernize, Aviles said this is just supplementing the things they’re already doing. People will still be able to file reports the old-fashioned way, and current modes of communication will continue to be used.

Aviles said his focus on community-oriented policing is a response to the narrative of tenuous community relations with police which have appeared in national news cycles over the last few years.

“One of the things that we were implementing when l came on board is community policing,” Aviles said. “Well, one of the pillars of that is what you call either strategic policing or neighborhood or inclusive.”

While CARES Act grant funds were not used, the department was able to purchase Stop Sticks, tire deflation devices intended to slow down vehicles in high-speed pursuits, as an item accounted for in its budget.

Lieutenant Greg Huston said a high-speed chase comes through the area “at least once every three months,” which can endanger the community as Hwy 97 runs through the center of town.

“We want to protect our citizens, as well as other law enforcement agencies, by assisting and stopping the suspects if they ever decide to come through,” Huston said. “And we hope that they don't. If they know that we have Stop Sticks, it minimizes that even more.”

Huston said the Stop Sticks have three serrated edges, forming a triangular prism. These edges are made of triangles which can lodge themselves in tires and detach from the stick, deflating them as they drive away.

“The officer throws that out across the street,” Huston said. “It's a safe way to get the vehicle hopefully stuck without causing any blow out or anything like that, which would cause him to veer off, flip over, ultimately have a big accident.”

Aviles said the department will also be getting another public safety tool in its arsenal: the Bolawrap.

The Bolawrap is a taser alternative for subduing those resisting arrest. A handheld launcher discharges eight-foot cables with four-pronged hooks, which wrap around a target’s legs or arms, restraining them. This allows for safe distances during arrests, as well as an option for subduing subjects without relying on pain compliance.

Aviles said the department will soon host a demonstration of the Bolawrap’s use.

The department was also gifted a breaching tool by anonymous local welders for use in the department’s narcotics investigations.

“Our policy does not outline tangible items such as vehicles, breaching tools, etc,” Aviles wrote. “As of now, I wish I could tell you more, but the breaching tool was given to our department anonymously and therefore it will now be listed in the Nixon Police Department inventory which is listed as public record for audit purposes. I wish I knew who had donated it, but I believe they wish to remain anonymous due to the nature of the tool's use.”