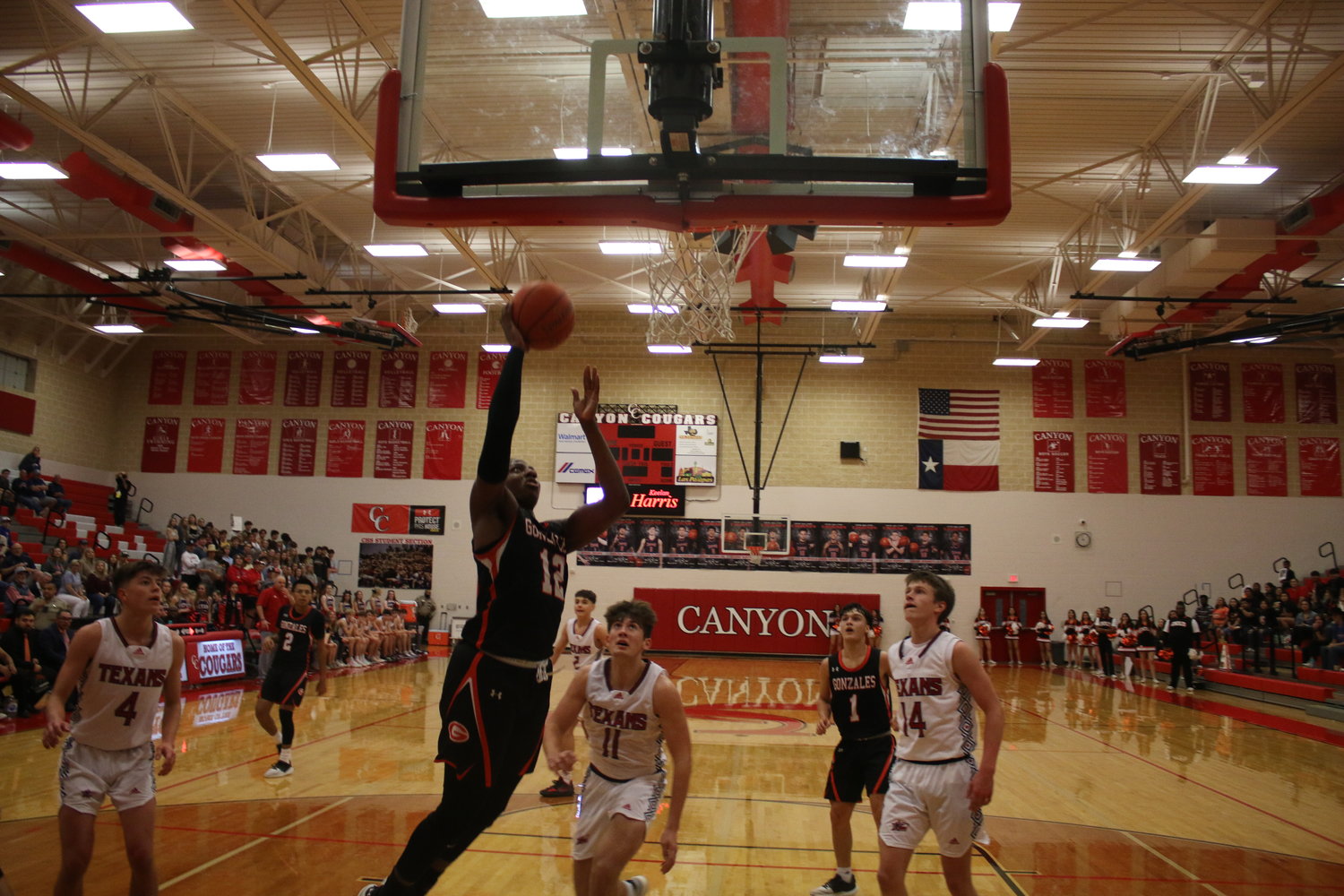 Jeremiah Hastings powers his way to the basket for two of his team-high 20 points against Wimberley on Tuesday, Feb. 22. Hastings’ inside play helped keep his team close.
Lew K. Cohn 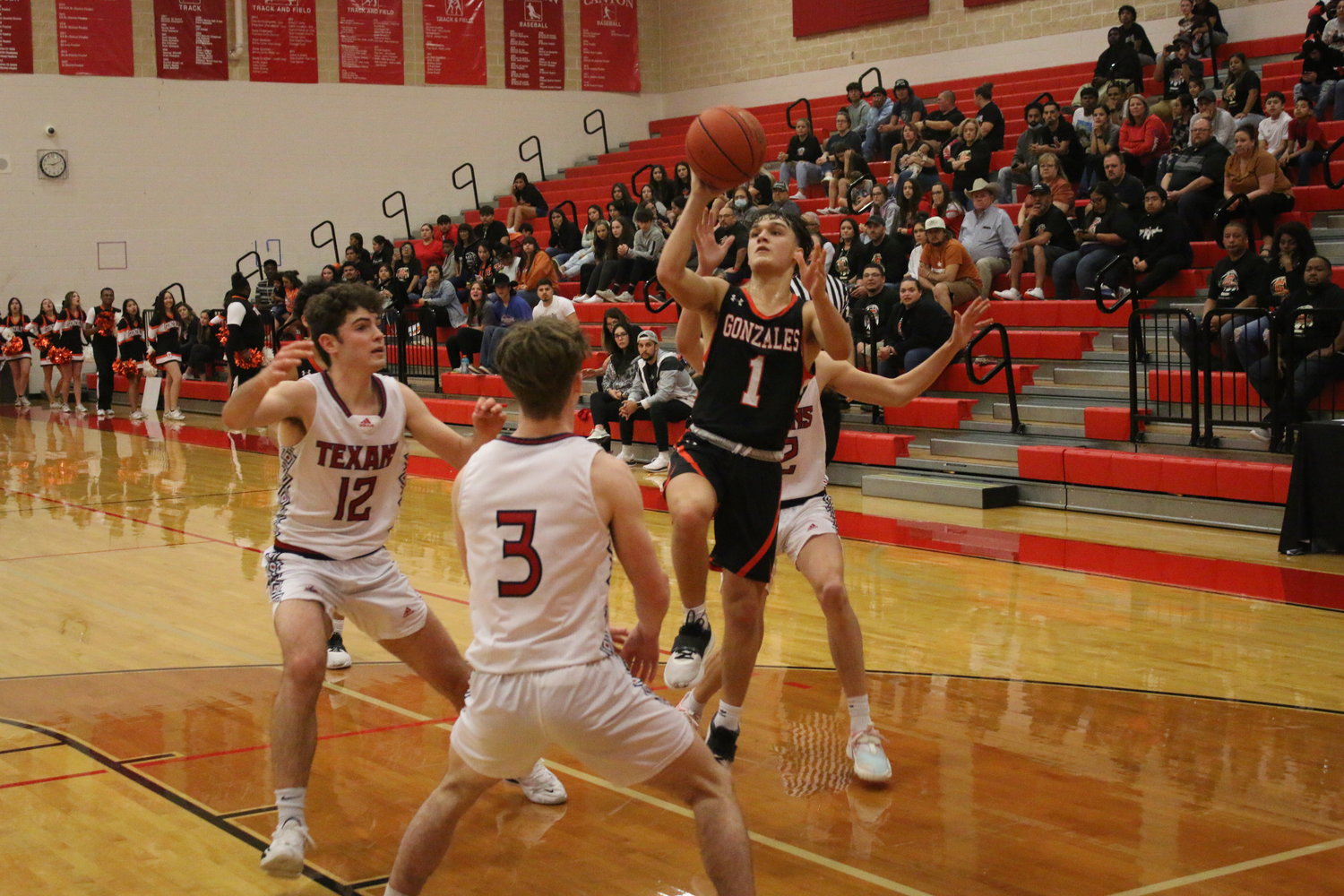 Senior Brady Barfield puts up a shot on a drive against the Texans in Tuesday’s bi-district playoff game. Barfield scored 15 points and hit four three-pointers in the game.
Lew K. Cohn 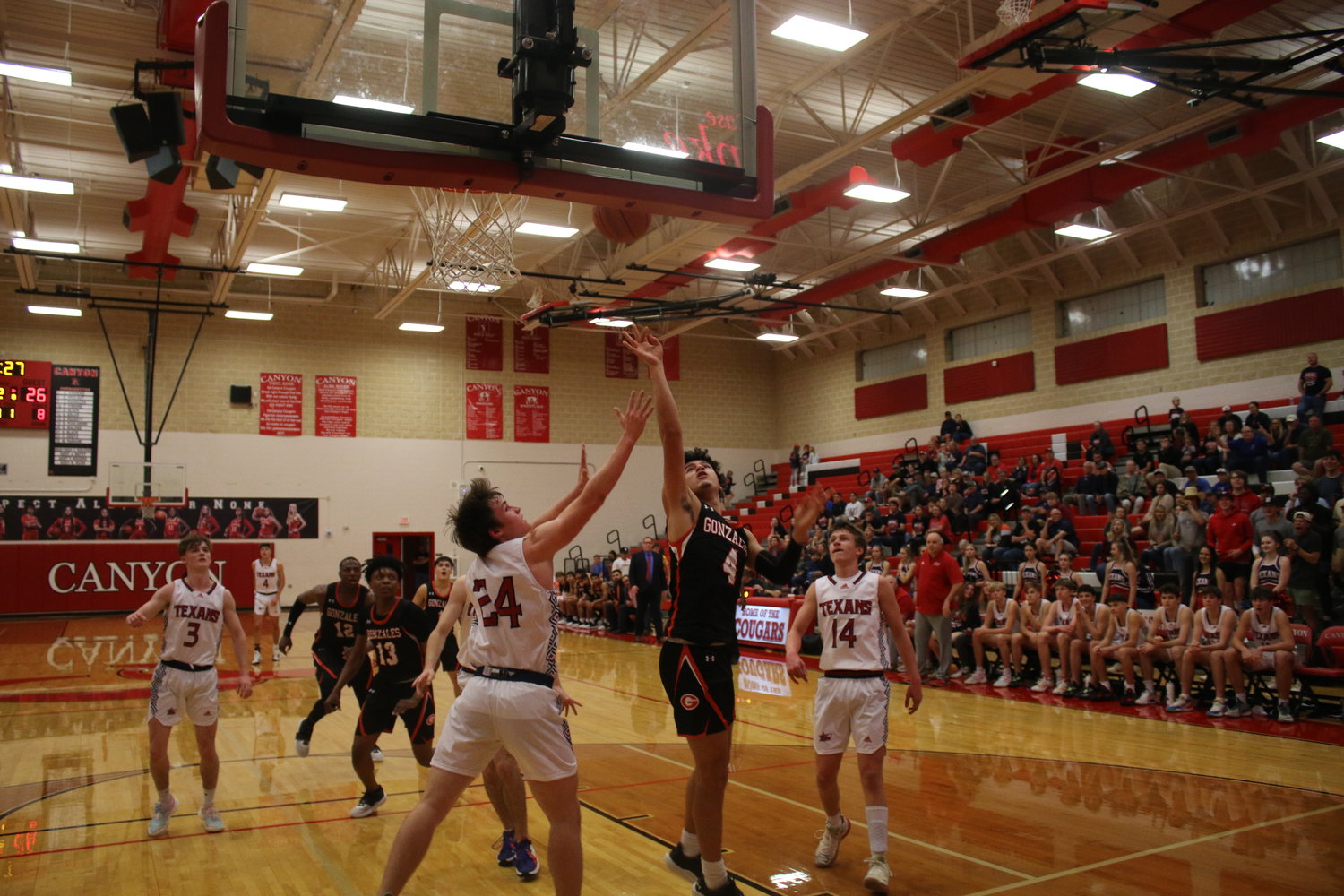 Junior Angel Martinez (4) rebounds and quickly puts it back for two points to tie the game at 28-28 against Wimberley in the bi-district round Tuesday, Feb. 22. Gonzales would lose, 71-65.
Lew K. Cohn 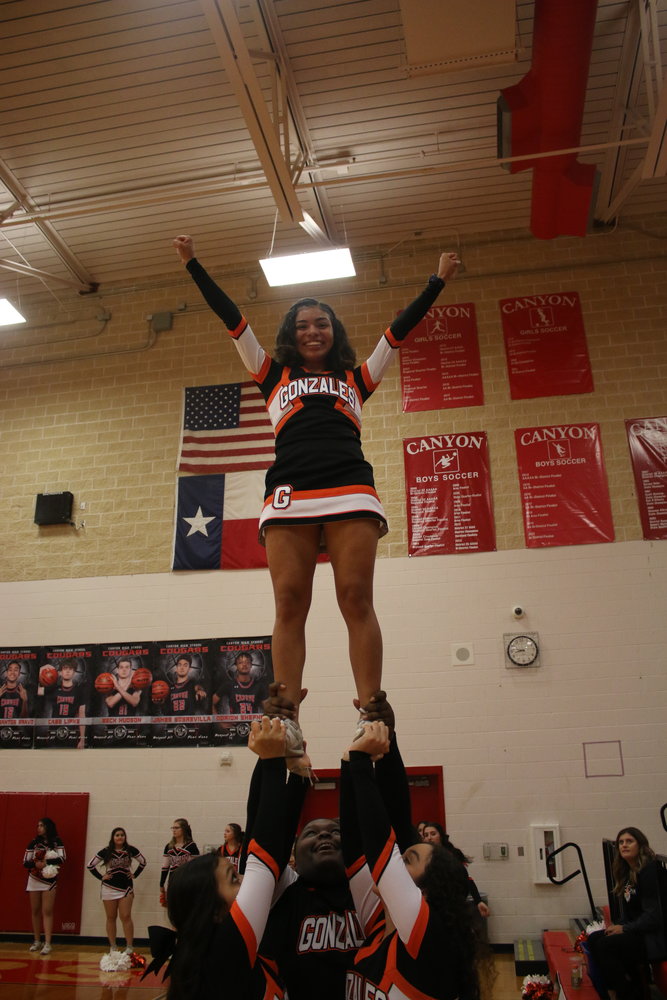 Senior Trinity Barr stands tall during a lift by her fellow Gonzales High School cheerleaders at Tuesday’s bi-district playoff game between the Apaches and the Wimberley Texans.
Lew K. Cohn 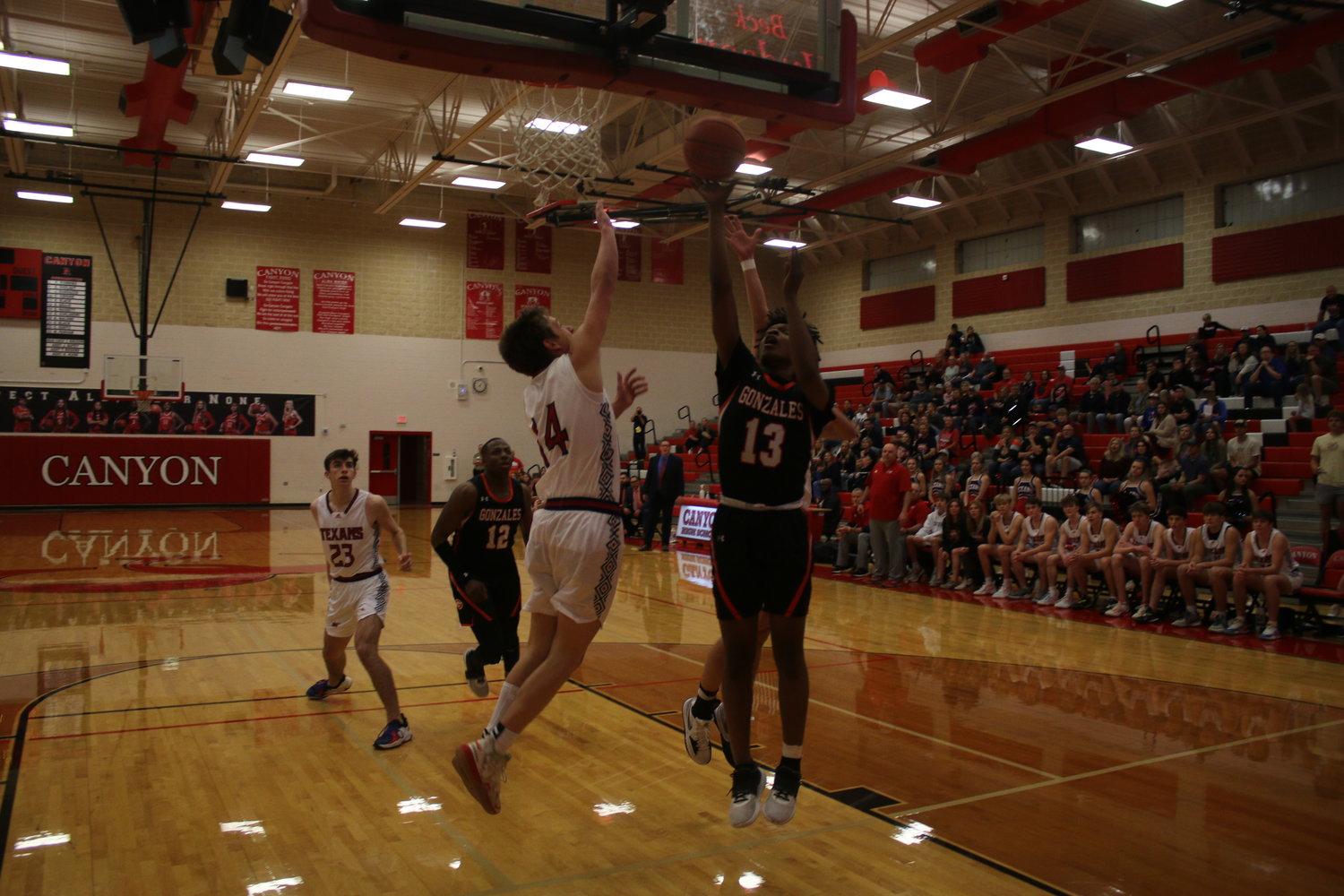 Senior Alex Escobedo goes up and gets fouled while hitting a shot early in the first period of Tuesday’s bi-district playoff game. Escobedo completed a three-point play by hitting a free throw as well.
Lew K. Cohn 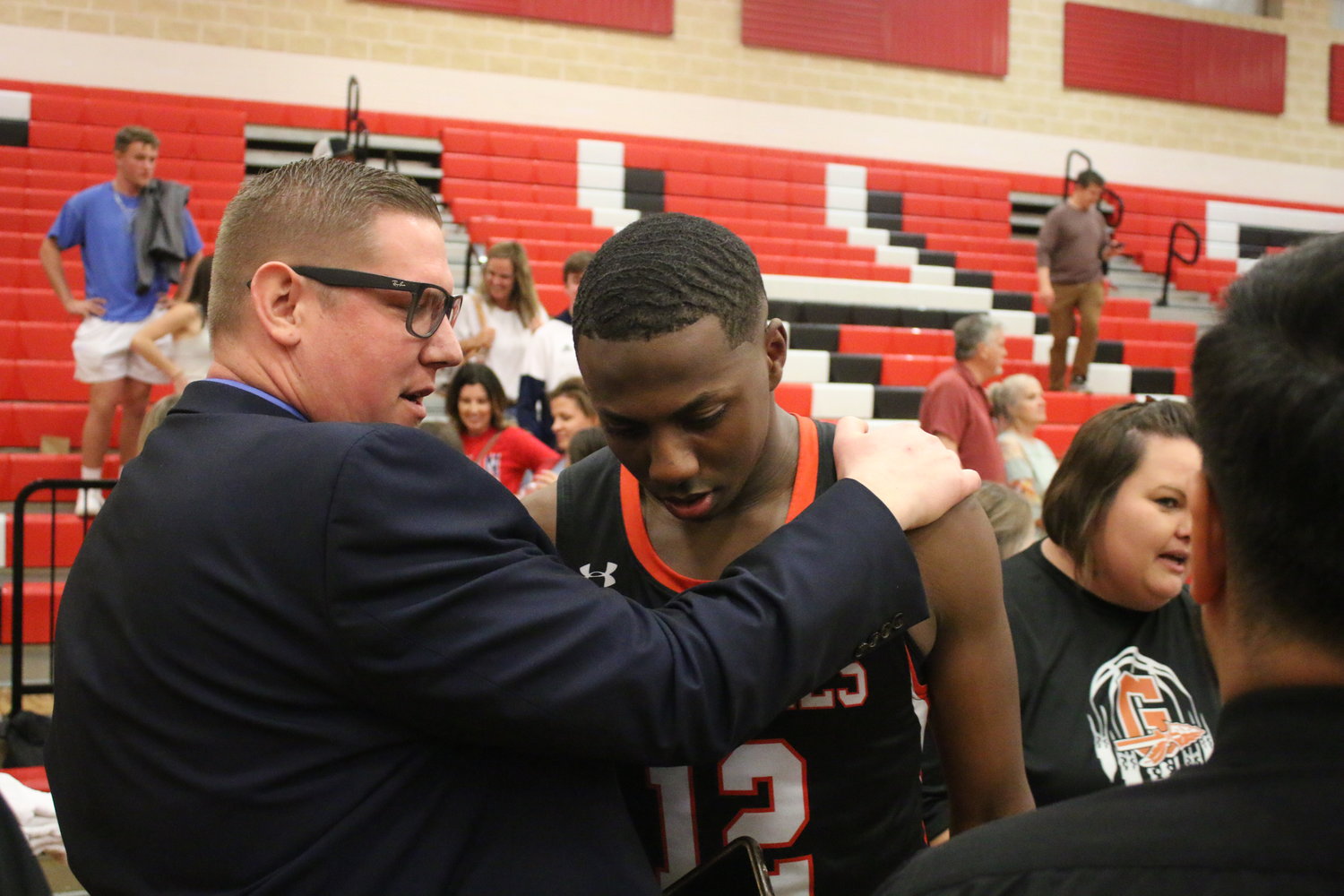 NEW BRAUNFELS — The Gonzales Apaches hung close to Wimberley in their bi-district playoff game Tuesday, Feb. 22, but the Texans came up with some big shots and bigger free throws down the stretch in a 71-65 win at Canyon High School.

Gonzales actually started the game with a 6-0 run after junior Angel Martinez hit a free throw, Hastings  scored inside and Escobedo completed a three-point play with a bucket and ensuing foul shot.

They would eventually see that lead jump to 9-2 after a Barfield three-pointer, but Wimberely came back with a 13-4 run of their own to seize a 15-13 lead at the end of the first period, led by sophomore point guard Hayes Pounds, who was a thorn all night in the side of the Apaches.

In the second period, the Texans were up 19-17 when they went on a 9-2 run to increase their advantage to 28-19. It looked like the game might be getting away from Gonzales, especially after several charges were called against the Apaches as they tried to drive to the hoop. However, the boys in the black and orange were not going to go away quietly.

Hastings made a strong move to score and then Aguayo hit a three-pointer to make it 28-24. Hastings scored again but missed a chance at a three-point play on an errant foul shot, however Martinez was johnny-on-the-spot for a putback that tied the game at 28-28.
With the score tied at 30-30, Wimberley closed out the waning seconds of the half with a 6-2 run and took a 36-32 lead into the lockerroom at the break.

The fourth period saw the Texans take an eight-point lead as they increased their lead to 56-48. A Barfield trey made it 56-51, but Wimberley then went on a 6-2 run to grab a nine-point lead at 62-53. Gonzales would make a late run to close to within four points at 64-60 on another Barfield trey with 1:41 left in the game as a full-court press began to help create some turnovers for the Apaches.

Gonzales attempted to foul the Texans to try to shorten possessions and leave themselves time to come back but Wimberley — and particularly Pounds — had other plans. The Texans hit 9-of-13 free throws, with Pounds hitting four of five and scoring 10 of his game-high 31 points in the final frame. And to make matters worse, Hastings — Gonzales’ best answer inside the paint — fouled out with the score at 67-62 with 1:02 left to play.
Time ran out then on the Apaches. Wimberley took a 70-62 lead on a free throw and a layup. Barfield was fouled shooting a trey and hit all three free throws to close it to 70-65 with 16 seconds left, but the Apaches would not score again before time expired.