Pleasanton pressure too much for Gonzales in 62-44 loss 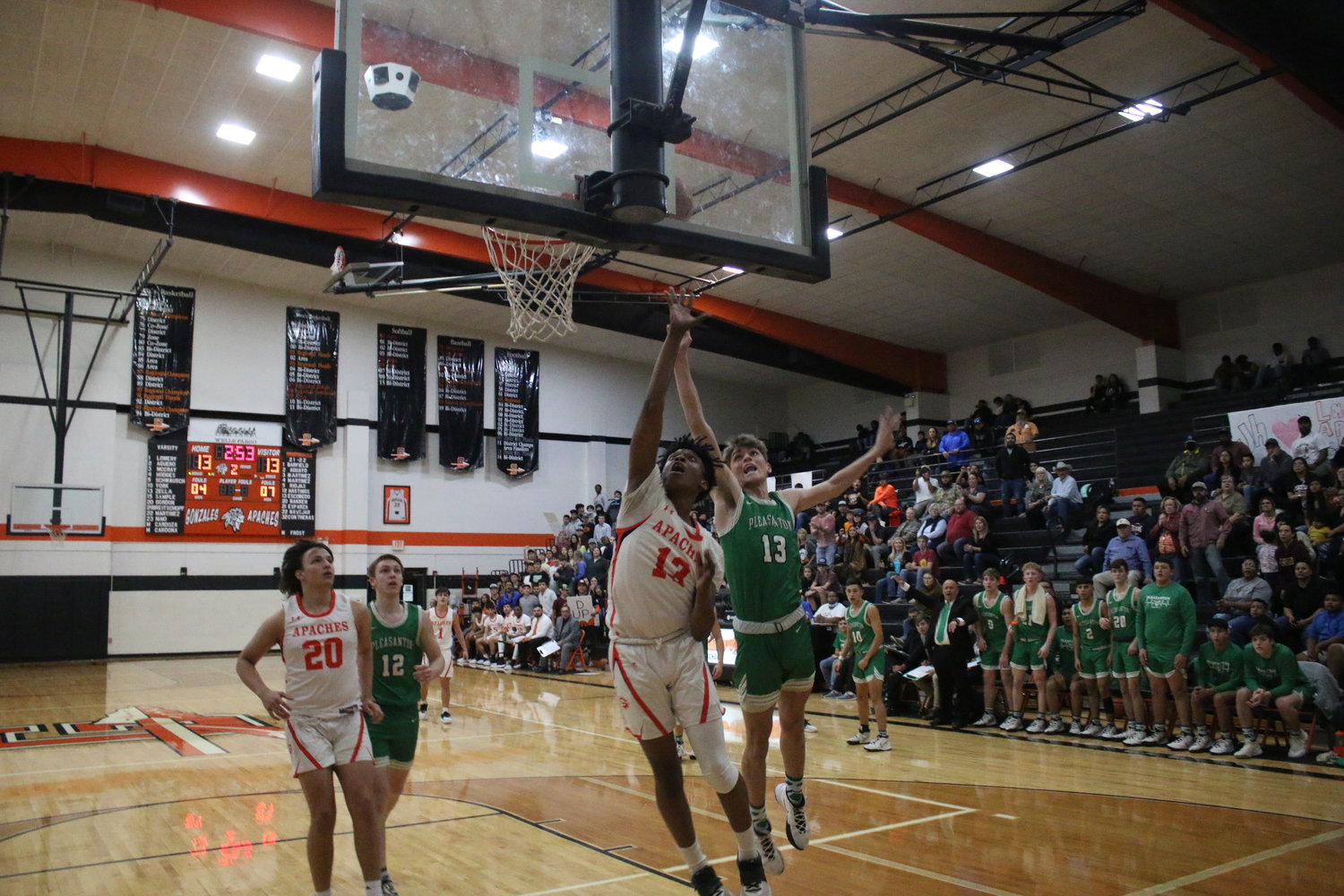 Gonzales forward Alex Escobedo follows up an offensive rebound with a putback into the hoop in the first quarter of the Apaches’ 62-44 loss to Pleasanton on Tuesday, Feb. 8. Escobedo scored 16 points and was an offensive bright spot for Gonzales.
Lew K. Cohn 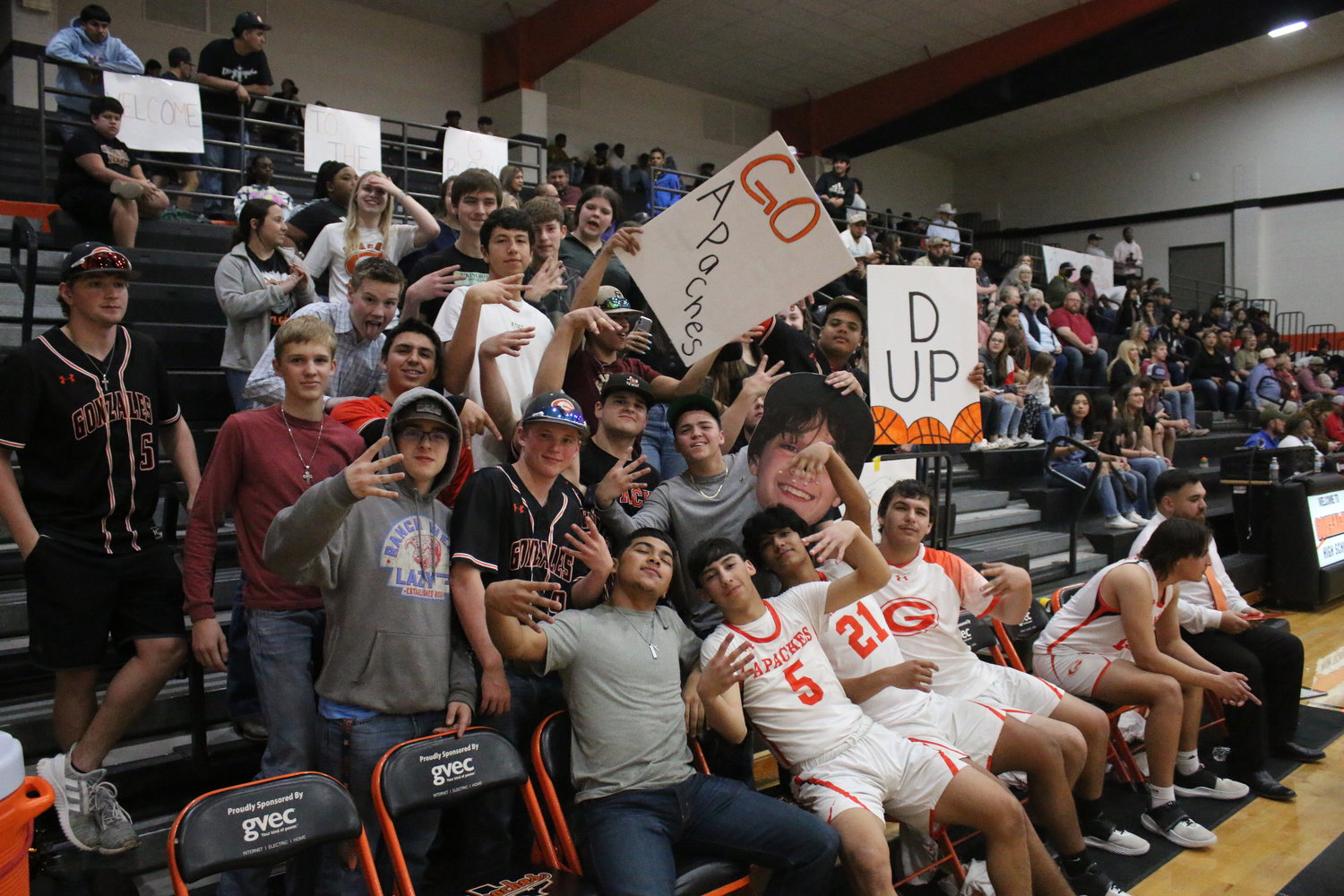 A Pleasanton full-court press that would border on criminal harassment if it occurred outside the gymnasium forced numerous Gonzales turnovers and helped the visiting Eagles fly past the hometown Apaches, 62-44, on Tuesday, Feb. 8, in a District 27-4A matchup.

The loss keeps Gonzales (16-7, 3-4 in district) in third place now with one regular season game left to play on Tuesday, Feb. 15, when the fourth-place Cuero Gobblers come to town for Senior Night.

The Apaches took the lead several times in the first half and were within striking distance at just three points down until midway through the third quarter, but defensive pressure, miscues and ice-cold outside shooting all spelled trouble for the home squad.

In the first period, Gonzales was up 3-0 before Pleasanton went on an 11-4 run of their own to make it 11-7 after eight minutes of play. In the second period, forward Alex Escobedo scored six of the team’s 10 points to provide a spark for the Apaches and helped them come back to take a 17-15 lead before the Eagles scored the final five points to claim a 20-17 advantage at the break.

In the third period, Gonzales closed to within one point at 24-23 as Jeremiah Hastings scored six of his team-high 17 points. But the Apaches fouled Pleasanton junior point guard R.J. Marquez as he hit a three-pointer and he converted the ensuing free throw to put the Eagles back up by five at 28-23. Marquez would score 15 of his game-high 21 points in the final two periods.

Gonzales closed to 28-25 with 4:31 left in the third on a Xavier Aguayo fadeaway jumper, but then Pleasanton turned up the defensive pressure, either forcing turnovers or bad shots by Gonzales. Pleasanton went on a 14-2 run to take a 15-point lead at 42-27 at the end of the third — a quarter in which the Eagles outscored the Apaches, 22-10.

In the final frame, Gonzales cut the lead back to 13 at 45-32, but Pleasanton answered with a 10-4 run, aided by a technical foul against Hastings, who after a foul slammed the ball down in frustration (it went up high above the goal and came back down through the net, making it the most impressive Apache shot of the night).

The rest of the game, Gonzales would never get any closer than 16 points. In the second half, Pleasanton put up almost as many points (42) as the Apaches did the whole game (44).

Gonzales still has a shot to finish in second place if La Vernia loses its final two games to Navarro and Pleasanton and the Apaches can beat the Gobblers at home. That would create a tie between La Vernia and Gonzales that would be settled by a one-game playoff. If La Vernia wins one of its final two games, it will be district runner-up.

If Cuero loses to Pleasanton but beats Gonzales, the Gobblers will be the third-place team by virtue of two district victories over the Apaches. A Gonzales win over Cuero clinches at least third place.