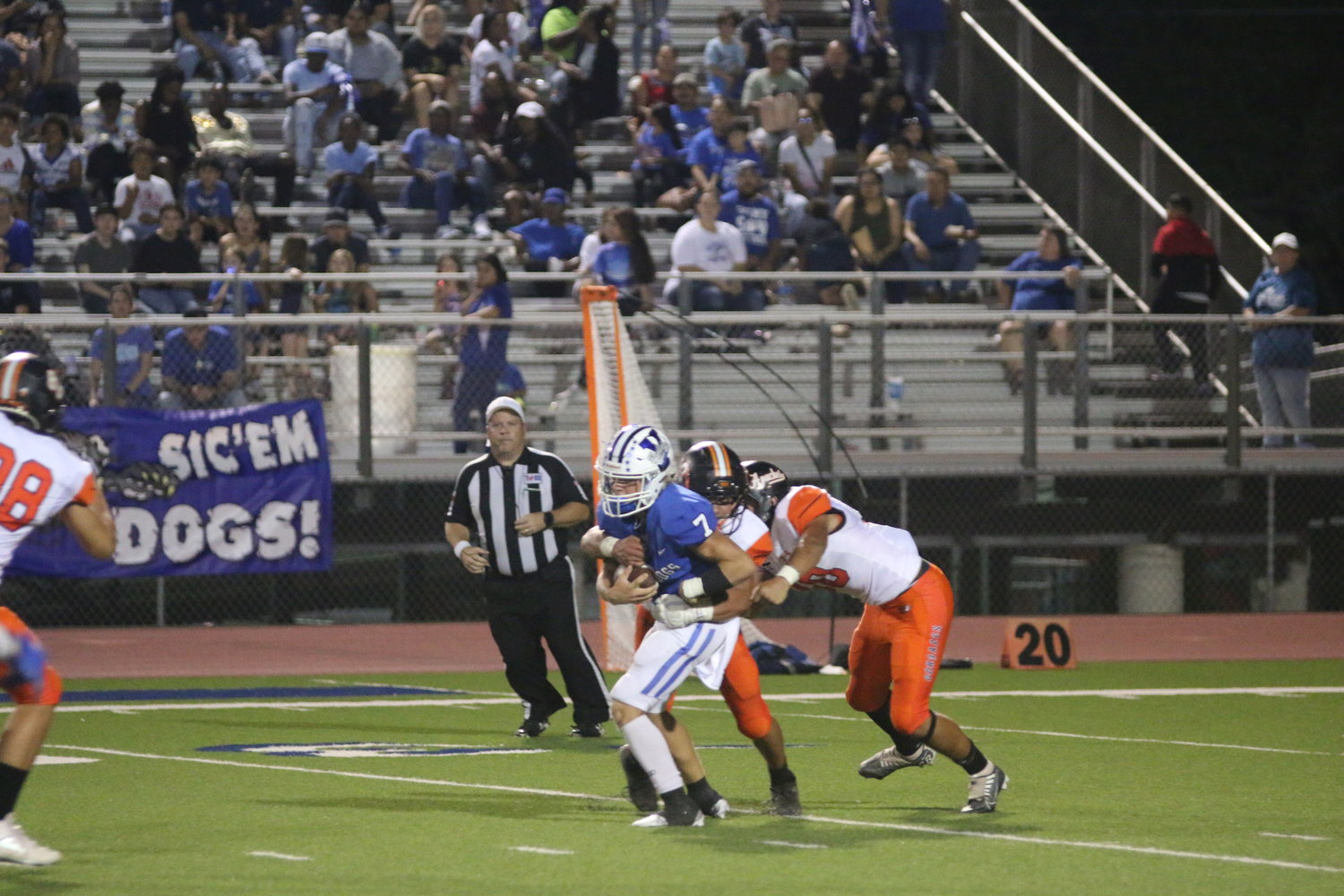 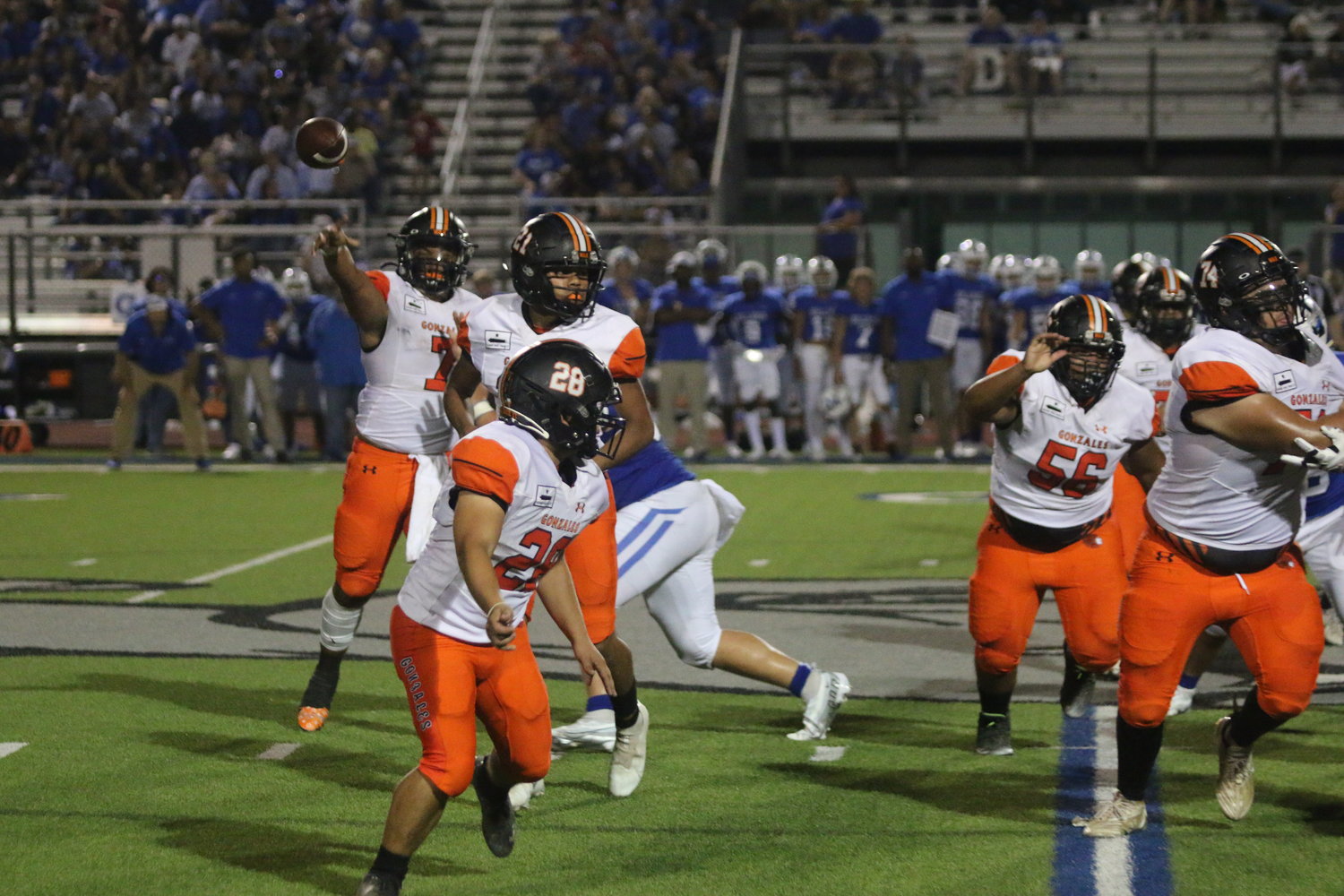 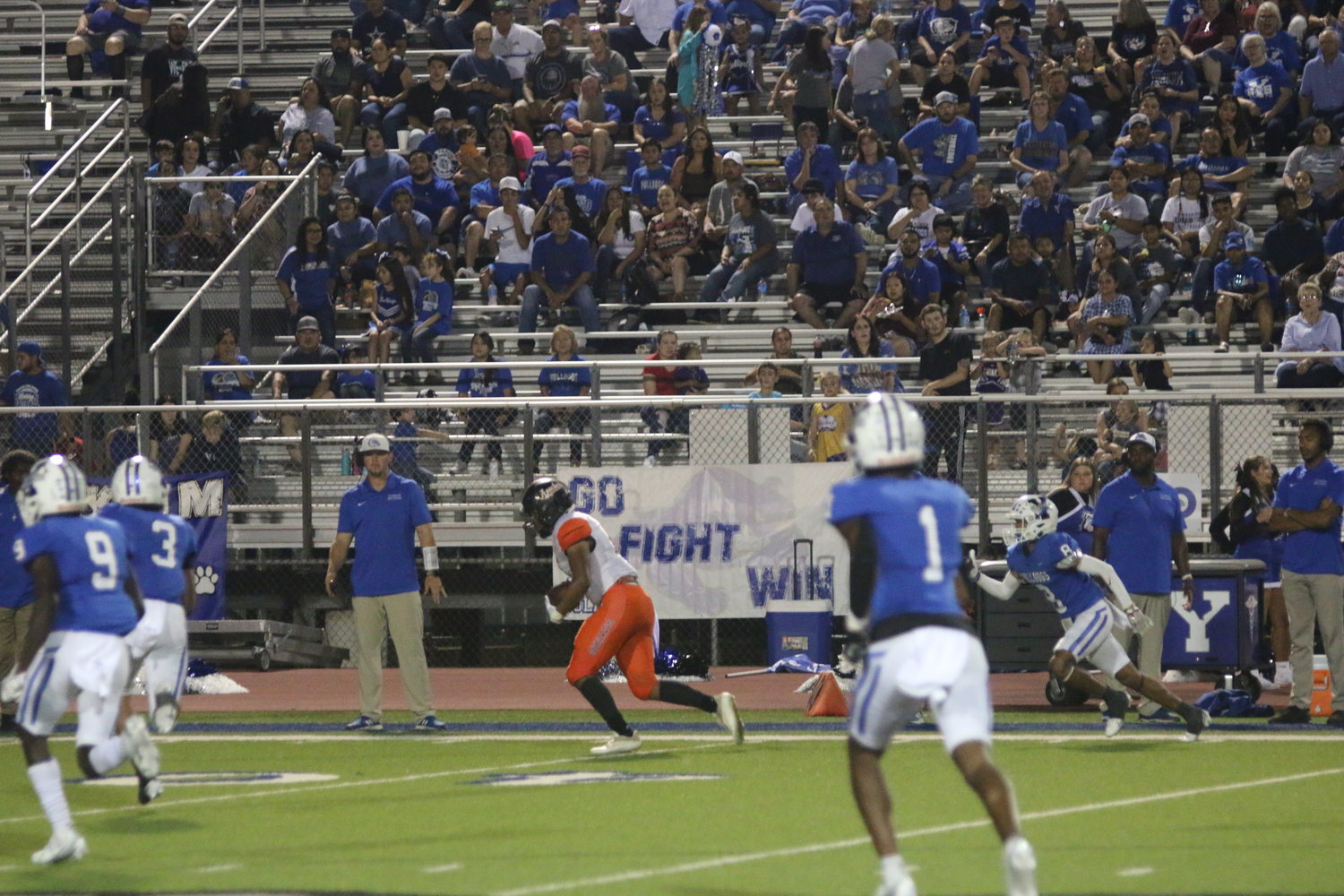 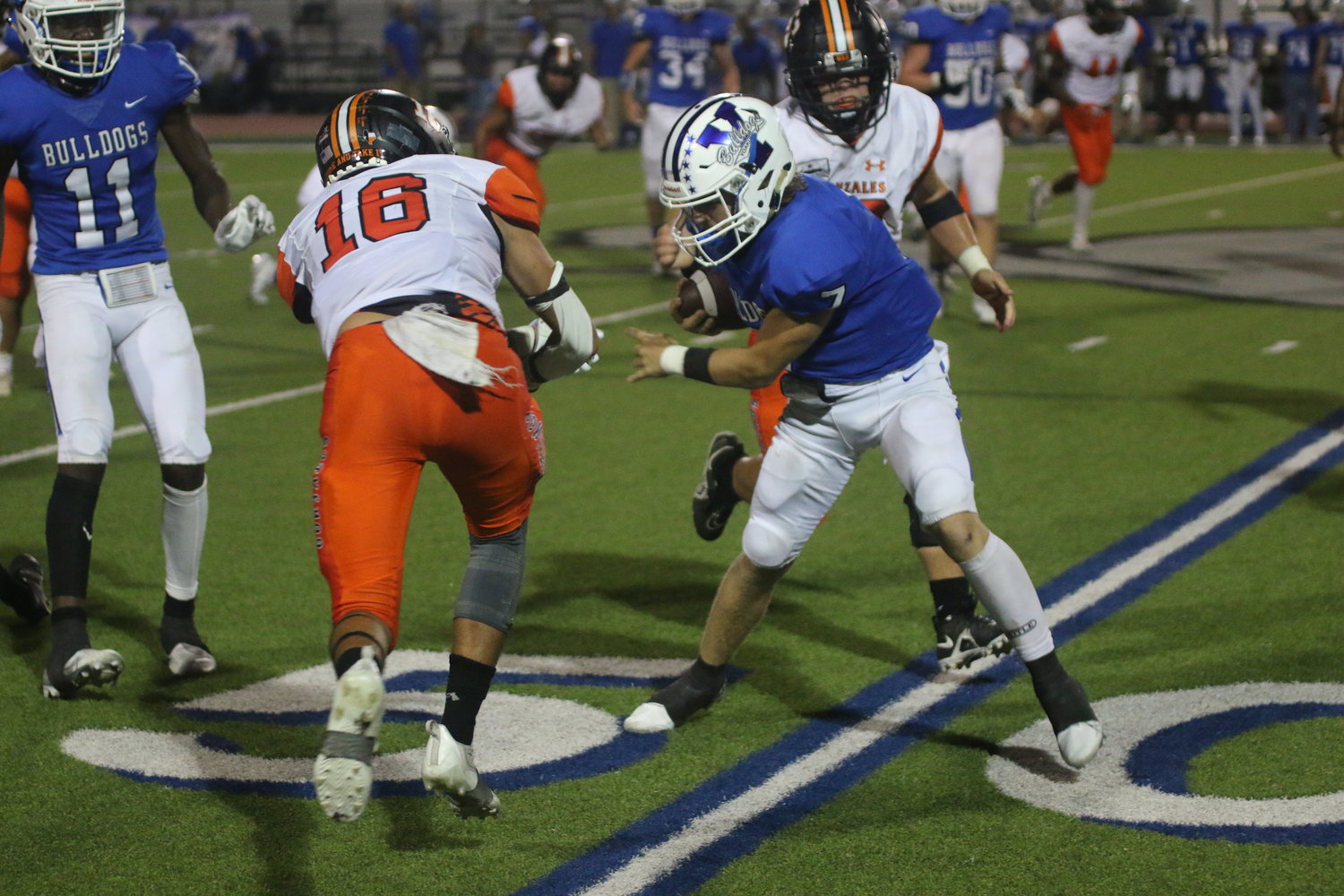 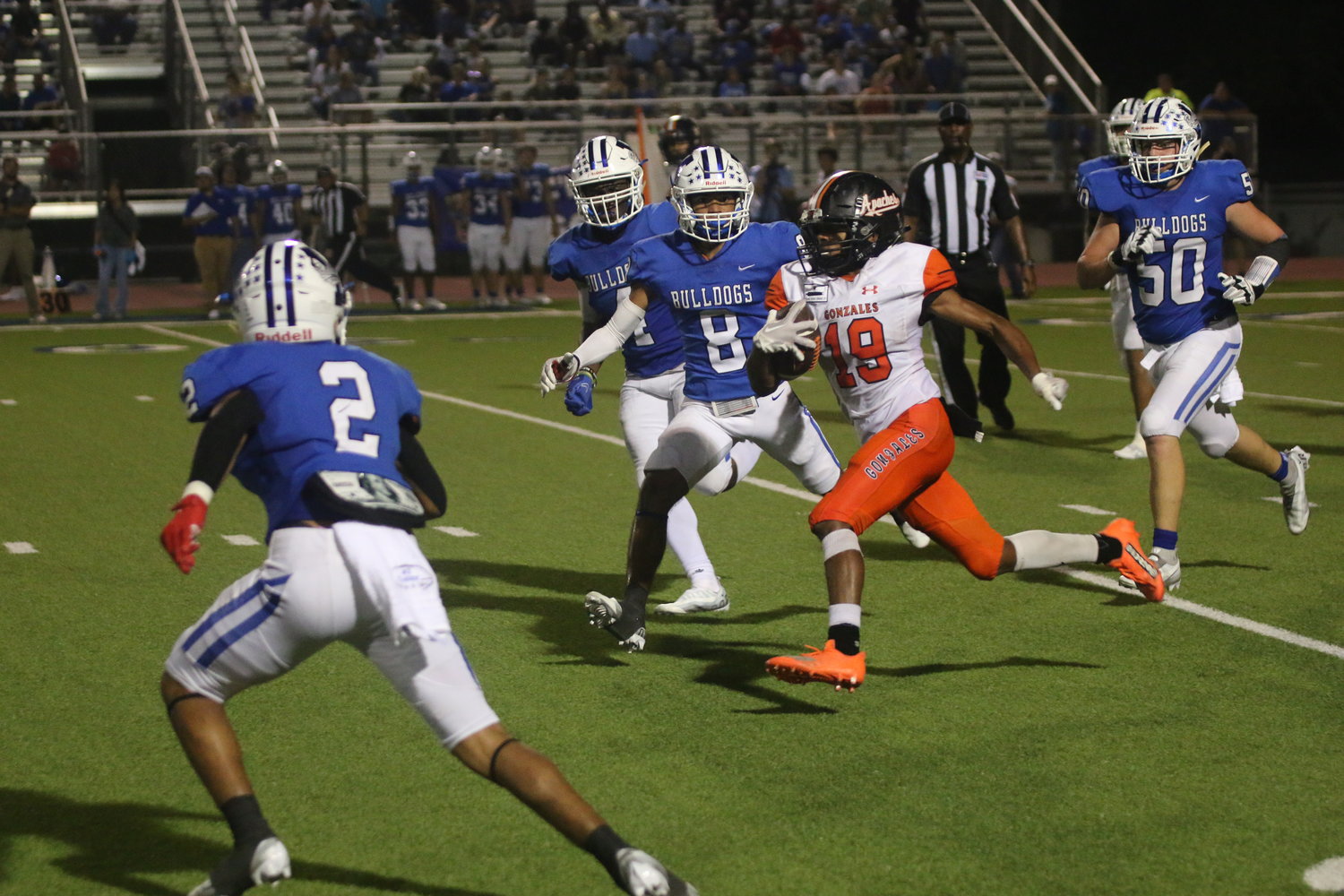 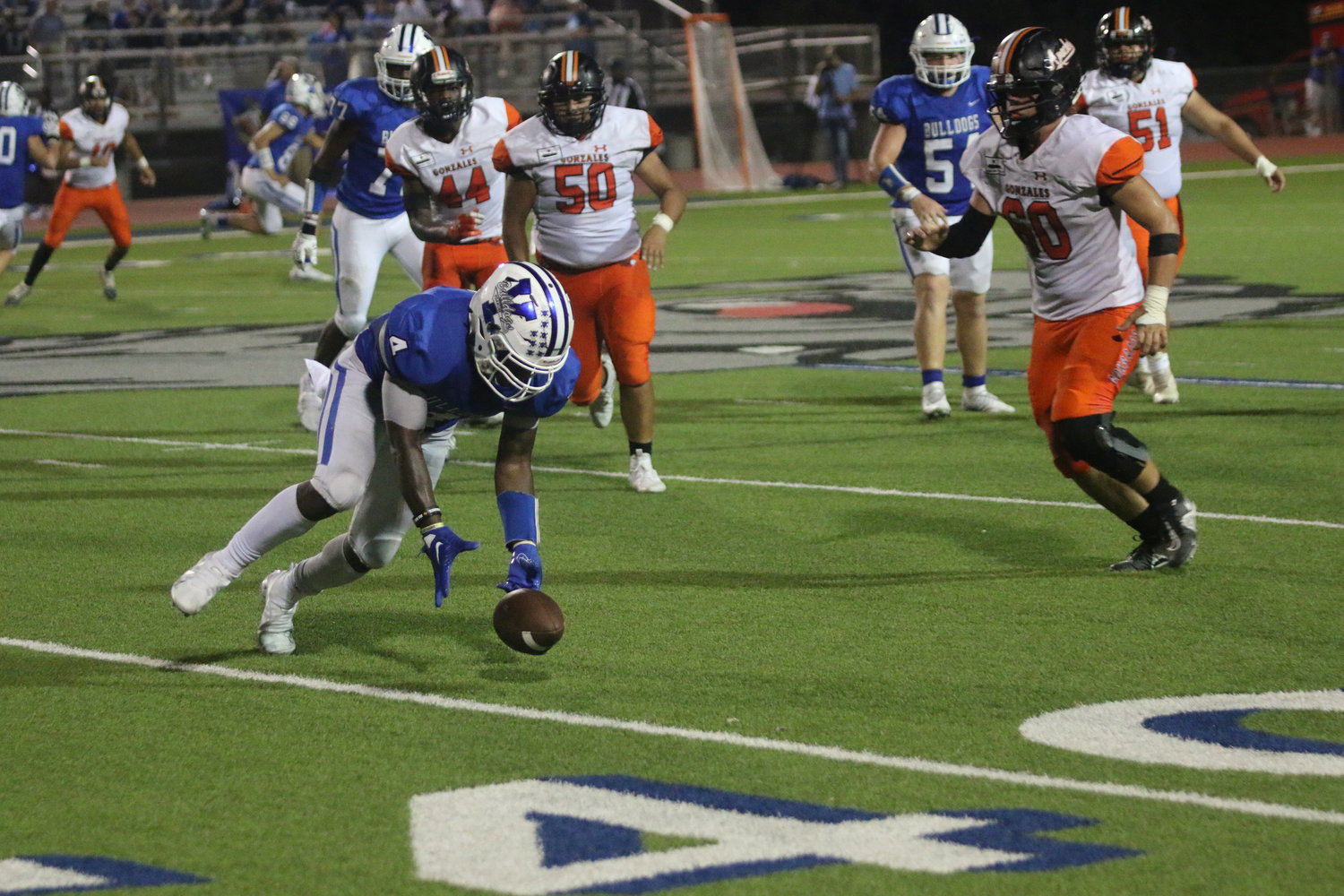 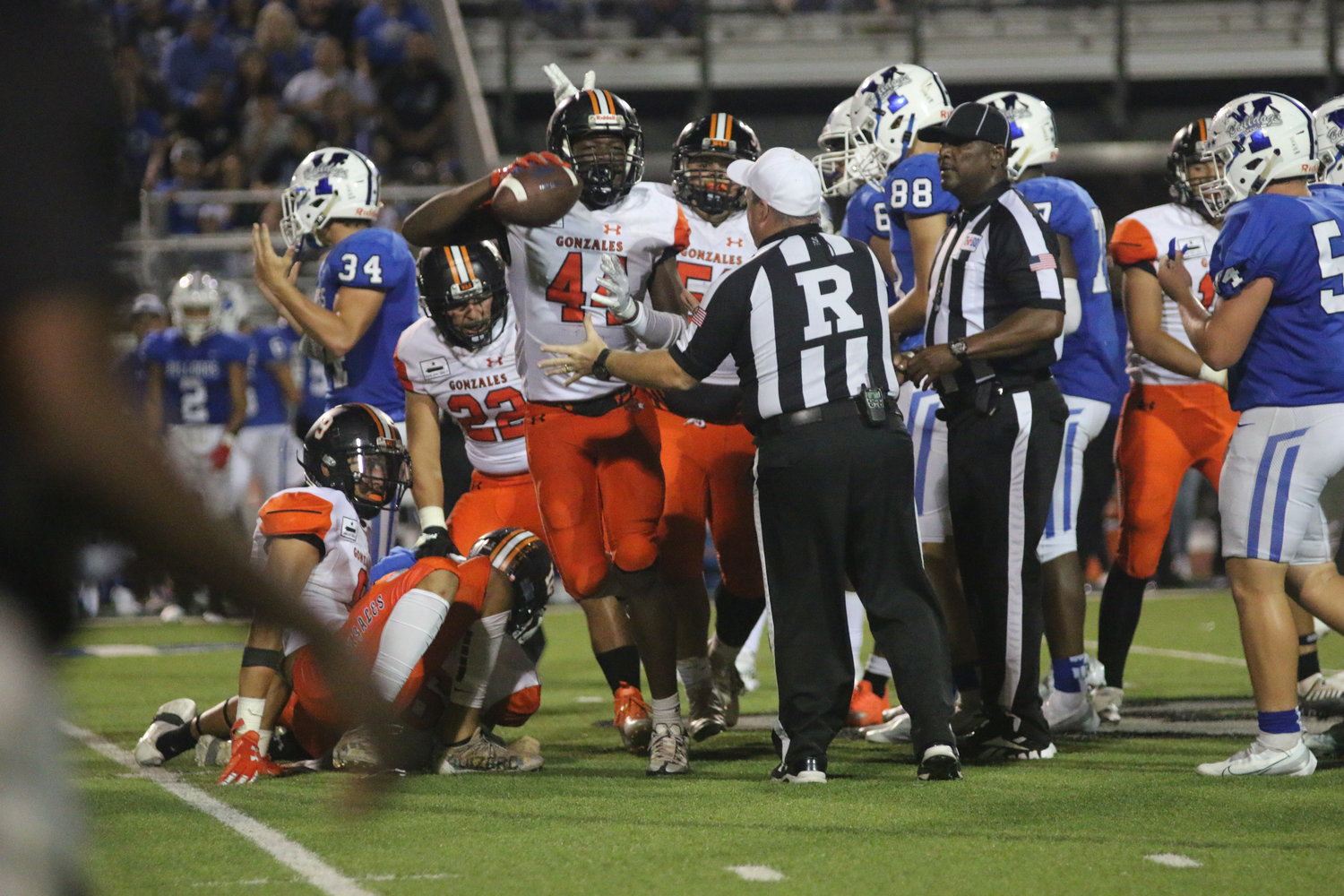 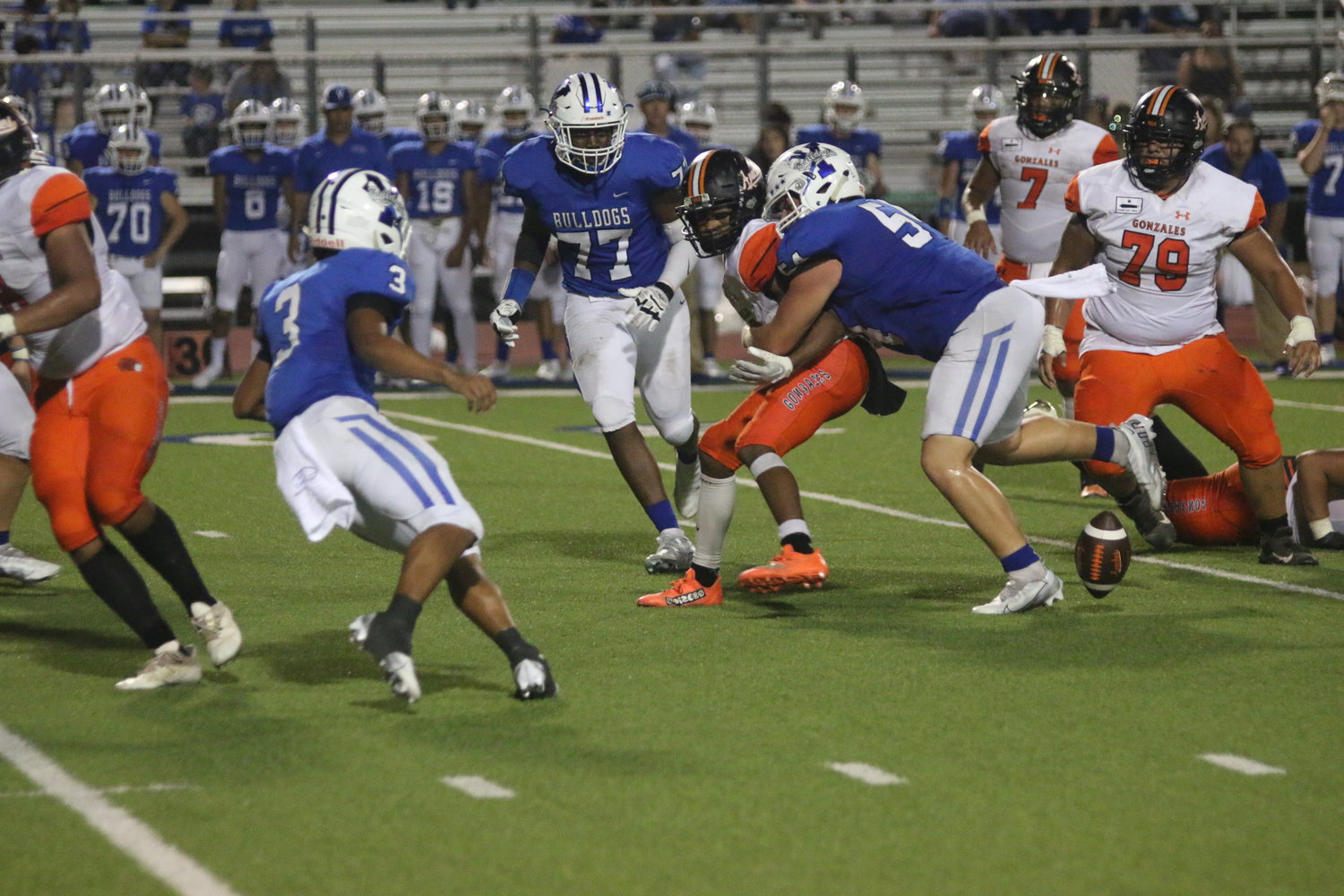 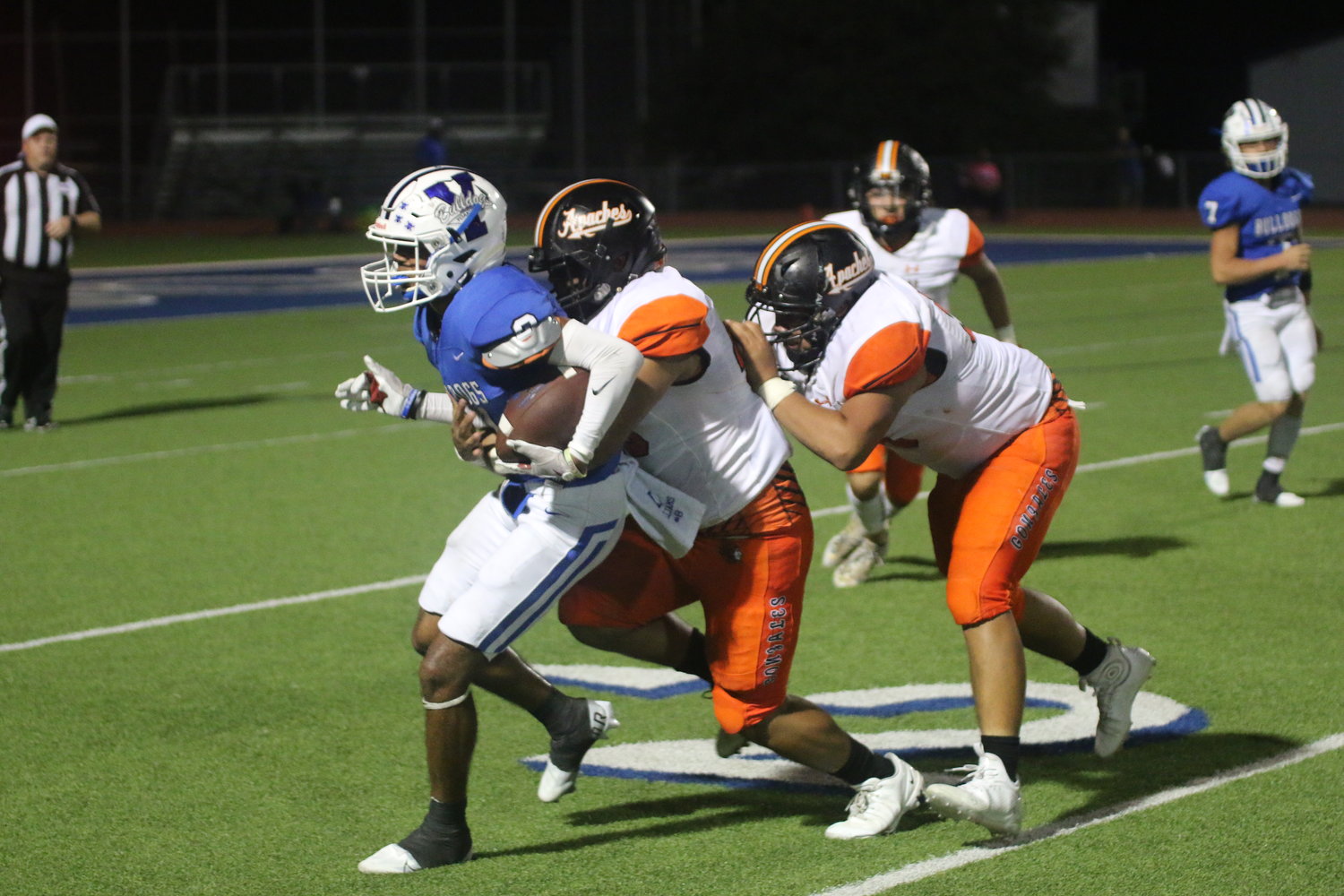 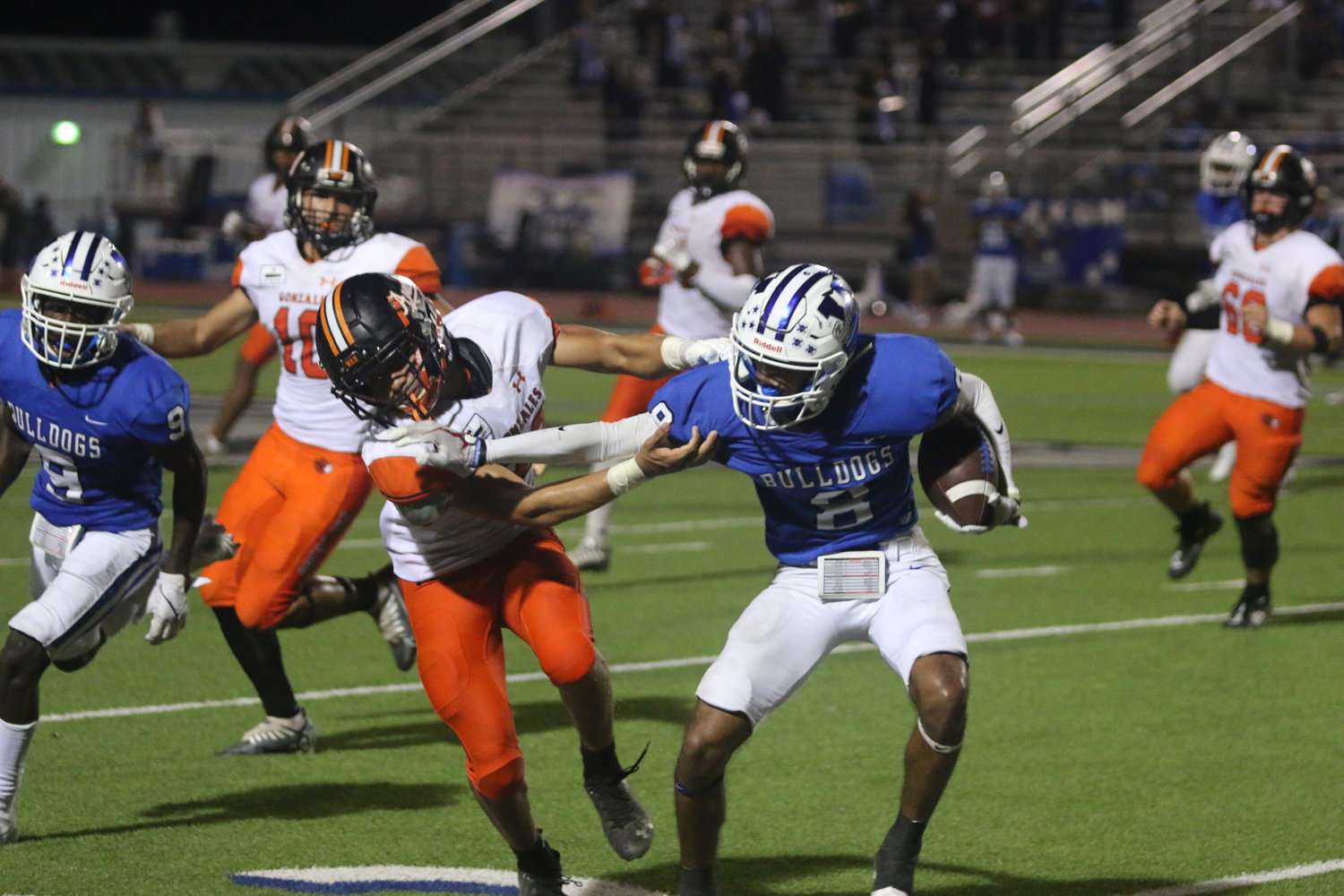 Friday night’s game against the host Yoakum Bulldogs saw the Gonzales Apaches get only six offensive snaps in the first quarter, compared to 20 for Yoakum.

By the time the first 12 minutes had come off the clock, the Bulldogs had already built a 14-0 lead and were on their way to another TD.

The Apaches got something going in the second half, but still came up on the short end of a 42-15 road loss to end their non-district slate of games with a 2-3 record. Yoakum improved to 2-3 on the season with their second-straight win.

“We shot ourselves in the foot right away early on with mistakes defensively, you know,” Gonzales head coach Joey Rivera said. “We had some stops, we thought, and we missed some tackles. And all of a sudden, we were afraid of their athletic ability coming in and they showed it some on a lot of those runs early on. And then us putting the ball on the ground didn’t help us any.

“It's tough to overcome those things against a good football team. And Yoakum may still be figuring things out, but they’re a good team. They’ve been banged up, too, and had some really good opponents they have played as well.”

Gonzales tried a squib kick to start the game that Yoakum recovered at its own 49. The Bulldogs slowly move the ball down the field, eating up clock in the process. On the 12th play of the drive, a fourth and goal from the Gonzales 1, their big fullback, Tyjuan Garza, bullied the ball on a run for the game’s first points. The PAT kick by Markangel Sanchez made it 7-0 with 6:09 to go in the first quarter.

The Apaches had the ball on their 28 for their first drive and saw running back Derrick Garza get injured on his first carry, a one-yard run.

On the next play, freshman David Clack fumbled the ball and it was recovered at the 28 by Yoakum. The Bulldogs would take just five snaps to score with Qyion Williams scoring out of a wildcat formation on a six-yard run with 3:17 left in the first and Sanchez’ PAT made it 14-0.

Gonzales was held to a three-and-out on its next drive and punted it to the Yoakum 48. Bulldogs’ quarterback Ty Gordon threw a short pass to Kadarius Price, who reversed field and changed a sure loss into a 28-yard gain. A few plays later, as the game went into the second quarter, Gordon evaded a sack and ran the ball in from 20 yards to score Yoakum’s third TD. Sanchez’ PAT made it 21-0 with 11:45 to play in the half.

The Apaches finally started to move the ball a little as the teams exchanged field position on a couple of drives late in the second quarter. However, offsetting penalties on a punt by Gonzales forced a rekick that was shanked and the Bulldogs got the ball on their own 43. They would move the ball to the Gonzales 21 with 2 seconds left and attempted a 38-yard field goal, but the kick was wide right, ending the half.

In the third quarter, Gonzales finally capitalized on the opening possession. After Clack picked up eight on first down, quarterback Jarren Johnson connected with Josh Esparza when the man covering him got tripped up. Esparza then rumbled down the sideline for a 64-yard TD catch and run. Emiliano Lopez’ PAT kick was good and the lead was cut to 21-7 with 11:29 to play in the third quarter.

The teams exchanged possessions and then Yoakum got on the board again with 7:02 to play in the third when Gordon and Price hooked up for a 32-yard TD pass. A PAT kick made it 28-7.

The Apaches would answer on the next drive. On first and 20 after a holding call, Clack found running room, squirted out to the visitors’ sideline and got 65 yards before being brought down at the Bulldog 15. Two plays later, Johnson ran the ball in from 10 yards out. He then executed a perfect two-point pop pass to Esparza on the conversion to cut the lead to 28-15 with 5:53 left in the third quarter.

However, Yoakum would not be denied. They needed just one play — a 59-yard TD pass from Gordon to Corey Gomez — to eliminate the Apache momentum. The kick was good, making it 35-15 with 5:44 left in the third quarter.

Yoakum tried an onside kick which failed, but Gonzales fumbled on their second play of the ensuing drive. However, Gordon made his only mistake of the night and fumbled the ball back to the Apaches two plays later.

Gonzales moved the ball to the Yoakum 28, but couldn’t pick up a fourth and 11. The Apaches stopped Yoakum on their own 36 on fourth down on their next possession, but again turned the ball over on downs failing to get a first down.

Eventually, with 3:57 left in the game, the Bulldogs would score the last points of the game with a two-yard TD run by Williams and a PAT kick to make it 42-15.

“Like I say every week we’ve got to focus on ourselves,” Rivera said. “I was very proud of the effort our kids put out there. We had some guys in spots they hadn’t really played in before and they stepped it up and played hard for four quarters.”

Gonzales is on a bye week this week due to Come and Take It weekend, but they will travel to Caldwell to play the Hornets in the district opener on Friday, Oct. 7. Caldwell is 0-4 so far this season.

“We’re 0-0 again, but we've got to get healthy,” Rivera said. “We were banged up in a lot of spots and we were very thin to start off with. We've got to go back to the drawing board and maybe reshuffle some things and have some guys ready to go in two weeks.

“The bye week couldn’t have come at a better time. We can get some guys healthy and our grading period ends as well, so we’ve got to get on top of that and get things going in the right direction.”

Lopez was injured in the second half of the game with an apparent neck stinger and was taken to an EMS ambulance as a precaution after experiencing twitching and jumping in his upper extremities. His condition was not known Saturday.