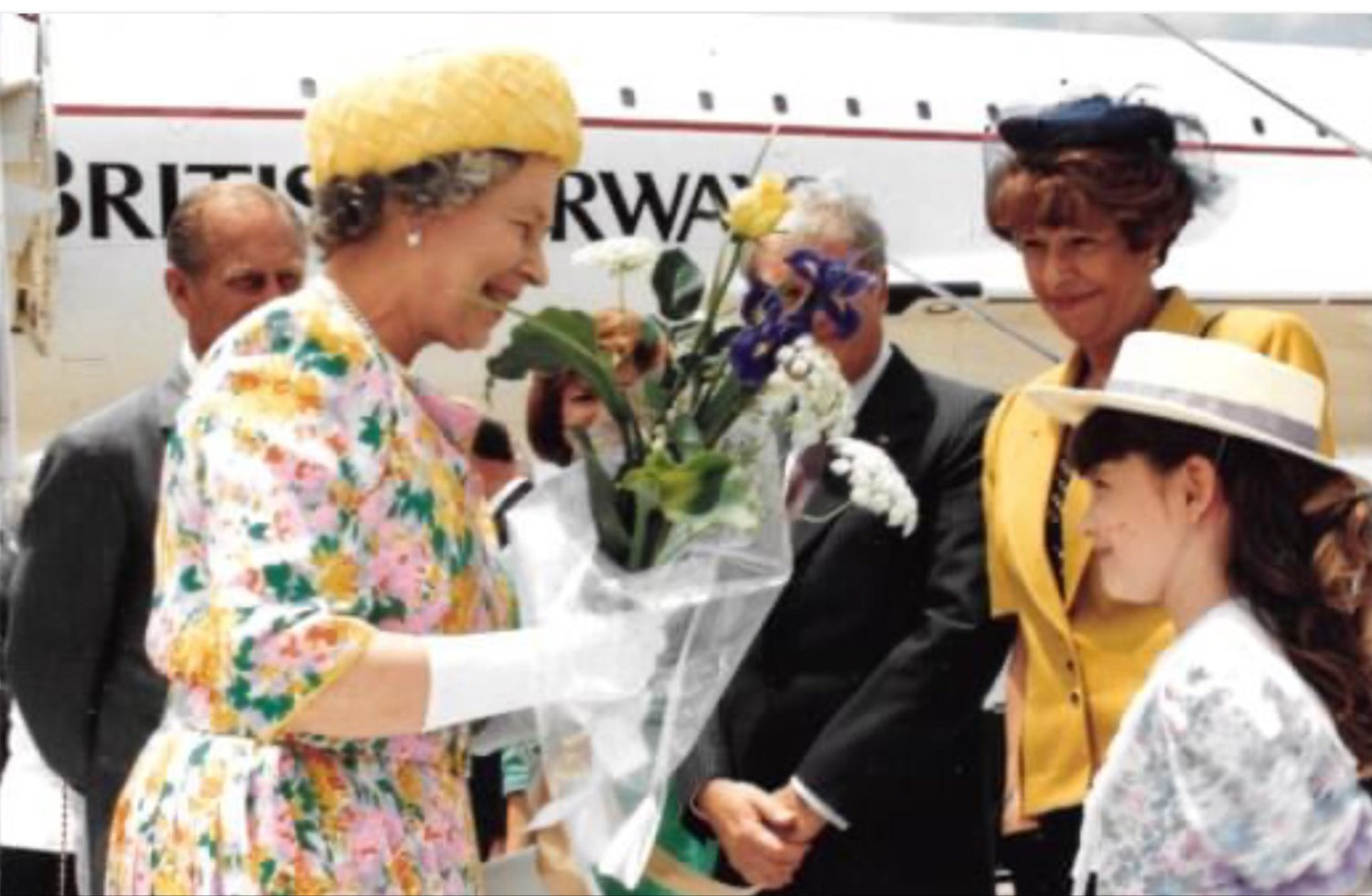 Nine-year-old Loren Ellison, who was born in Gonzales, greets Queen Elizabeth II with flowers at Bergstrom Air Force Base in Austin during the royal's May 1991 visit.
Contributed/Loren Ellison Steves 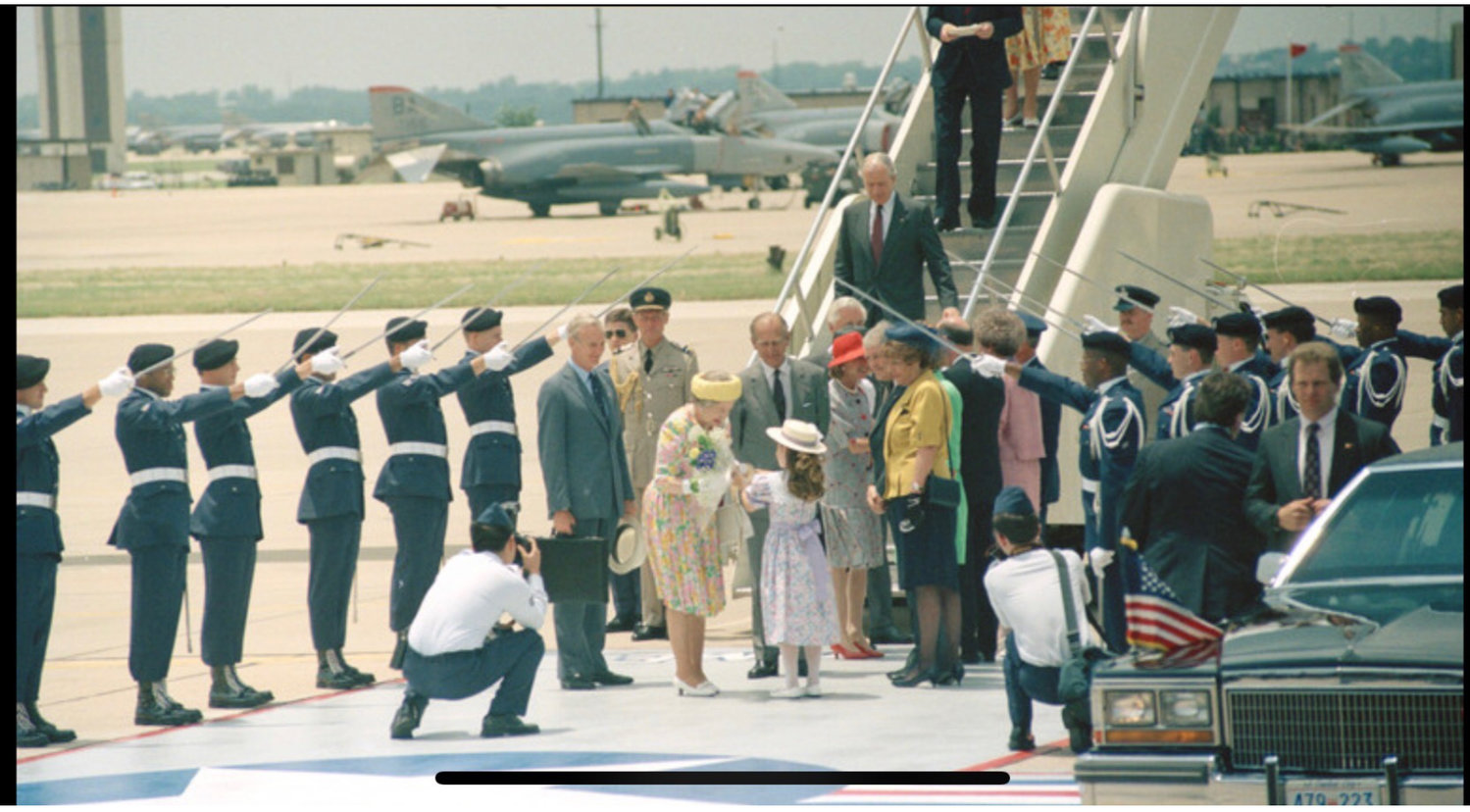 As the world mourns the passing of the only Queen of England most people have ever known, among them is a woman with ties to Gonzales who was perhaps the first person to greet the monarch when Elizabeth II famously came to Texas some 31 years ago.

Loren Ellison Steves was just nine years old in May 1991 when she was asked by her uncle, Lee Cooke — then the mayor of Austin — to present the Queen with flowers after the royal entourage landed at what was then Bergstrom Air Force Base in Austin.

Steves was born in Gonzales, as was most of her family, and her father, Wayne Ellison, was the Gonzales Chamber of Commerce & Agriculture executive director.

In 1991, she was an elementary student in New Braunfels who was about to have the best excuse in the world to skip school for the day.

“I remember being out to dinner with my family when (Cooke) mentioned that pending visit and how he was looking for, specifically, a 9 year old girl with brown hair and brown eyes to accompany him and my Aunt, Barbara Vackar, on very special mission,” Steves said. “Naturally, I was incredibly excited that I just so happened to fit such a description but I don’t think the totality of the day hit me unit l was much older. I was just excited to have a really good excuse to leave school early.”

When the big day arrived, Steves said she remembered being “enthralled with the pomp and circumstance of the day” and then her Uncle Lee and Aunt Barbara took her away from her parents and her older brother, Willis, to go wait in a building near the tarmac for the Queen’s arrival.

“Here is where I was to practice my one line ‘Welcome to Austin your Majesty’ and curtsey, taking extra care to hand off the flowers in between her arms without touching her, as was protocol, with a bodyguard and handler,” Steves said. “My aunt Barbara was with me and knew me as a very shy child, back then, so I could tell she was worried that I might freeze when the time came.”

A short time later, a very large British Airways Concorde jet landed at the base and Queen Elizabeth II, in all of her royal majesty, exited the plane. It was Steves’ big moment, her own Queen’s gambit, so to speak. Would nerves get the best of her?

“I nailed the greeting as rehearsed,” she recalled. “Looking back a video footage of the event, I could tell that I rose to the occasion in front of the Queen, but was a bit clueless as to who the tall guy behind her was that kept smiling at me. Prince Philip did indeed seem 10 feet tall next to my small stature and, in my opinion, was built more like a Texan than a Brit.”

And just like that, Steves’ audience with royalty ended, as the rest of the day was “full of motorcades, speeches and Capitol tours where friends of my aunt and uncle, like Anne Richards, Cathy Bonner, and LaVada Jackson, hosted the royal couple,” she recalled.

Queen Elizabeth II and Prince Philip spent nearly two weeks in the United States and reportedly enjoyed their stay in Texas very much. The Lone Star State equally was enamored with the First Couple of England.

Three decades later, Steves is married and works in Austin as a Realtor and apartment locator with the both aptly and ironically named Crown Realty, but she cherishes the memory of the time she actually met “The Crown.”

“I am honored to have played a small role in the once-in-a-lifetime royal trip to Texas and mourn, along with so many others, the loss of such a noble and graceful monarch,” she said.