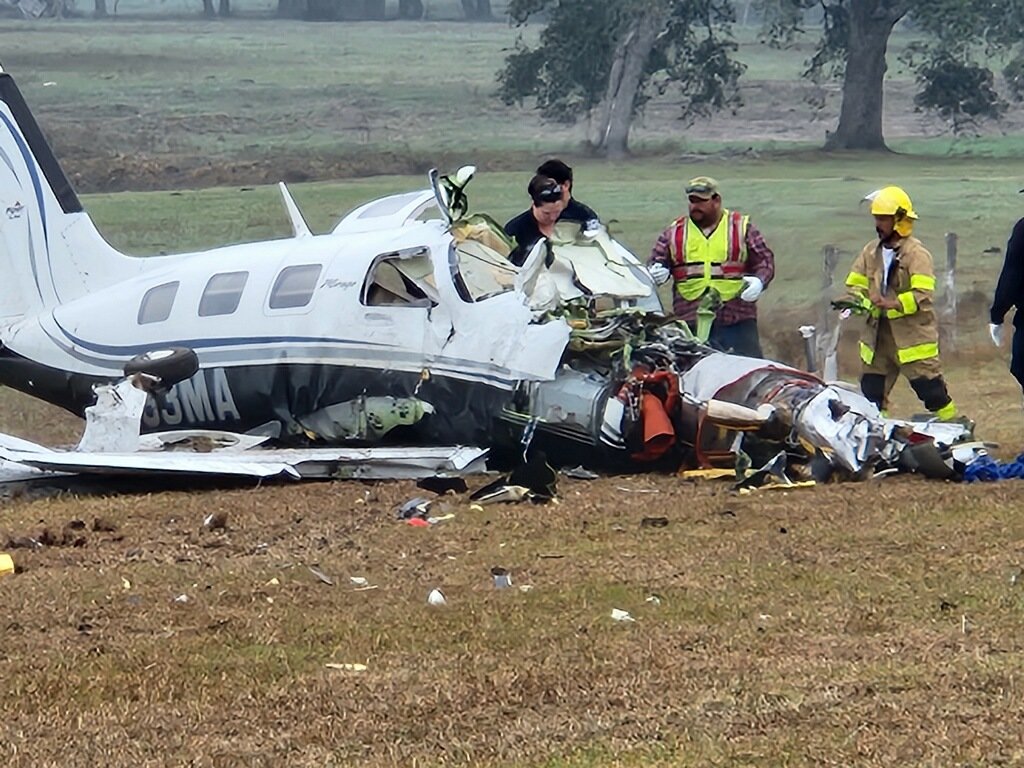 Four people were killed and another person was injured when a single-engine plane crashed near the intersection of FM 317 and County Road 462 near Yoakum late Tuesday morning.
Nadine Rex
Posted Wednesday, January 18, 2023 11:58 am
By BOBBY HORECKA, Special to the Inquirer

Four of the five people aboard a single propeller aircraft that had radioed in it was about to land on a scheduled flight to the Yoakum Regional Airport were confirmed dead after the plane went down just a few miles northeast of its intended destination Tuesday morning, officials said.

"We can confirm that there were five people on board the aircraft and that and four of those people are now deceased," Lavaca County Sheriff Micah Harmon reported that afternoon, having been on scene for close to four hours at that point.

"We have several agencies here on scene assisting us in securing the scene, but we won't be able to say much of anything or do much else until the feds arrive."

By feds, Sheriff Harmon was referring to investigators from the Federal Aviation Administration (FAA) and the National Transportation Safety Board (NTSB), who had been called in to survey the damage and try to determine its cause, said Sgt. Rueben San Miguel, public information officer for the Victoria regional office of the Texas Department of Public Safety.

"Our main function here is to secure the scene until they arrive, and that could take several more hours still," he said.

He also confirmed the number of passengers and the four fatalities, adding that the lone survivor from the crash managed to crawl free of the wreckage, where he was later found by first responders and rushed to Citizens Medical Center in Victoria, where he was listed in stable condition at about 2:30 p.m. Tuesday afternoon.

Sgt. San Miguel said that the pilot had radioed ahead to Yoakum Regional, telling the tower that they would be landing soon on a scheduled flight to that location.

Nothing in that communication stood out as troublesome or indicated that were having any sort of trouble, and no additional radio traffic or distress calls were received.

Rather than make that landing as intended, San Miguel said "something caused the plane to crash and it is not evident what that is at this time."

Based those time log reports, San Miguel said the believe the plane went down at about 10:50 a.m. Tuesday, Jan. 17.

According to computer call logs at Yoakum EMS the first reported 911 call on the crash was received at 10:47 a.m.

Wreckage from the crash was found in a field just a few miles northeast of the plane's intended destination at the Yoakum Regional Airport. Aboard were members of Harvest Church, located in Germantown, Tenn., a suburb of Memphis.

The church identified the four people killed as Bill Garner, the church’s executive vice president; Steve Tucker, a church elder; and Tyler Patterson and Tyler Springer. Lead pastor Kennon Vaughan was able to get out of the plane and was transported to a hospital in Victoria. His condition is unknown at this time.

Although largely intact, bits of the plane's hull were scattered across a field not far from the intersection of  FM 317 and County Road 462, a few miles outside the city limits of Yoakum.

Given that no obvious cause for the crash could be identified, teams from the FAA and NTSB likely will have to reconstruct the flight data and review each mechanical and structural component of the plane to determine what exactly caused the crash, San Miguel said.

Two Lavaca County Justices of the Peace were on scene assisting, including Precinct 4's Hallie Hall out of Yoakum and Precinct 3's Mark Yackel from Shiner.

Although skies had largely cleared by Tuesday afternoon, a thick milky white fog and heavy mist clung to the area earlier in the day, from before sunrise to as late as 9:45 that morning.