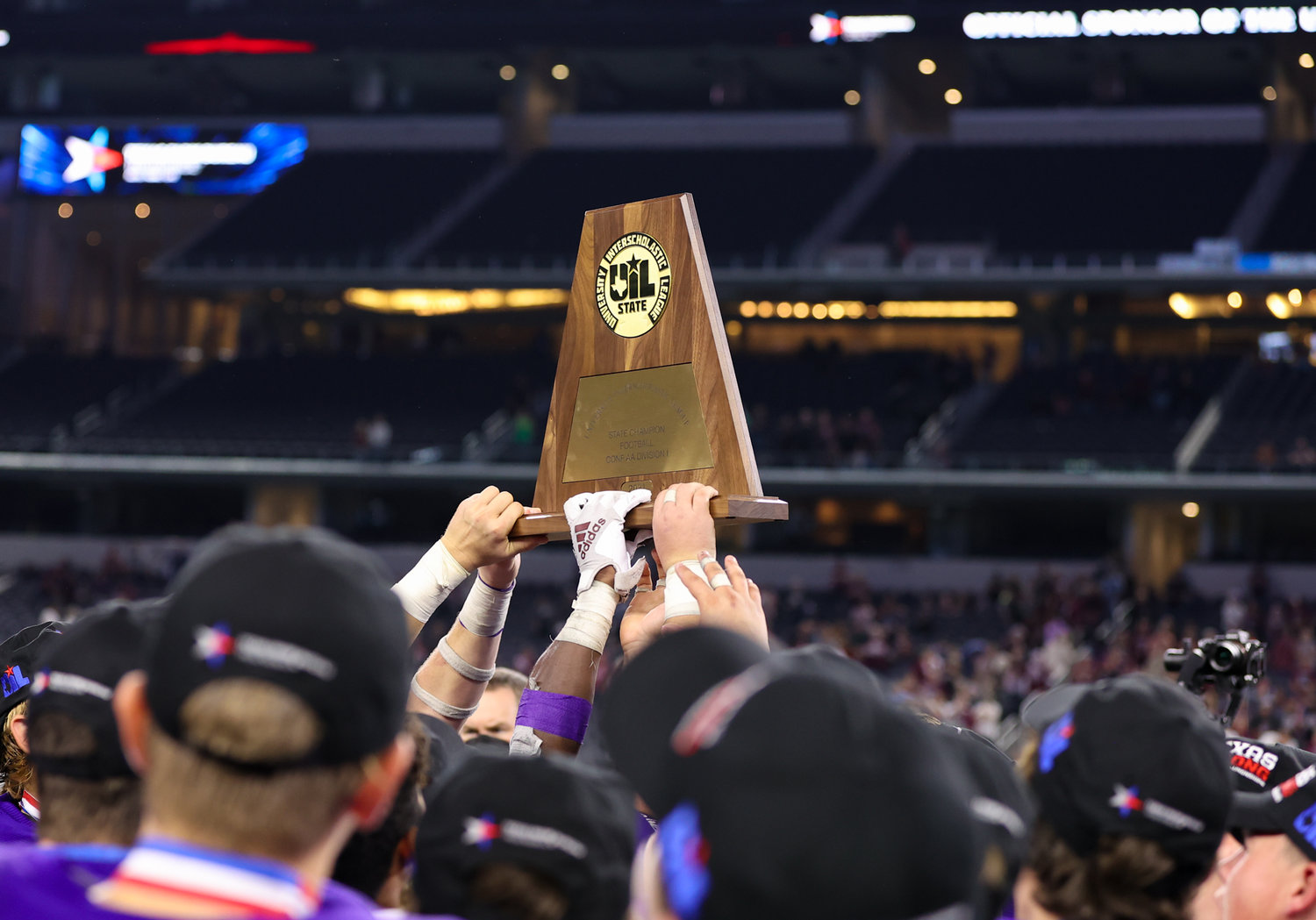 The Shiner Comanches hold up the Class 2A Division I state championship trophy after a 47-12 win over Hawley on December 15, 2021 in Arlington, Texas.
Scott W. Coleman 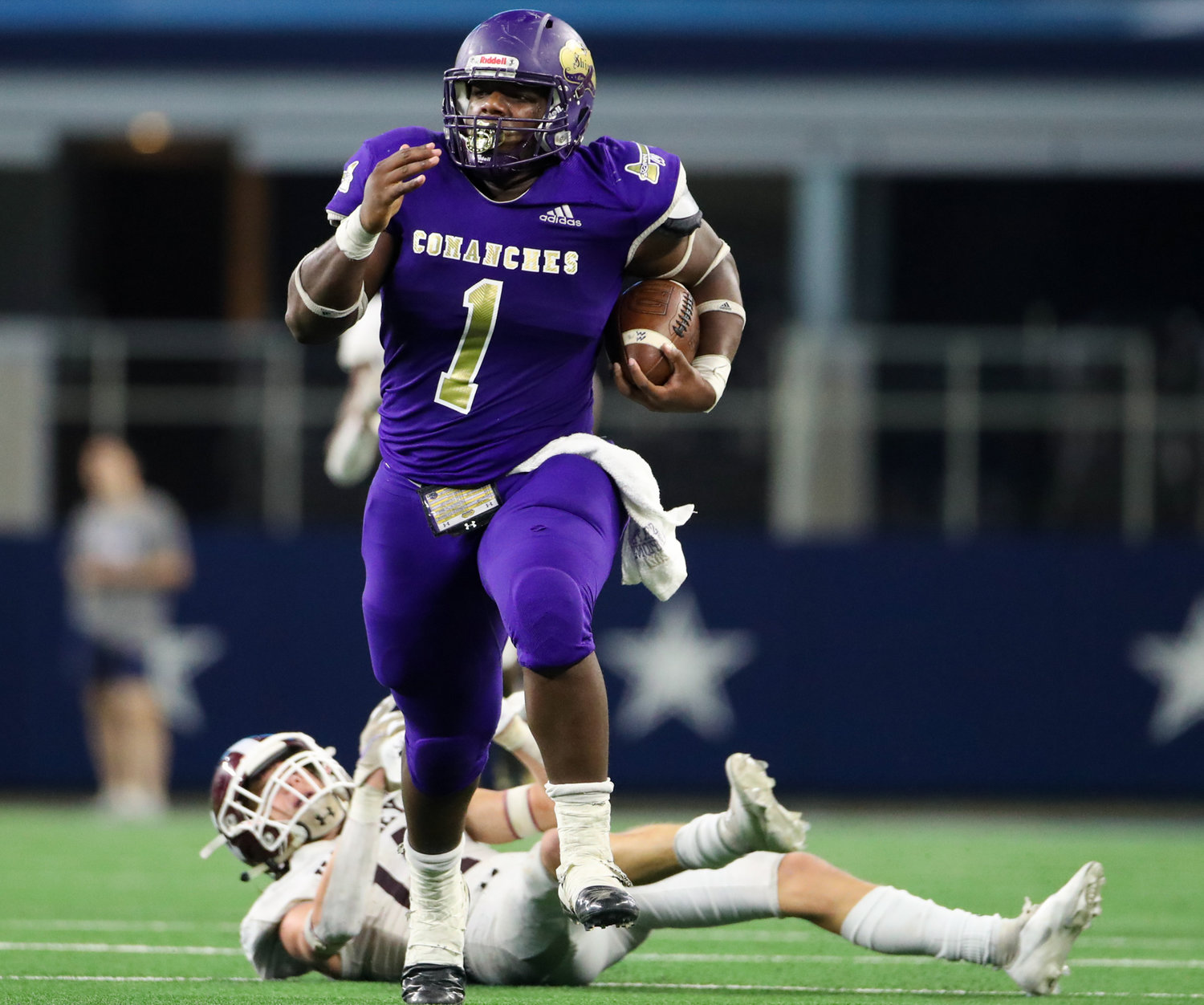 Shiner Comanches senior Doug Brooks (1) carries the ball on a 79-yard run during the fourth quarter of the Class 2A Division I state football championship game between Shiner and Hawley on December 15, 2021 in Arlington, Texas.
Scott W. Coleman 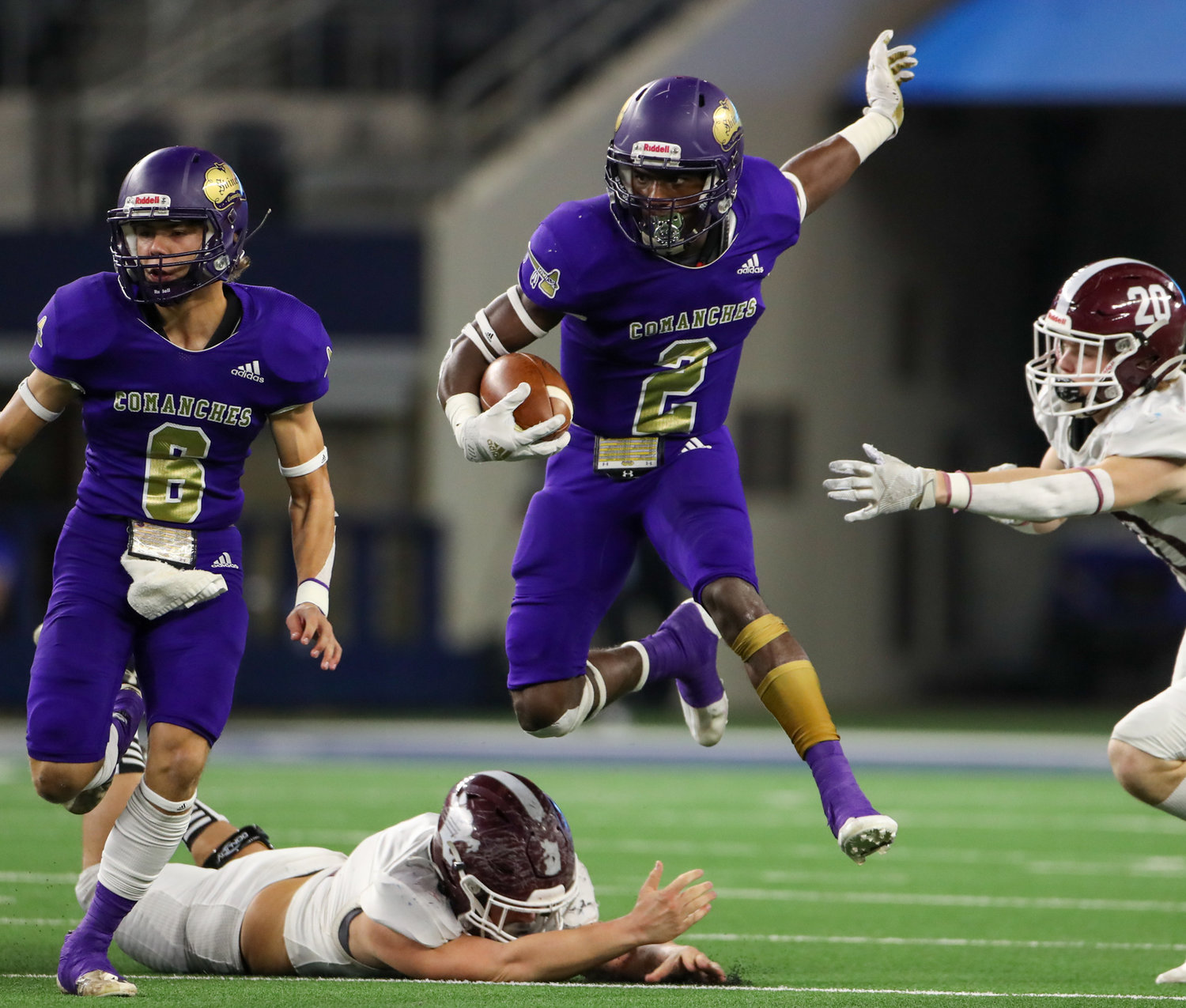 Shiner Comanches junior Dalton Brooks (2) hurdles a defender during the Class 2A Division I state football championship game between Shiner and Hawley on December 15, 2021 in Arlington, Texas.
Scott W. Coleman 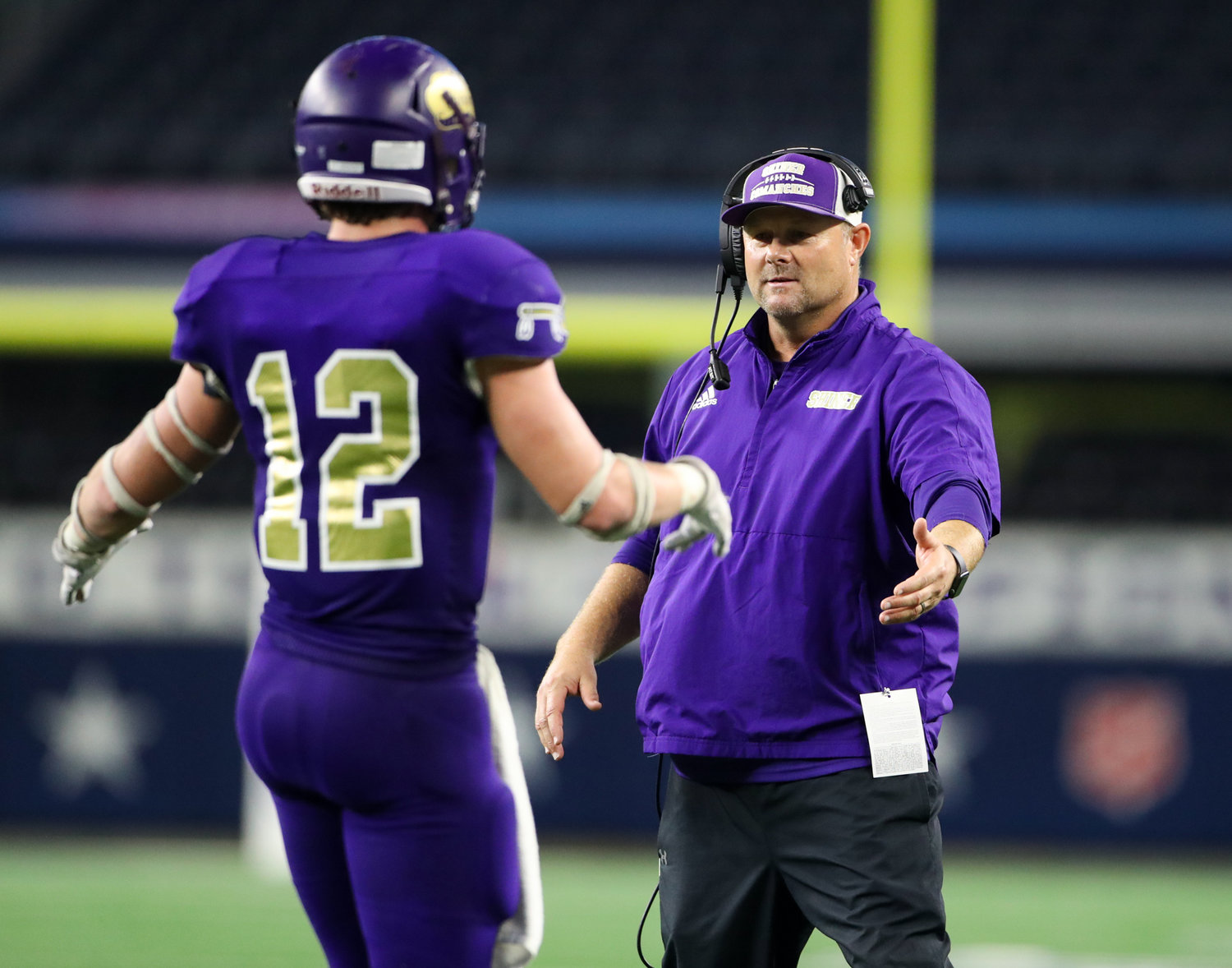 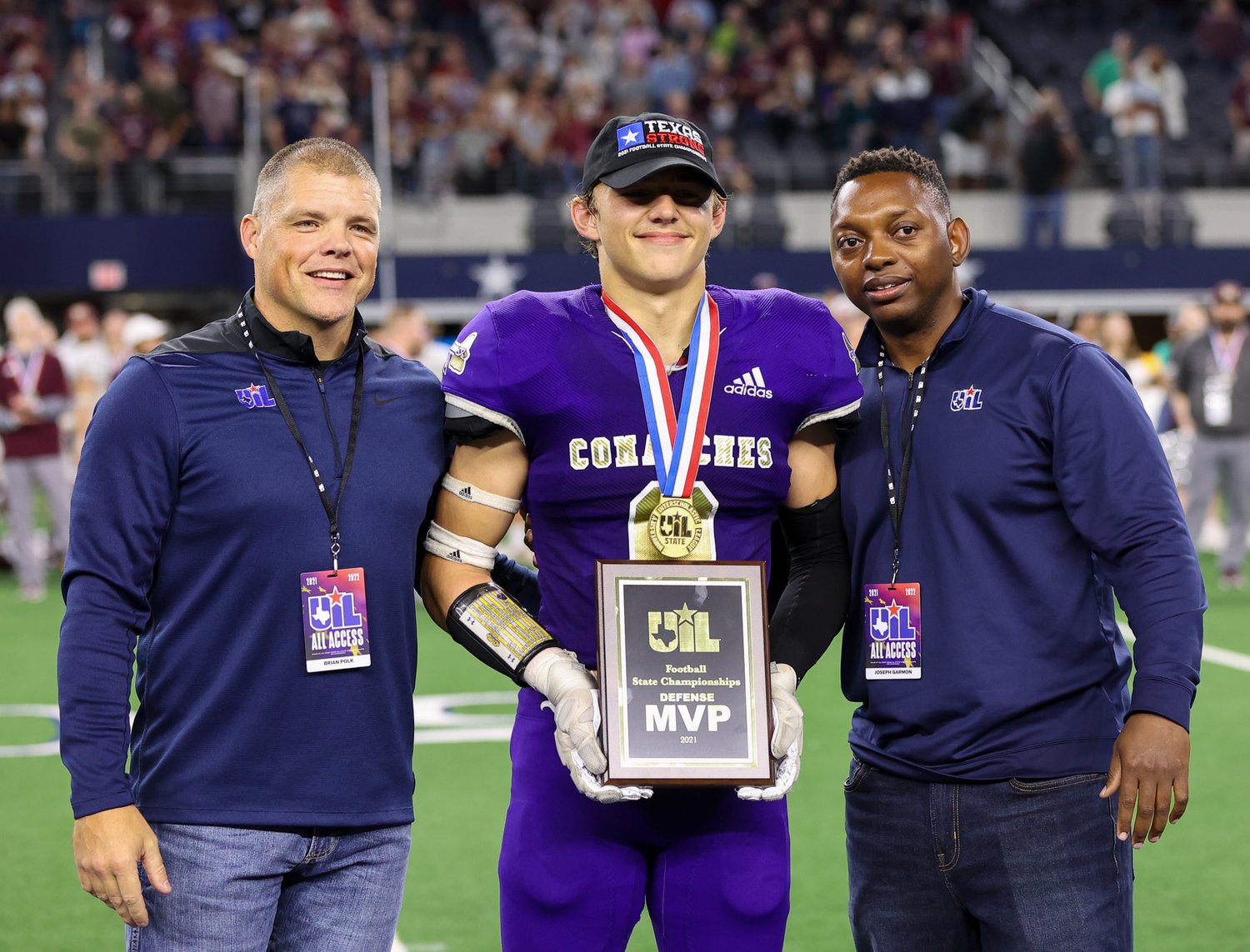 Shiner’s Brooks brothers suited up, showed up and shelled out a shellacking on the Hawley Bearcats on Wednesday, Dec. 15, as the Comanches won their second-staight Class 2A Division I championship with a 47-12 romp at AT&T Stadium in Arlington.

Senior running back Doug Brooks, who would be named the Offensive MVP of the game, scored two touchdowns and gained 210 yards on just 16 carries, while junior Dalton Brooks ran for 194 yards on 31 carries with three touchdowns.

Dalton Brooks also caught three passes for 63 yards and Doug Brooks caught one for 11 yards. Altogether, the Brooks brothers accounted for 404 of Shiner’s 419 rushing yards, 74 of their 110 receiving yards and five of their seven total touchdowns.

Quarterback Drew Wenske completed 6-of-7 passes for 110 yards and a 22-yard touchdown strike to Tyler Bishop, who caught two passes for 36 yards. Wenske threw one interception in the game and rushed for 10 yards on three carries. Makylin Burchell had one run for a seven-yard TD late in the game.

On defense, the Comanches picked off Hawley quarterback Rodney Hooper three times in the game — all in the third quarter — and the Shiner offense converted two of those turnovers into touchdowns once they got the ball back to break open a 21-12 game.

Eli Fric was named the Defensive MVP of the game with five tackles (four solo), including two for loss, an interception he returned 16 yards and a pass breakup. Bech Bishop had seven tackles (five solo) including one for a loss. Dalton Brooks and Ryan Peterson each had an interception and Kennan Hailey had a sack.

Shiner took the opening kickoff and drove 59 yards in seven plays to strike first. Dalton Brooks ran it in from three yards out and the PAT made it 7-0. Hawley would come back on its second possession of the game after recovering a Comanche fumble at the Shiner 49. On the next play, the Bearcats’ Diontay Ramon raced 49 yards for a score, but Shiner blocked the PAT kick, leaving the score 7-6 with 2:01 left in the first quarter.

Shiner then marched the ball down the field 76 yards in nine plays, capping it off with an 11-yard Dalton Brooks run. A successful PAT kick by Peterson made it 14-6 with 10:07 to play in the first half. Hawley would score again on its next possession as they drove 56 yards in five plays. Will Scott caught a four-yard TD pass from Hooper, whose two-point pass attempt failed, making the score 14-12 with 8:24 to play in the second quarter.

The Comanches would score one last time before the half. With 34 seconds left, Doug Brooks scored on a 26-yard run, capping a three-play, 53-yard drive. The PAT kick made it 21-12 at the half.

In the third quarter, Peterson intercepted a Hooper pass on the second play of the quarter at the visitors’ 40 and returned it to their 33. Shiner would punch the ball in eight plays later with Dalton Brooks’ third TD run, this one from 10 yards out. The PAT kick made it 28-12 with 7:11 left in the third.

Hawley’s next possession lasted five plays before Dalton Brooks intercepted a Hooper pass at the Shiner 22. The Comanches would drive the ball to the Bearcat 40 before Wenske made his only miscue — throwing an interception of his own on a long ball that Kason O’Shields picked off at his 8 and returned to the Hawley 23.

The Comanches would get their revenge on the very next drive as Fric picked off Hooper at the Hawley 38 and ran it back 16 yards to the Hawley 22. Shiner then drove six plays in 22 yards and Doug Brooks capped it off with a one-yard TD plunge with 11:11 to play in the game. The PAT kick was blocked, making it 34-12.

Shiner would force Hawley into a turnover on downs when they failed to get a first down on fourth and 1 at their own 24. On third and 7 from the Bearcat 22, Hawley hit Bishop for a TD pass with 7:52 to play in the game. The PAT kick failed, making it 40-12.

Hawley again was stopped from making a first down on their next possession and punted the ball away to the Comanches, who got the ball at their own 8. On the next play, Doug Brooks bulldozed his way to a 79-yard run that moved the ball to the Bearcat 13 before he was tackled. Three plays later, Burchell scored from seven yards out and the PAT kick closed out the scoring at 47-12.