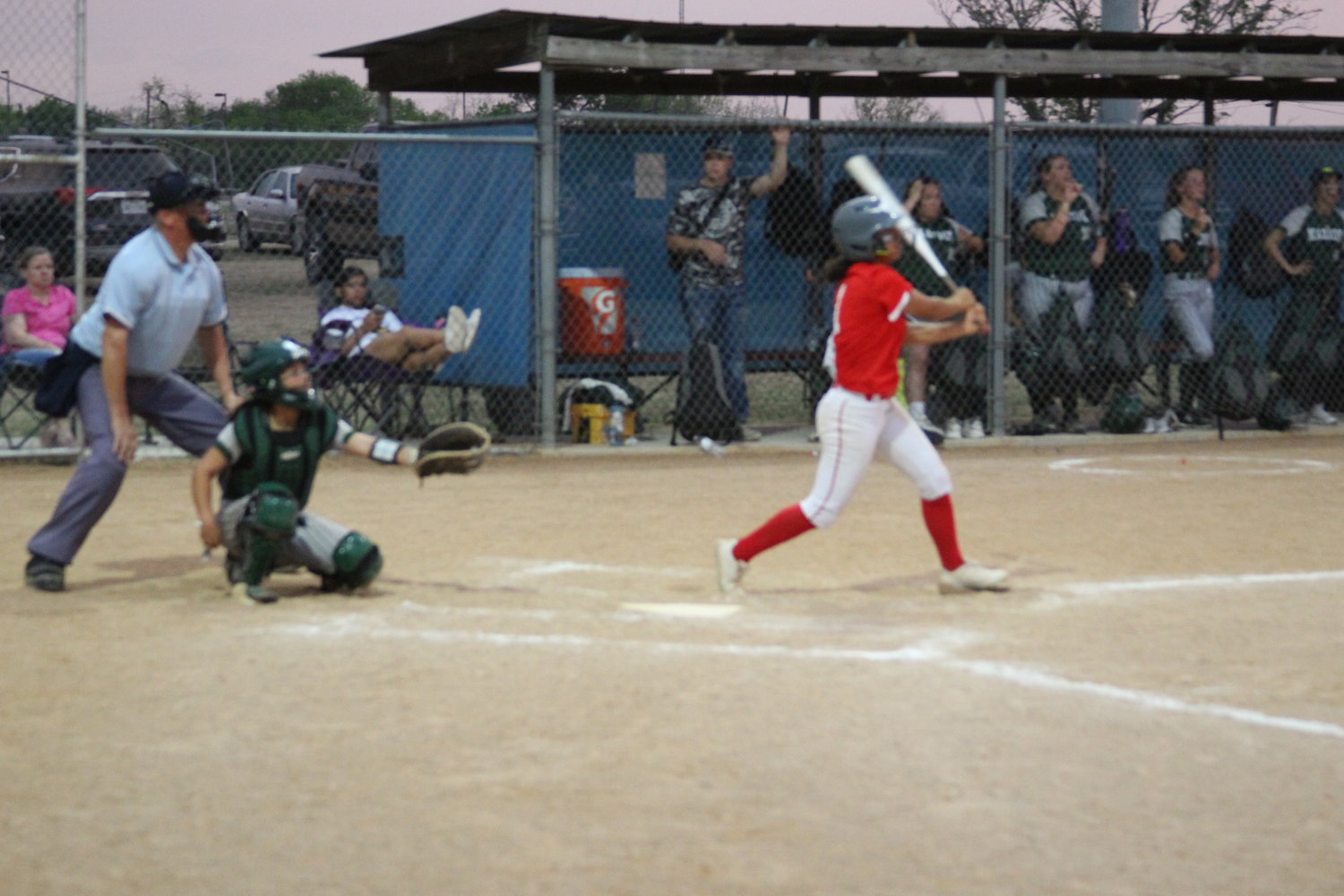 TWO-OUT THUNDER – Mady Velasquez ties up the game with a two-run blast to right field. Velasquez had two home runs, four RBI and was the winning pitcher in Tuesday night’s 13-12 victory over Marion.
Louis Decker 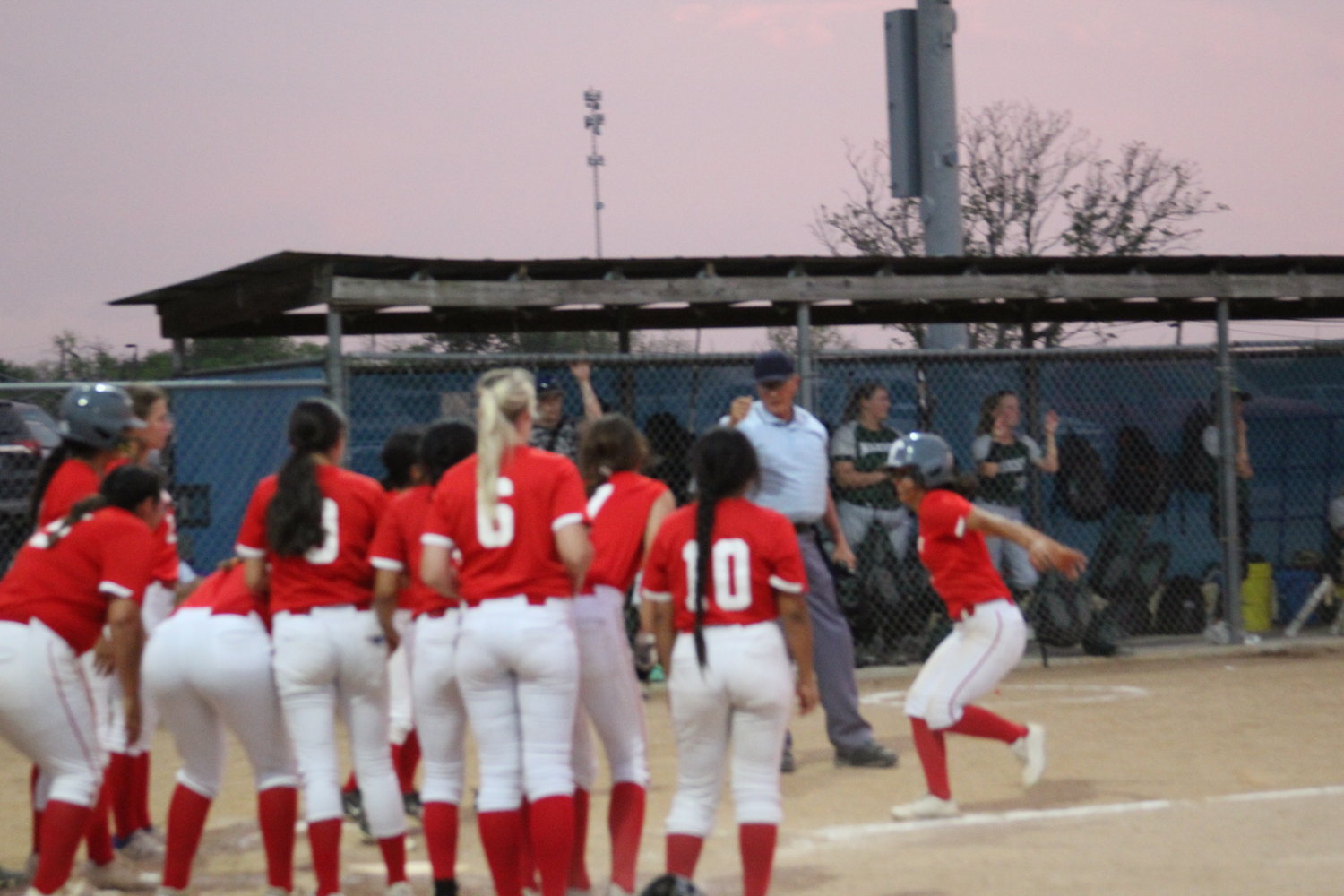 The third time was the charm, though, as the Lady Mustangs scored three times in the bottom of the seventh inning to earn a 13-12 victory in a pivotal District 26-3A matchup.

The win improves the Lady Mustangs to 4-1 in district play and keeps them in sole possession of second place, while Marion falls into a third-place tie with Randolph at 2-3.

The Lady Bulldogs fired out of the gates in the top of the first inning, scoring two runs to take the early advantage. The Lady Mustangs answered back in the bottom of the frame with a two-out RBI single by Kendall Amaya to plate Hailee Houseton who walked to start the inning.

Amaya was unable to find success in stopping the Lady Bulldog lineup, hampered by the umpire’s tight strike zone and some fielding issues by her defense. Amaya failed to get out of the second inning after giving three more runs to Marion. She was replaced in the circle by Mady Velasquez, who was able to escape the jam with a key strikeout.

In the bottom of the second, the Lady ‘Stangs mounted their first comeback of the game. H. Houseton was able to slice into the Marion lead, sending a ground ball past the lunging third baseman for a two-run triple. Velasquez then tied the game with a two-out, two-run home run just to the left of the scoreboard in right field.

“Two-out thunder” was the theme for the Lady Mustangs on the night as seven of their runs came with two outs, including the third inning when Natalee Mendez drove a ball to deep right center field that bounced off the center fielder’s glove to drive in Greenlee Houseton and give Nixon-Smiley its first lead of the game, 6-5.

Marion answered back in the top of the fourth with a pair of runs to reclaim the lead. The Lady Mustangs had difficulty handling the Lady Bulldogs’ top of the order – Jaslyne Williams, Breyana Gonzales and Alyssa Robles. Williams and Robles had key hits in the fourth that helped Marion jump back in front.

The lead was short-lived, though, as the Lady ‘Stangs scored three in the bottom of the fourth, highlighted by another Velasquez two-run homer in nearly the exact same spot in right field, to move back in front, 9-7. Williams, who started the game for Marion, was taken out and Robles came on in relief. Robles was able to escape the inning and held Nixon-Smiley in check most of the next two innings.

The teams traded runs in the next two innings – Marion scoring a run in the top of the fifth and Nixon-Smiley scoring what seemed to be an insurance run on a G. Houseton single in the bottom of the sixth – to set up a wild finish.

With the Lady ‘Stangs clinging to a 10-8 lead, the Lady Bulldogs plated four runs in the top of the seventh. Taking advantage of the small strike zone, the Marion hitters were content to take borderline pitches and draw walks. The big hit of the inning was off the bat of Gonzales, who had a two-run single to give Marion the lead. A bases-loaded walk to Kylie Balderas brought in the final run, but Velasquez finished her 5 2/3 innings of relief work with two big outs to keep the Lady Mustangs within striking distance.

Mendez stepped in to lead off the bottom half of the seventh inning and quickly cut the deficit in half with a blast to left center field that cleared the fence and brought the crowd to its feet. The Lady Mustangs then began working the count as Robles had difficulty finding the strike zone. A passed ball allowed Haven Davis to score the tying run and a bases-loaded walk to G. Houseton brought home Granados with the game-winning run – another two-out RBI.

Both teams had success at the plate – the Lady Mustangs had 11 hits on the night to go with nine walks, while Marion had eight hits and 12 walks. Velasquez was 2-for-3 on the night with the two homers and four RBI. Mendez went 2-for-4 at the plate with a double, a home run and two RBI, and G. Houseton had a 2-for-3 performance with three RBI. H. Houseton, Granados, Amaya, Carlee Cano and Mary Kate Garcia each had a hit in the game.

Amaya started the game, working only 1 1/3 innings and giving up five runs on five hits. Velasquez came on in relief to close out the game and earn the win, giving up seven runs on three hits with 10 strikeouts.

The Lady Mustangs will close out the first half of District 26-3A play on Friday night in Stockdale, beginning at 6pm.

The Luling Lady Eagles are taking the mantra “win the ones that matter” to heart as they won only their fifth game of the season, but their fourth in district play, 12-2, over Nixon-Smiley on Friday night in Luling.

Both Luling and Nixon-Smiley came into the contest with identical 3-0 district records, but it was the Lady Eagles who proved to be the better team on this night as they had 11 hits, including a home run, while limiting the Lady Mustangs to only three hits on the night.

Mady Velasquez, Greenlee Houseton and Kendall Amaya each went 1-for-3 to account for the only hits for the Lady Mustangs. Velasquez and Carlee Cano drove in the runs, scored by Hailee Houseton and Mary Kate Garcia.

Amaya started in the circle and worked 3-plus innings before being relieved by Velasquez, who worked the final 2 2/3 innings. Amaya surrendered eight runs on eight hits, walked two and struck out two. Velaquez gave up four runs on three hits, walked six and struck out five.

The Lady Mustangs fell to second place with the loss, but remain in the playoff chase.