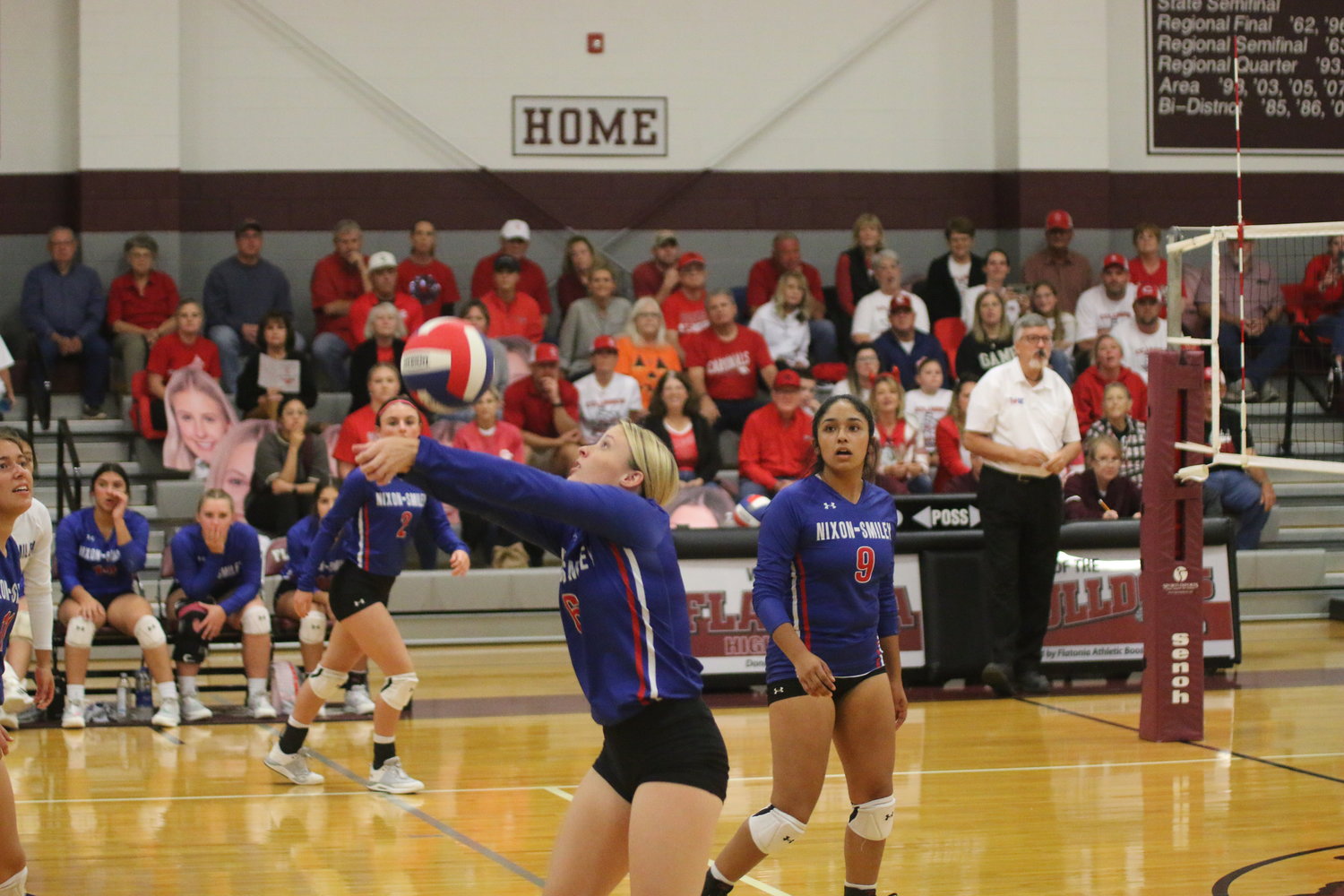 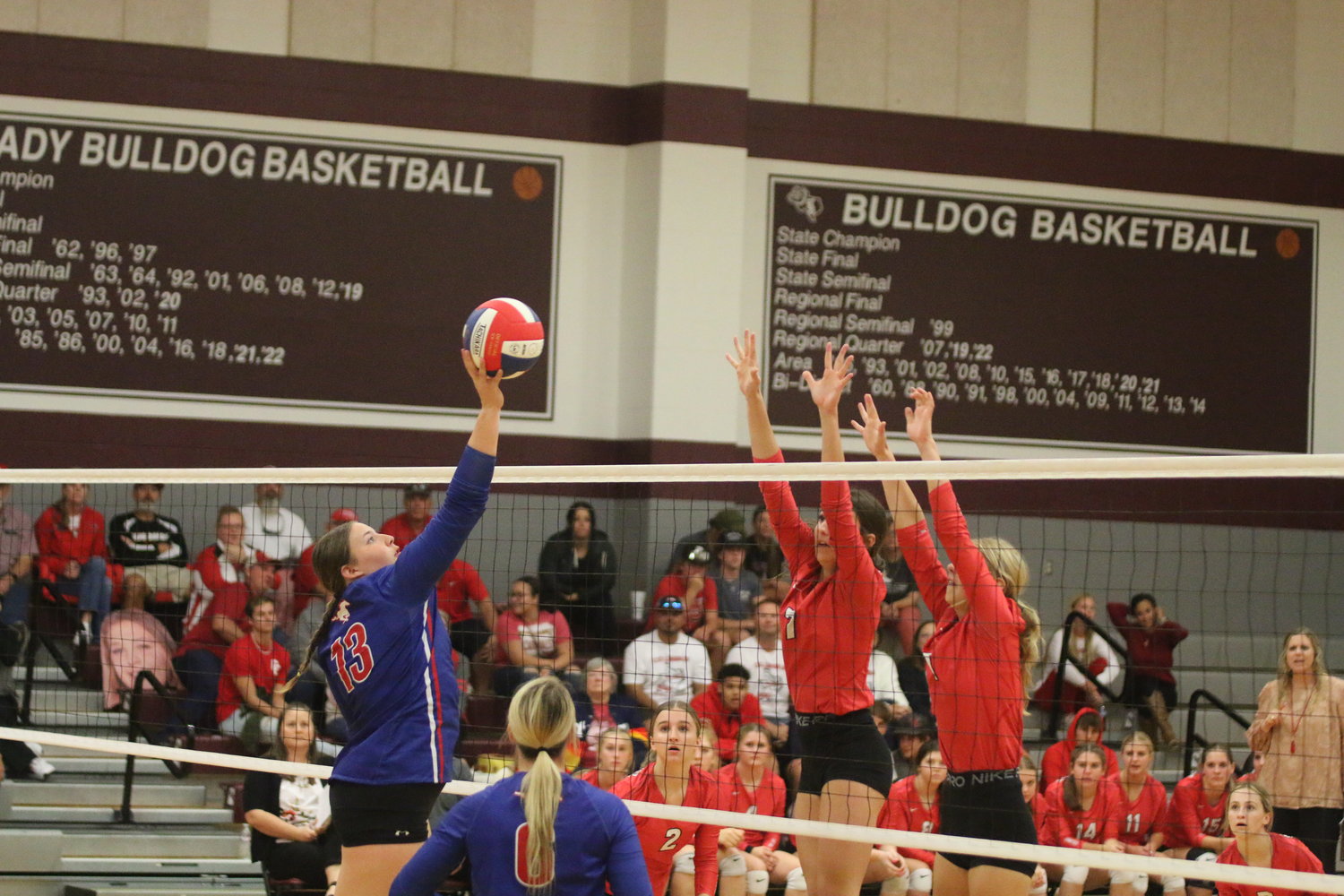 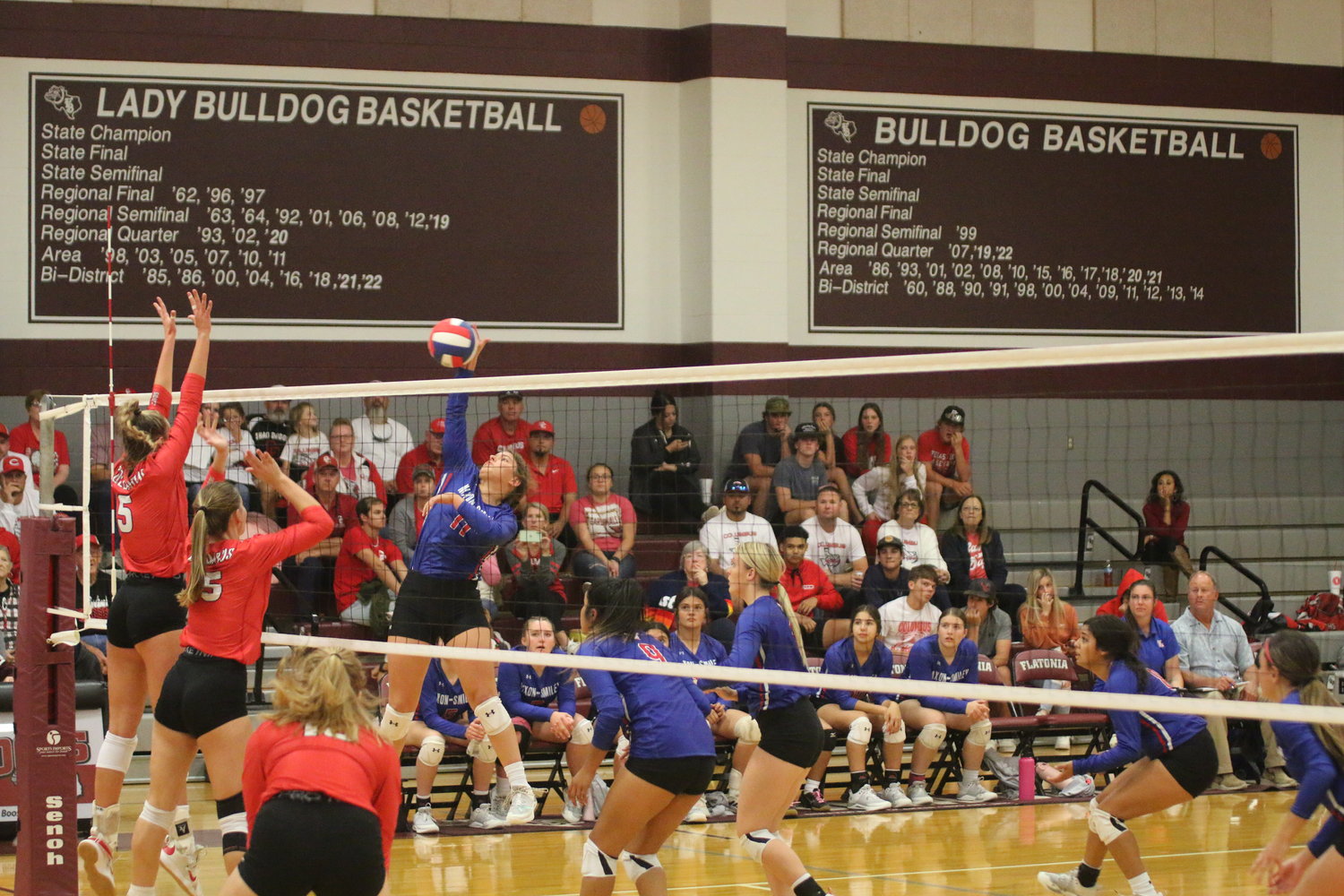 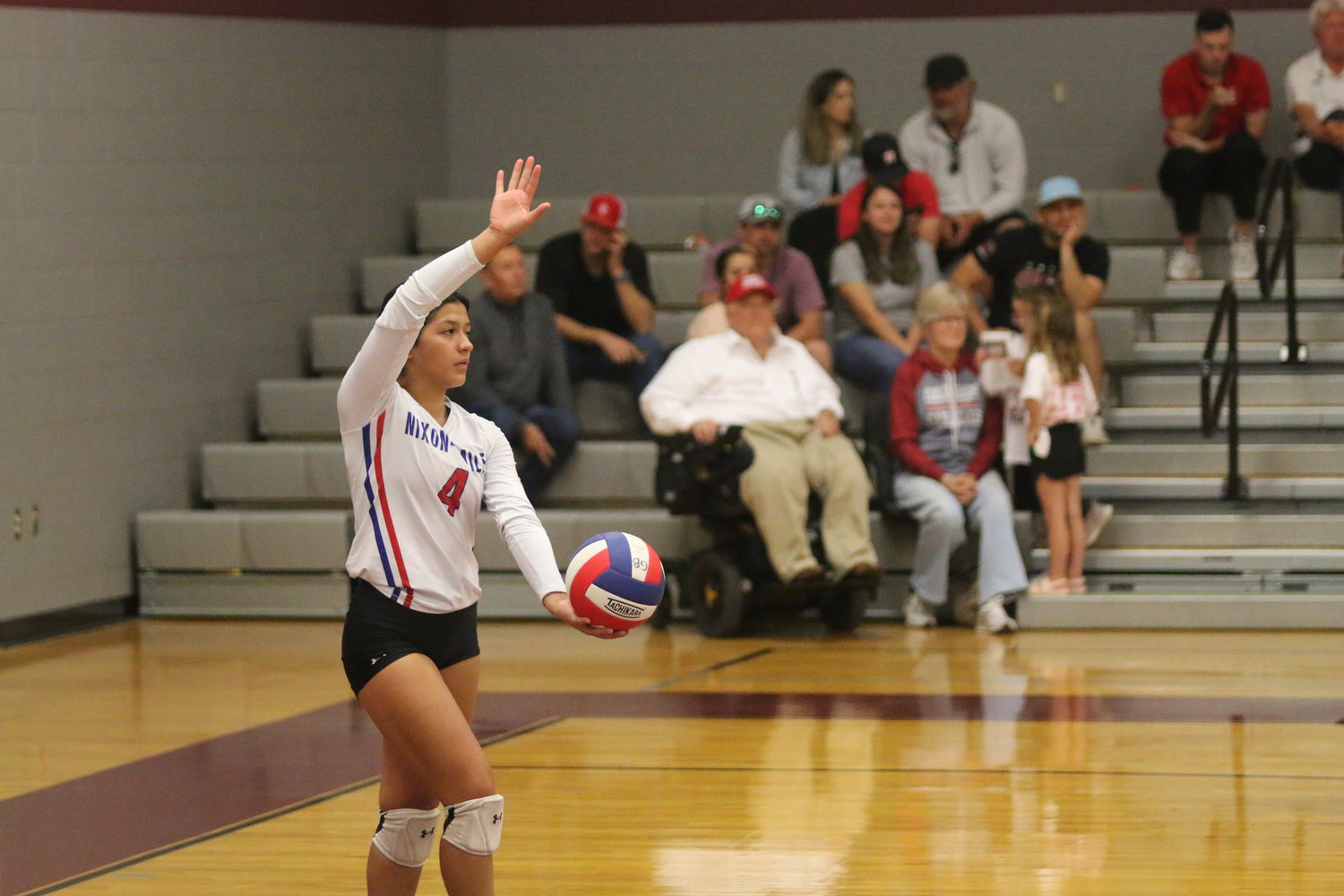 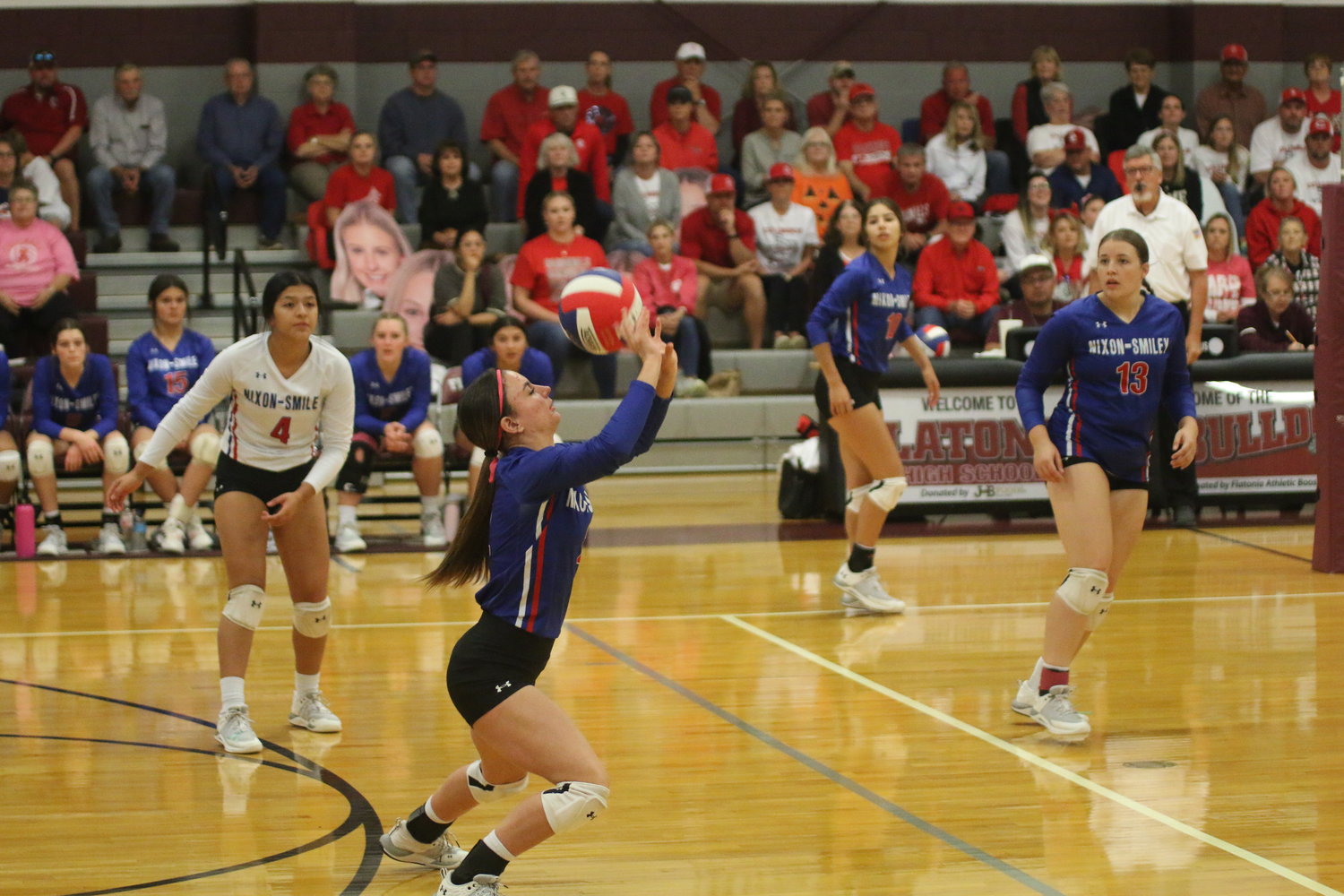 Any thought Nixon-Smiley may have had of pulling off the Cinderella upset against No. 3-ranked Columbus in Monday’s bi-district playoff match at Flatonia faded within less than an hour after the Lady Mustangs took the court.

Tribe, who last month verbally committed to play volleyball for University of Texas at San Antonio, was a force in all assets of the game, from serving to blocking to her specialty — spiking.

Coming into the match with 655 kills on the season, Tribe added to that total with another 20 or more in Monday’s match, each with the ferocity one would expect from a veteran collegian. She also had one serving stretch in the third game where she accounted for six straight points, including three aces.

Backing up Tribe but not playing second fiddle was fellow junior Ember Mandola, who teamed up with Tribe on a number of successful blocks while also displaying an innate ability to be in the right place at the right time to keep volleys alive. Mandola also was strong from the service line and a fearsome killer on the attack.

Nixon-Smiley had a distinctive height disadvantage against their opponents, and Columbus exploited it repeatedly throughout the match, looking every bit the part of the District 25-3A champion which ran through its conference play undefeated.

There were flashes of brilliance from the District 26-3A fourth-place Lady Mustangs as well, who rose to the occasion several times in the second and third sets with inspired play. Unfortunately, they could not string together more than three consecutive points at any one time.

Columbus served first in the first game and quickly jumped out to leads of 7-2 and then 11-3 before a stunned Nixon-Smiley could react. The Lady Mustangs would pull to within 17-8 on an ace by Mary Kate Garcia, but after the Lady Cards regained serve, Mandola served up seven straight points to close out the first game, 25-8.

The Lady Mustangs claimed their first lead of the night at 2-1 in the third set and again at 3-2 behind the play of Haven Davis, Kendall Amaya, Madisyn Rice and Deanna Amaya, but Tribe and the Lady Cards took back control of the match. After taking the lead at 5-4, Tribe went to the service line and won six straight to make it 11-4. A mini-run by the Lady Mustangs pulled them to within five at 12-7 after a Kendall Amaya ace, but Columbus’ smallest player, freshman Caylie Neisner, served up six straight after a side out and pushed the lead back to 19-7.

The Lady Mustangs would score their last point when drawing to within 11 at 21-10 and then Columbus closed out the match and Nixon-Smiley’s season with four straight points.