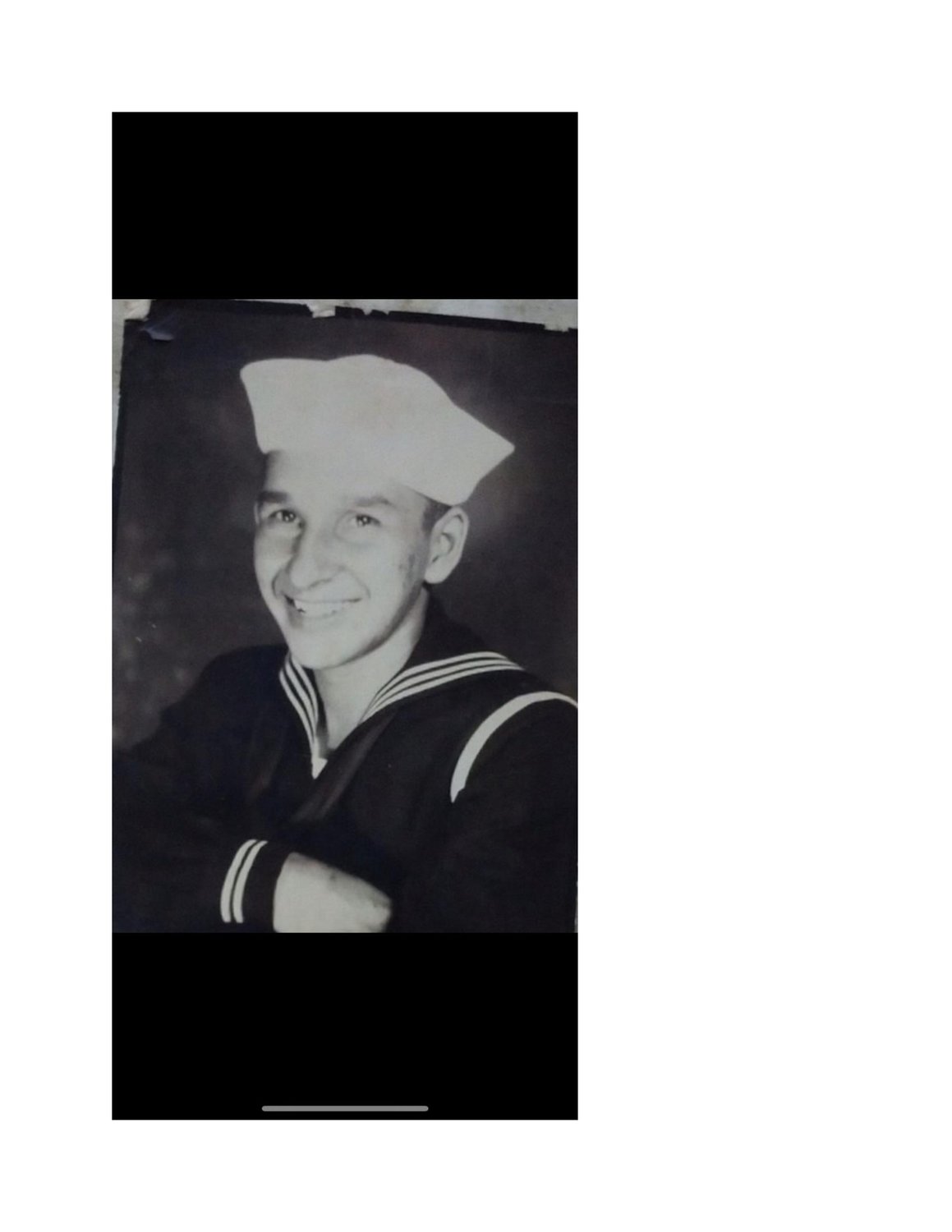 A grateful nephew remembers.  A World War II veteran was laid to rest at Guadalupe Cemetery in Hochheim, Texas on October 19, 2021 at the age of 98.  Joe Rivera was a member of “the greatest generation” in American history. Having survived the Great Depression, World War II and the Polio epidemic, he was the Fourth of 4 brothers who answered the call after the Japanese bombed Pearl Harbor, December 7, 1941.  He was 19 years old when he entered service in the United States Navy.  His other three brothers, Audelio, Patricio and Luis Rivera were already serving in the United States Army in Europe and the Pacific Theater. All of them were South Texas farm boys living a normal farm and ranching life with their family.  By God’s grace, and to my grandmother’s answered prayers,  all of them returned home honorably without injury.  When they returned home from their tour of war, each was happy they survived the horrific conflict.  Joe Rivera, “Uncle Joe,” was no different than his brothers who went before him.  While I am sure that Uncle Joe had many stories to tell of his experience in the war, he carried his battle scars with him his entire life, never wanting to discuss his experience in the war.  Joe Rivera served on the USS President Polk in the Pacific Theater of Operations.  The USS President Polk was a transport ship for U.S. Marines and cargo and also as a standby emergency hospital ship.  Joe Rivera manned his position on that ship and did his duty from the time it left port in California through the end of the war with the Japanese surrender.

Uncle Joe’s first taste of battle would come on November 20, 1943 at the start of the battle for Tarawa, Gilbert Islands. The USS President Polk was to transport approximately 1000 U.S. Marines, from the 2nd Marine Division with supplies and ammunition. As the U.S. war ships entered the Tarawa Lagoon, “General Quarters” (Battle Stations) was announced over the PA system.  Everyone prepared to do their respective duty.  In the predawn hours, the USS President Polk appeared along with 17 transport vessels which would deliver 18,000 Marines and 5 escort carriers, 3 battleships, 4 cruisers, 22 destroyers and 2 minesweepers.  The Japanese opened fire with their 8 inch guns on the American ships and at 0610 the main 16 inch batteries of the USS Battleship Colorado and USS Maryland returned fire along with the destroyers and cruisers silencing the Japanese artillery.   Once the bombardment of Tarawa ended, U.S. Marines began climbing down cargo nets from the USS President Polk and other transport vessels onto the Higgins boats which would ferry them and their weapons onto the assault beaches.  The U.S. Marines encountered problems almost immediately.  As Higgins boats began to stall in the shallow water the U.S. Marines had to jump overboard and wade to shore some 200 to 300 yards, all the while being shot at by the Japanese Infantrymen on the island.  As casualties mounted, the Higgins boats began to ferry the injured back to the USS Polk, which stood by and waited during the battle as a casualty receiving ship.  Uncle Joe and every available sailor on the USS Polk had to become stretcher bearers and get the injured and dying U.S. Marines below deck for the Doctors and corpsmen and then run back up top and receive more injured U.S. Marines for hours.  His first sight of the dead and dying young U.S. Marines, some agonizing in pain no older than he was, must have been a shocking and sobering sight to Uncle Joe.  He did not flinch from his duties, ferrying the injured U.S. Marines to the medical personnel who were becoming overwhelmed by the large amount of casualties coming onto the ship.  When the battle ended, 1,009 U.S. Marines were killed and 2,101 wounded. There would be more battles to fight and the USS President Polk got underway on January 22, 1944 to carry U.S. Marines and cargo to the Battle of Kwjalein.  There, the U.S. 7th Infantry Division lost 144 men, 845 wounded and 190 U.S. Marines lost their lives with 617 wounded, many of which ended up in the USS President Polk which carried the wounded from the battle to San Francisco where Uncle Joe assumed his duties thereon. Next in late July, 1944, carrying troops and cargo to New Caledonia then to Guam where there were over 6 000 wounded and 1,783 U.S. servicemen killed.  The USS President Polk took on the large number of dying and wounded U.S. Marines sailing East at best possible speed to Pearl Harbor then to California with wounded servicemen.  On August 11, 1944, the USS President Polk received Orders to sail to New Guinea with U.S. servicemen and cargo. She then took on U.S. Marines and carried them to the Battle of Leyte and the invasion of Luzon arriving at the Lingayen assault beaches on January 11, 1945. Again, witnessing the bombardment of the beaches for the U.S. troops to assault then receiving wounded and dying U.S. Marines as a standby Hospital ship.  There was no rest for Uncle Joe and the sailors aboard the USS President Polk, receiving orders to sail to Iwo Jima to pick up hundreds of wounded U.S. Marines and take them to Hawaii.  The USS President Polk then received Orders to ferry U.S. Marines and cargo to Okinawa on July 24, 1945. By this time, Uncle Joe had spent almost all of his time picking up and dropping off fresh U.S. Marines and taking on the dying and wounded which had just disembarked on cargo nets only hours earlier. I can’t imagine what was going on in Uncle Joe’s mind as he made friends with the fresh recruits before and after the Battles.  Some alive and wounded, others dying on the stretchers.  It must have been heartbreaking to say the least and to have endured time and again while doing his duty.   Uncle Joe spent many days performing his duties, spending much of his time with the wounded and dying men on his ship during his tenure aboard the USS President Polk. The USS President Polk was awarded 6 battle stars for her service in World War II.  I did not meet Uncle Joe for many years after the war, as I was not born until 1961.  I will always remember his incredible smile and infectious laughter which could light up a room.  Uncle Joe loved life and appreciated every day he had on this Earth.  He never showed his emotional wounds. I like to think that the world was a better place because of Joe Rivera and his three brothers who answered the call.  Uncle Joe returned from the war and married my Aunt Sylvia Rivera, together they raised 6 wonderful children in Yoakum, Texas. Uncle Joe will be sorely missed by all who knew and loved him. I have a special place in my heart for my Uncle Joe.  God bless him.  He embodied all that was good and decent in a man and we all learned by his example.  May he Rest in Eternal Peace.  We must never forget all those who fought in that horrible conflict, many paid the ultimate price for their duty and many came home wounded and emotionally scarred for life.