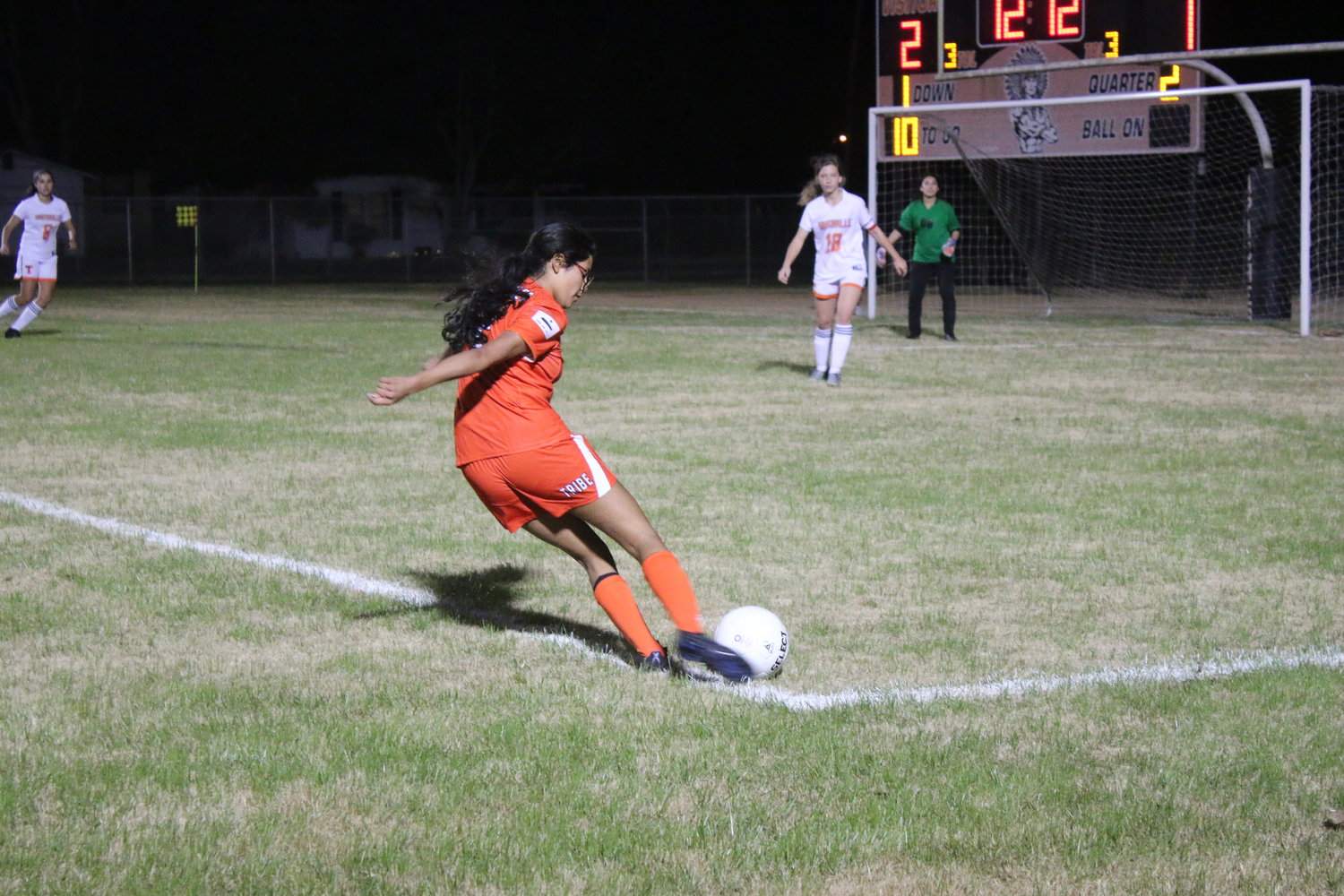 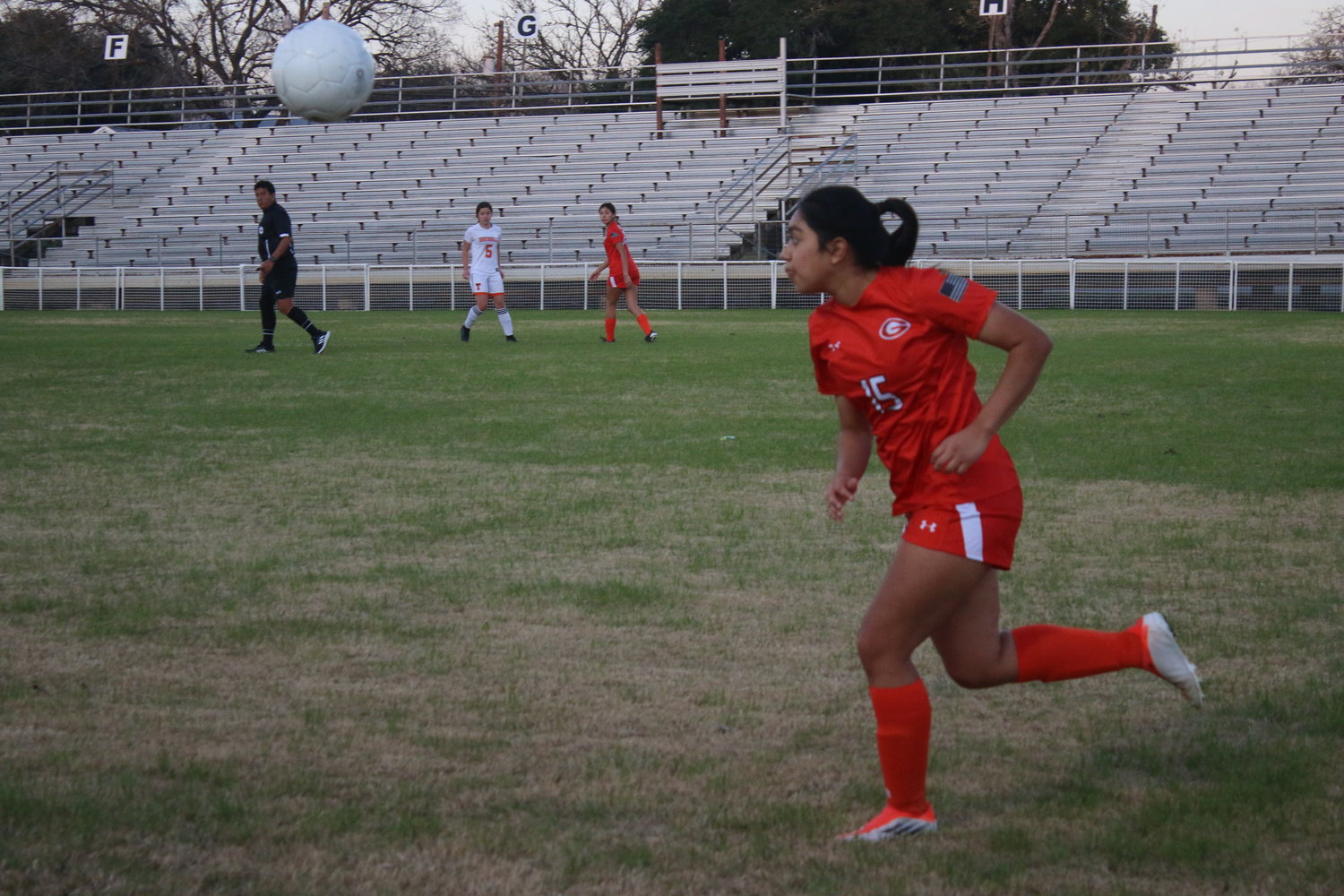 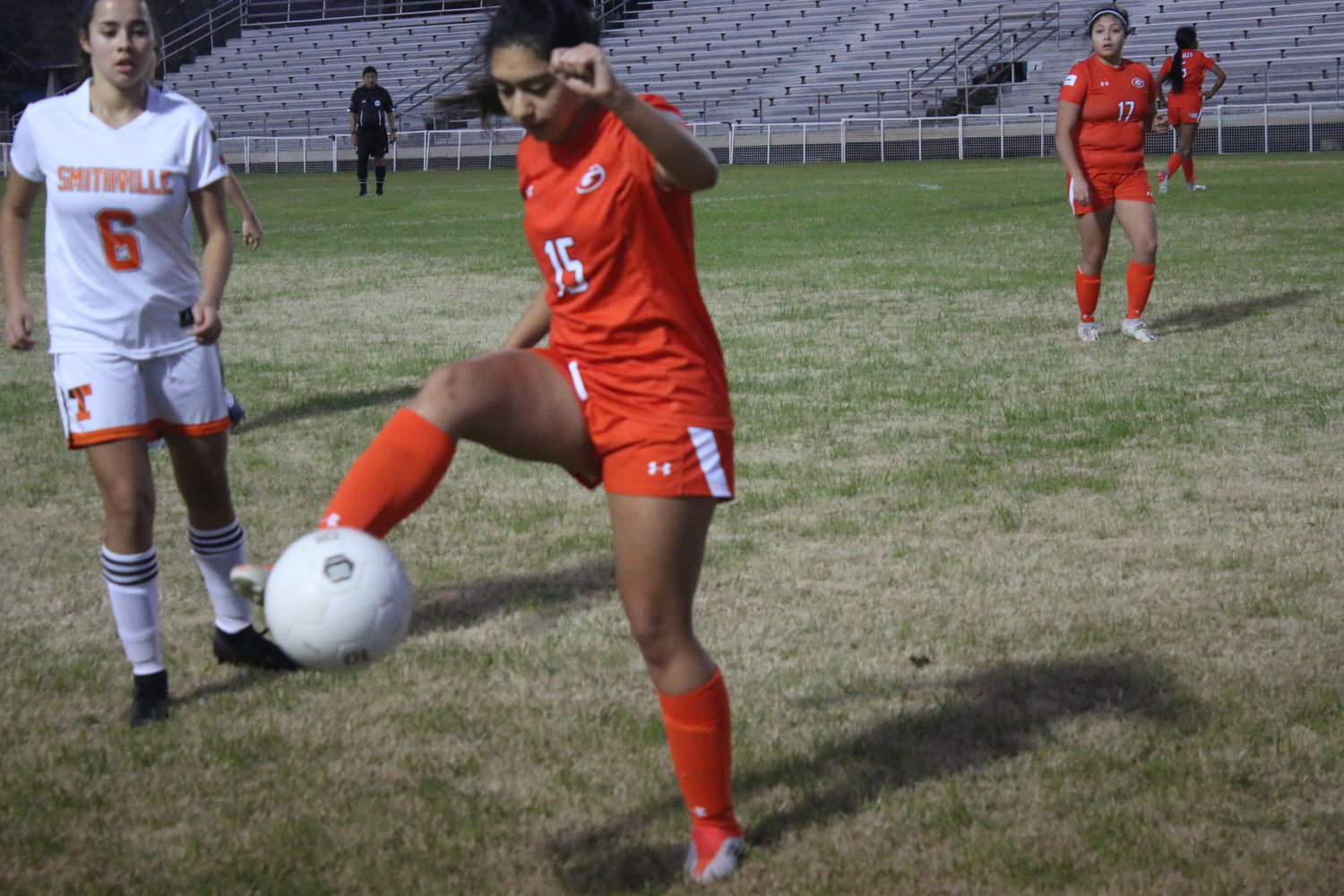 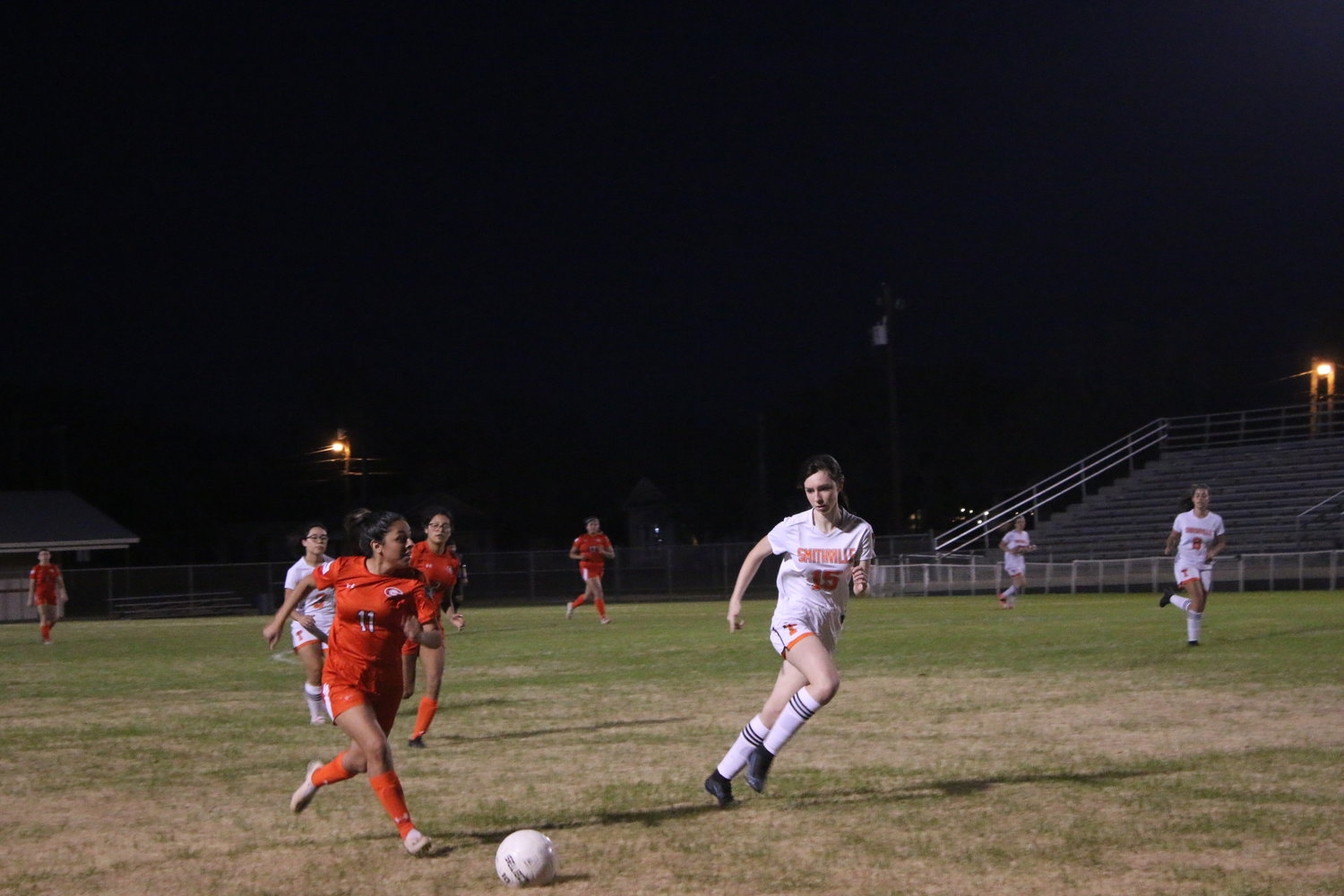 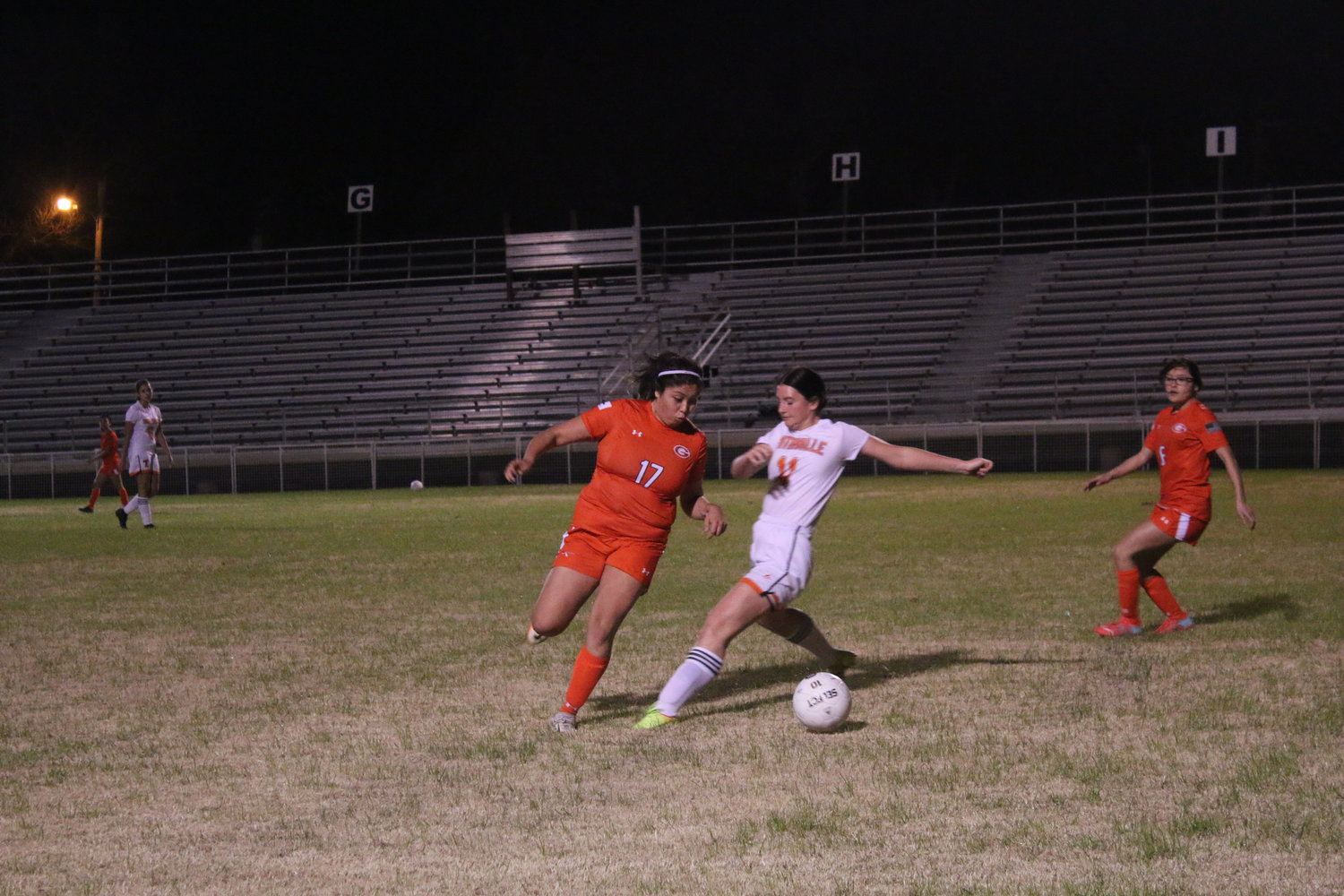 Fans could be excused if they left Apache Field feeling a little seasick Tuesday night. The Lady Apaches’ 2-2 draw with Smithville had more than a few high and lows.

The game for Gonzales could easily be summed up by a famous quote from Don Adams’ Agent 86 of Get Smart, “Missed it by THAT much.” Gonzales had to settle for the draw, despite dominating much of the contest, having nearly four times the number of shots the Lady Tigers had on the night.

“We just weren’t finishing our shots,” said Coach Karen Bunch. “We weren’t following [the ball] in, and that’s something we gotta work on to execute.”

Gonzales had four scoring opportunities go awry midway through the first half. Two great saves by the Smithville goal keeper and two shots went wide of the net—one aided by a strong southerly wind.

It was Smithville that broke the seal on the scoring, playing a miscue by the Gonzales defense on a corner kick to put the ball in the back of the net in the 24th minute of the match. That would be the only score of the first half, thanks, in part, to a strong defensive effort by the Lady Apaches.

“One of the biggest things we try...to do is just keeping possession [of the ball],” said Bunch. “That’s the biggest key—just keep possession and make good passes.”

Passing was key on offense for Gonzales, too, as they tied the match in the 55th minute of the second half with a centering pass to Nancy Nino, who was able to get the ball past the diving goal keeper.

Smithville quickly regained the lead less than a minute later when the Lady Tigers were able to slip past the Apache defense and convert the shot on goal.

The game settled into a midfield struggle until, with 10 minutes remaining, Paola Perez put a shot on goal that deflected back to Nino, who scored the equalizer, her second score of the night. Both teams had opportunities down the stretch, but the game ended with the 2-2 draw.

Gonzales is now 2-1-3 on the season. They are off this weekend, but will return to the pitch on Tuesday, Jan. 25, against Great Hearts Monte Vista.

Like their male counterparts the week before, the Gonzales Lady Apaches were in tournament action in Seguin last weekend and held their own against bigger schools, going 1-1-2 in four games.

On Thursday, Gonzales squared off against the Lehman Loboes, out of Kyle, TX, and were defeated by a final of 2-0. They bounced back in their nightcap, however, to down the Hondo Owls, 6-0.

It was Friday’s contests that left Coach Bunch most impressed, however, the Lady Apaches came away with a pair of 0-0 draws against 6A Seguin and 5A Cedar Creek, two very talented squads.

“That’s two [larger] schools and we played really well against them,” said Bunch. “We lost, 2-0, to [Lehman] and they ended up winning the tournament, so we were happy with [how we competed].”